Though Hillary’s book of excuses, entitled “What Happened,” won’t be released until September 12th, a newly revealed excerpt shows that, after 229 pages dedicated to blaming everything from Trump to Russian hackers, racism, misogyny, etc, by page 230 she finally gets around to blaming Bernie Sanders.  Actually, if you review the following very powerful paragraph closely enough you’ll notice that Hillary is able to succinctly blame Bernie, Obama and her entire 2016 campaign staff in just a couple of sentences.

“Throughout the primaries, every time I wanted to hit back against Bernie’s attacks, I was told to restrain myself.  Noting that his plans didn’t add up, that they would inevitably mean raising taxes on middle-class families, or that they were little more than a pipe dream – all of this could be used to reinforce his argument that I wasn’t a true progressive.  My team kept reminding me that we didn’t want to alienate Bernie’s supporters.  President Obama urged me to grit my teeth and lay off Bernie as much as I could.  I felt like I was in a straightjacket.” 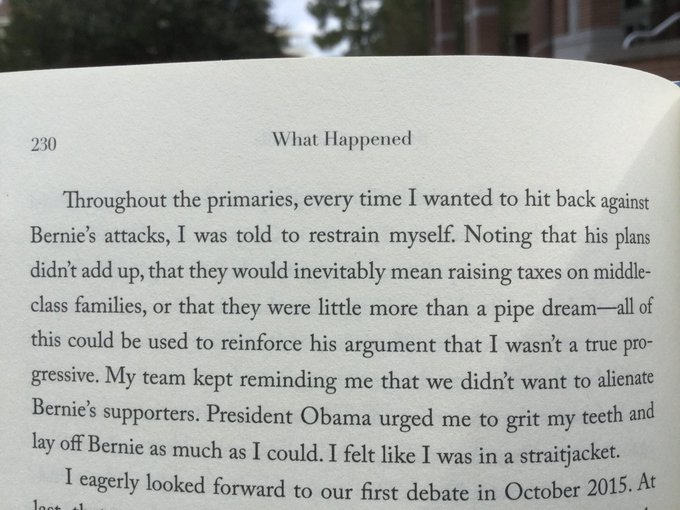 “President Obama urged me to grit my teeth and lay off Bernie as much as I could. I felt like I was in a straitjacket.” – HRC

Not surprisingly, according to further insights from CNN, Hillary goes on to point out that Bernie’s supporters, much like Trump’s, were only motivated by sexism…it’s just obvious really.

She said that his attacks against her during the primary caused “lasting damage” and paved the way for “(Donald) Trump’s ‘Crooked Hillary’ campaign.”

Clinton, in a book that will be released September 12 entitled “What Happened,” said Sanders “had to resort to innuendo and impugning my character” because the two Democrats “agreed on so much.”

“Some of his supporters, the so-called Bernie Bros, took to harassing my supporters online. It got ugly and more than a little sexist,” she wrote.

“When I finally challenged Bernie during a debate to name a single time I changed a position or a vote because of a financial contribution, he couldn’t come up with anything,” Clinton wrote. “Nonetheless, his attacks caused lasting damage, making it harder to unify progressives in the general election and paving the way for Trump’s ‘Crooked Hillary’ campaign.”

Sure, it wasn’t her laundry list of personal scandals that caused Trump’s “Crooked Hillary” campaign to stick…nope, it was Bernie that created that monster.

Finally, just when you thought you’d heard every excuse imaginable, Hillary takes her ‘blame game’ to a whole new level by viciously calling out the movie “There’s Something About Mary” for her 2016 defeat.

She noted that Jake Sullivan, her top policy aide, told her that Sanders’ campaign strategy reminded him of a scene from the movie “There’s Something About Mary,” where a hitchhiker says he has a plan to roll out seven-minute abs to top the famous eight-minute abs.

“Why, why not six-minutes abs?” Ben Stiller’s character asks.

Clinton wrote: “That’s what it was like in policy debates with Bernie. We would promise a bold infrastructure investment plan or an ambitious new apprenticeship program for young people, and then Bernie would announce basically the same thing, but bigger. On issue after issue, it was like he kept promising four-minute abs, or even no-minutes abs. Magic abs!”

For those who missed it, here is the scene from “There’s Something About Mary” that apparently tanked Hillary’s shot at the White House…