Editor’s Note: On Monday we highlighted the fact that China wis massing some 150,000 troops on the North Korean border. At the time, we asked whether China was sending a thinly veiled message to President Trump warning him not to interfere on the Korean peninsula, or whether China could be preparing its own offensive against Kim Jong Un’s regime. It appears now that whatever discussions were had between U.S. President Donald Trump and Chinese President Xi over the weekend, the result was cooperation against the North Korean nuclear program. As reported by Zero Hedge, China has now warned North Korea that it will take direct military action against their nuclear facilities, something Trump himself threatened to do, should Un cross any red lines. China, it seems, is now a U.S. ally in the region. Of course, things are moving at such a rapid pace it is hard to nail down exactly what is taking place on the geo-political stage. One day we’re at peace with EastAsia… The next day there could be mushroom clouds.

With everyone putting down new and/or revised “red lines“, be it on Syria or North Korea, it was now China’s turn to reveal its “red” or rather “bottom line”, and in a harshly worded editorial titled “The United States Must Not Choose a Wrong Direction to Break the DPRK Nuclear Deadlock on Wednesday” Beijing warned it would attack North Korea’s facilities producing nuclear bombs, effectively engaging in an act of war, if North Korea crosses China’s “bottom line.”

The editorial in the military-focused Global Times tabloid, owned and operated by the Communist Party’s People’s Daily newspaper, said that North Korea’s nuclear activities must not jeopardize northeastern China, and that if the North impacts China with its illicit nuclear tests through either “nuclear leakage or pollution”, then China will respond with force.

“China has a bottom line that it will protect at all costs, that is, the security and stability of northeast China… If the bottom line is touched, China will employ all means available including the military means to strike back. By that time, it is not an issue of discussion whether China acquiesces in the US’ blows, but the Chinese People’s Liberation Army (PLA) will launch attacks to DPRK nuclear facilities on its own.”

This, as the editorial puts it, is the “bottom line” for China; should it be crossed China will employ all means available including the military means to strike back,” warned the editorial. 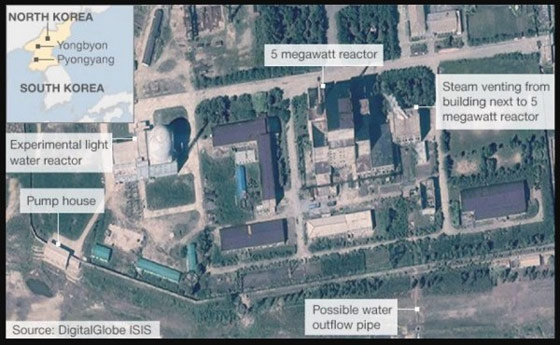 It is worth noting is that shortly after publication, the article seems to have been retracted without explanation, the URL now returning a “404” error. However not before the original article was cached on a webpage owned by China Military, courtesy of google.

In the editorial, the author also declared that the “People’s Liberation Army (PLA) will launch attacks to DPRK nuclear facilities on its own. A strike to nuclear facilities of the DPRK is the best military means in the opinion of the outside world.” The northeastern Chinese provinces of Liaoning and Jilin share borders with North Korea. These two provinces and Heilongjiang are part of the Shenyang Military Region, one of seven military regions of the People’s Liberation Army.

The editorial also explained the advantages to the world of a Chinese attack on North Korea’s nuclear facilities.

It noted China and the world know the locations of North Korea’s nuclear facilities. Once the PLA attacks these nuclear sites, North Korea will permanently suspend its nuclear weapons programs.
North Korea “has limited resources of nuclear materials and is strictly blockaded in the outside world, erasing the possibility for DPRK to get the materials again.”

China also noted that “nuclear weapons is DPRK’s trump card for its defiance of China and the United States. Once this card is lost, it will become obedient immediately.”

The report also said that “the DPRK must not fall into the turmoil to send a large number of refugees, it is not allowed to have a government that is hostile against China on the other side of the Yalu River, and the US military must not push forward its forces to the Yalu River.” It notes that “this sentence is meant for the United States, because the premise of it is that the US military has launched attacks to the DPRK.”

But what may be the most notable part of the oped is the mention in the Global Times editorial that North Korea will not be “not allowed to have a government that is hostile against China on the other side of the Yalu River.”  This implies that if and when the US initiate strikes on NK, the Chinese PLA will likely send out troops “to lay the foundation” for a favorable post-war situation.

In other words, China may be just waiting for Trump to “decapitate” the North Korean regime, to pounce and immediately fill the power vacuum.

Mike Cernovich Bombshell: Trump is Being Manipulated Into Sending 150,000 Troops to Syria

Navy Deploys Anti-Submarine Aircraft Off California Coast: “Speculation That A Russian Or North Korean Sub Has Been Spotted”

Did the U.S. Supreme Court Just Nullify the U.S. Constitution?

When This Ends, Everybody Gets Hurt