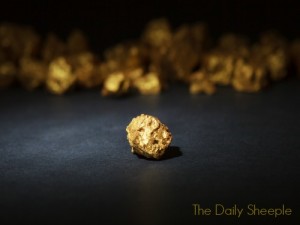 If you were to ask most economists and investors what they thought of gold and silver right now, they would probably have a good chuckle at your expense, and explain that these precious metals are overrated. What with the dollar on such a long winning streak, and the stock market reaching record highs, you’d be crazy to invest in commodities.

However, the big banks don’t see it that way. Last week, the financial community was shocked to discover that JP Morgan has accumulated 55 million ounces of silver since 2012, with 8 million of those ounces being purchased in the past few weeks. Do they know something that the man on the street doesn’t? Well yes actually, they do. Right around same time JP Morgan started their latest silver buying spree, their CEO flat-out told his shareholders that:

Some things never change — there will be another crisis, and its impact will be felt by the financial market.

The trigger to the next crisis will not be the same as the trigger to the last one – but there will be another crisis. Triggering events could be geopolitical (the 1973 Middle East crisis), a recession where the Fed rapidly increases interest rates (the 1980-1982 recession), a commodities price collapse (oil in the late 1980s), the commercial real estate crisis (in the early 1990s), the Asian crisis (in 1997), so-called “bubbles” (the 2000 Internet bubble and the 2008 mortgage/housing bubble), etc. While the past crises had different roots (you could spend a lot of time arguing the degree to which geopolitical, economic or purely financial factors caused each crisis), they generally had a strong effect across the financial markets

Of course, JP Morgan is not alone. Citibank recently announced that they were going to swap $1 billion for a portion of Venezuela’s gold. Nicolas Maduro’s cash-strapped regime is so desperate for revenue, that they’ve agreed to pawn 1.4 million ounces of gold, which amounts to $714 per ounce.

“He had to pawn their gold. That’s what they’ve done. They can buy it back. They have rights of first refusal,” said Dennis Gartman, publisher of The Gartman Letter. “They went to the biggest pawnbroker of gold—Citibank.”

Surely they aren’t doing this out of the goodness of their heart. They know that bankrupt nation will never be able to buy it back, and in all likelihood the price of gold is going to increase as soon as the latest stock market bubble pops. They’re about to make out like bandits.

They also have a little-known ace in the hole. Last week I wrote about an economist from Citigroup (which is, of course, the same company that owns Citibank) who expressed his desire to get rid of cash entirely. By ridding the world of paper money and forcing all transactions to become digital, they’ll be able to enforce negative interest rates on everyone with a bank account.

I explained that this move would backfire on the government and the banks, because people will always need a way to save their money. And if saving money in the bank means that you’ll really be losing money, then most logical people will start buying real world commodities with inherent value. That would most likely include gold and silver, and in the long run it could end up fueling the black market.

However, I may have spoken too soon when I suggested that these banks don’t understand the consequences of banning cash. Now I think they know exactly what they’re doing. They know that the government would love to have a cashless society, because it would make it so much easier to track and tax us. So they’re going to let the politicians do the dirty work for them with legislation, while they position themselves to profit from the aftermath. If our society goes cashless, then there will be an exodus from the dollar, and into physical gold and silver.

They know it’s going to split our economy in two. There will be the legitimate economy that deals in traceable digital currencies, and there will be a massive informal economy that deals in gold and silver. When the cashless society arrives, they will profit in both arenas.  They’re going to make a ton of money by imposing negative interest rates on the cashless dollar, and they’re going to profit even more on gold when the dollar exodus causes its value to go through the roof.

They are in short, setting themselves up to dominate every facet of the future global economy.

Contributed by Joshua Krause of The Daily Sheeple.

Joshua Krause is a reporter, writer and researcher at The Daily Sheeple. He was born and raised in the Bay Area and is a freelance writer and author. You can follow Joshua’s reports at Facebook or on his personal Twitter. Joshua’s website is Strange Danger .

Collapse Reality: This Is What The Tap Water Looks Like In Venezuela