For Thierry Meyssan, the rise of tension in the Gulf has nothing to do with an alleged Iranian threat. In fact, it is the second round of Mossadegh’s anti-imperialist policy, before the mollahs. Just as in 1952, London is ready to go to war to defend its undeserved economic advantages. But if the British were to win this round, a few years later they would lose in Suez to the United States. 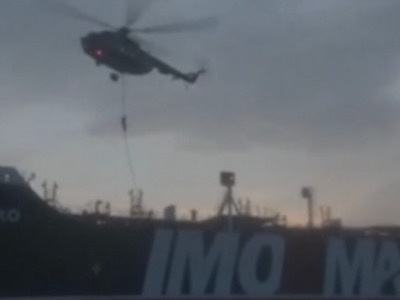 At the end of the Second World War, the United Kingdom balked at the idea of abandoning its Empire. It created independent central banks everywhere in order to continue to plunder its ex-colonies once they became independent, and companies poised to grab half of the national wealth.

The Shah’s Prime Minister, Mohammad Mossadegh, could not accept that London should confiscate his country’s oil and steal 50% of its profits via the Anglo-Iranian Oil Company (AIOC). He therefore nationalised the company. But the AIOC was the property of the British Ministry for the Marine, and London feared that this example may spread to all of the third world.

Seen from the West, Iran is a dangerous competitor.

Defending his Empire, His Majesty’s Prime Minister, Winston Churchill, convinced his US partner, President Dwight D. Eisenhower, to overthrow Mossadegh. This was Joint Operation AJAX, implemented by MI6 and the CIA and directed by Kermit Roosevelt and Herbert N. Schwarzkopf. The former was the grandson of President Theodor Roosevelt, who colonised Latin America, and the latter was the father of General Norman Schwartzkopf, who directed the Gulf War against Saddam Hussein.

Then the Anglo-US bloc set up General Fazlollah Zahedi as Prime Minister, and created a cruel political police, the SAVAK, by recycling ex-Nazi Gestapo criminals. The Iranian people paid a bloody tribute for its desire for true independence.

Operation AJAX was a success for the Anglo-US. It supplied the model for false revolutions aimed at changing recalcitrant régimes, but above all, it set back the liberation of colonised people by 35 ans.

When the same USA overthrew Shah Reza Pahlevi, who was preparing a world increases in oil prices via the OPEC, they thought they were making a smart choice by organising his succession with France – the return of Imam Rouhollah Khomeini. But the cow-boys never attained the same levels of subtlety as their English mentors. BOOM! Iran once more became the champion of the anti-imperialist struggle, as it had been before the Islamic régime.

This is the conflict which is resurfacing today. As in the time of Mossadegh, Iranian oil production collapsed under the weight of Western threats. The Royal Navy seized an Iranian oil tanker (the Rose Mary in July 1952, and Grace 1 at Gibraltar in 2019). As always, the British pretend that the Law is on their side, but in fact they have only their arrogance. In Mossadegh’s time, they accused Iran of exporting oil which had been stolen from them (because they refused nationalisation), and today, claim that Iran is violating European sanctions (although these specific sanctions themselves violate international Law).

There is the possibility of a third way. While London and Washington were allies in 1952, they progressively became rivals, and in 1957, the United States grabbed part of the British Empire during the Suez crisis. At that time, Washington participated in the British negotiations with Gamal Abdel Nasser. It saw the rapprochement of France to the English and the Israëlis, but did not act until they launched their irreparable expedition. Today, the United States maintains its distance from the United Kingdom, and could benefit from a false move by London to « save peace » by ousting it from the Gulf. British advisors are present in Saudi Arabia, in Bahreïn, the Emirates, Oman and Qatar.

Washington is pursuing two objectives facing Iran. The first is to destroy its State structures, as it did in Afghanistan, Iraq and Libya, and attempted to do in Syria. This is the Rumsfeld/Cebrowski strategy . The second aims to control the export of Iranian hydrocarbons in order to regulate the world market. This is the Trump/Pompeo strategy. The dialectic concerning the nuclear programme is no more than cheap grandstanding which everybody knows to be phantasmagorical.

It could be that, tangled up in a Brexit that arrived too late and has become impossible to manage, Whitehall may insist on defending the shreds of its Empire. The collapse of Theresa May’s government makes it susceptible to give in to any crazy adventure.