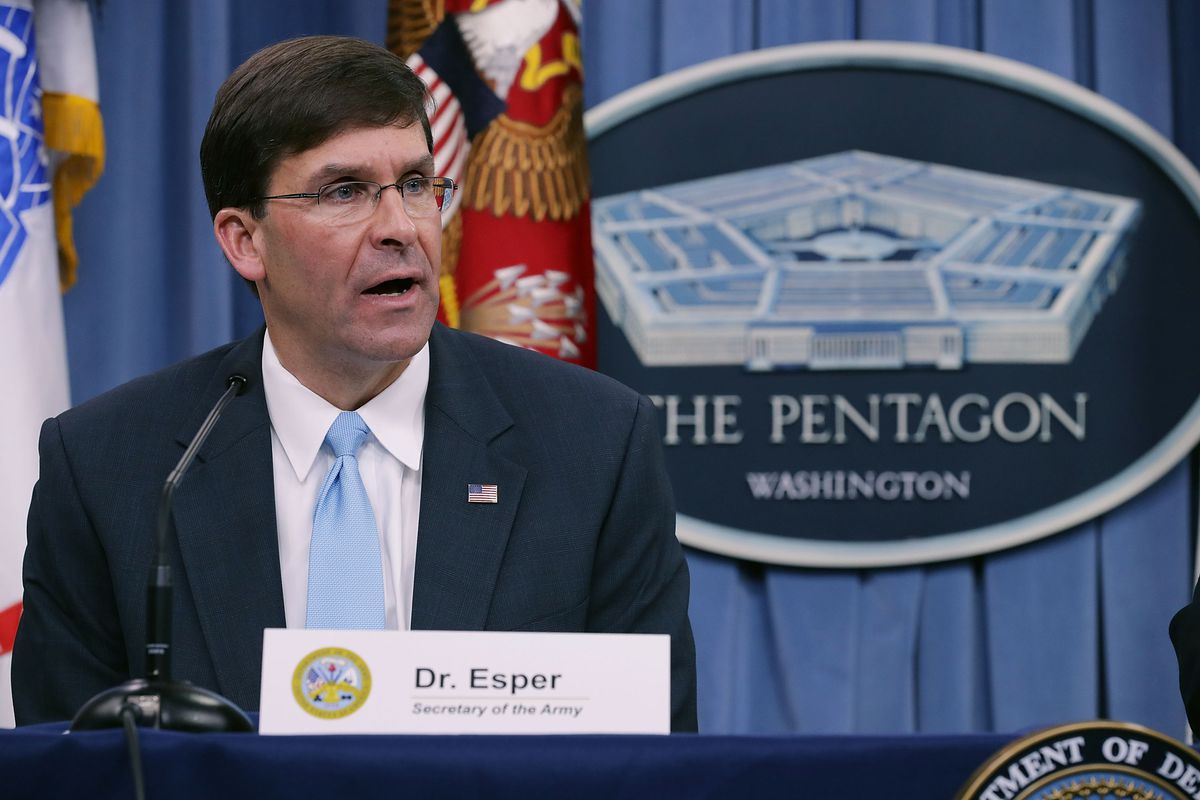 Mark Esper is expected to be confirmed in coming days as the new US Secretary of Defense. His appointment is awaiting final Congressional approval after customary hearings this week before senators. The 55-year-old nominee put forward by President Trump was previously a decorated Lieutenant Colonel and has served in government office during the GW Bush administration.

But what stands out as his most conspicuous past occupation is working for seven years as a senior lobbyist for Raytheon, the US’ third biggest military manufacturing company. The firm specializes in missile-defense systems, including the Patriot, Iron Dome and the Aegis Ashore system (the latter in partnership with Lockheed Martin).

As Defense Secretary, Esper will be the most senior civilian executive member of the US government, next to the president, on overseeing military policy, including decisions about declaring war and deployment of American armed forces around the globe. His military counterpart at the Pentagon is Chairman of the Joint Chiefs of Staff, currently held by Marine General Joseph Dunford who is expected to be replaced soon by General Mark Milley (also in the process of senate hearings).

Esper’s confirmation hearings this week were pretty much a rubber-stamp procedure, receiving lame questioning from senators about his credentials and viewpoints. The only exception was Senator Elizabeth Warren, who slammedthe potential “conflict of interest” due to his past lobbying service for Raytheon. She said it “smacks of corruption”. Other than her solitary objection, Esper was treated with kid gloves by other senators and his appointment is expected to be whistled through by next week. During hearings, the former lobbyist even pointedly refused to recuse himself of any matters involving Raytheon if he becomes the defense boss.

As Rolling Stone magazine quipped on Esper’s nomination, “it is as swampy as you’d expect”.

“President Trump’s Cabinet is already rife with corruption, stocked full of former lobbyists and other private industry power players who don’t seem to mind leveraging their government positions to enrich themselves personally. Esper should fit right in,” wrote Rolling Stone.

The linkage between officials in US government, the Pentagon and private manufacturers is a notorious example of “revolving door”. It is not unusual, or even remarkable, that individuals go from one sector to another and vice versa. That crony relationship is fundamental to the functioning of the “military-industrial complex” which dominates the entire American economy and the fiscal budget ($730 billion annually – half the total discretionary public spend by federal government).

Nevertheless, Esper is a particularly brazen embodiment of the revolving-door’s seamless connection.

Raytheon is a $25 billion company whose business is all about selling missile-defense systems. Its products have been deployed in dozens of countries, including in the Middle East, as well as Japan, Romania and, as of next year, Poland. It is in Raytheon’s vital vested interest to capitalize on alleged security threats from Iran, Russia, China and North Korea in order to sell “defense” systems to nations that then perceive a “threat” and need to be “protected”.

It is a certainty that Esper shares the same worldview, not just for engrained ideological reasons, but also because of his own personal motives for self-aggrandizement as a former employee of Raytheon and quite possibly as a future board member when he retires from the Pentagon. The issue is not just merely about corruption and ethics, huge that those concerns are. It is also about how US foreign policy and military decisions are formulated and executed, including decisions on matters of conflict and ultimately war. The insidiousness is almost farcical, if the implications weren’t so disturbing, worthy of satire from the genre of Dr Strangelove or Catch 22.

How is Esper’s advice to the president about tensions with Russia, Iran, China or North Korea, or any other alleged adversary, supposed to be independent, credible or objective? Esper is a de facto lobbyist for the military-industrial complex sitting in the Oval Office and Situation Room. Tensions, conflict and war are meat and potatoes to this person.

During senate hearings this week, Esper openly revealed his dubious quality of thinking and the kind of policies he will pursue as Pentagon chief. He told credulous senators that Russia was to blame for the collapse of the Intermediate-Range Nuclear Forces (INF) Treaty. That equates to more Raytheon profits from selling defense systems in Europe. Also, in a clumsy inadvertent admission he advised that the US needs to get out of the INF in order to develop medium-range missiles to “counter China”. The latter admission explains the cynical purpose for why the Trump administration unilaterally ditched the INF earlier this year. It is not about alleged Russian breaches of the treaty; the real reason is for the US to obtain a freer hand to confront China.

It is ludicrous how blatant a so-called democratic nation (the self-declared “leader of the free world”) is in actuality an oligarchic corporate state whose international relations are conducted on the basis of making obscene profits from conflict and war.

Also at a precarious time of possible war with Iran, the last person Trump should consult is someone whose corporate cronies are craving for more weapons sales.

Obama Set to Veto any Cuts to Pentagon War Machine