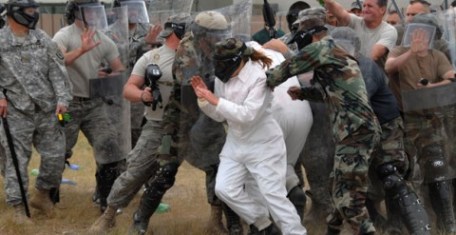 Military, police and homeland security units have all long been preparing for riots and widespread civil unrest during a prolonged collapse.

What is the anatomy of a breakdown?

And everyone knows that game can’t continue. The question is how it will play out, and how long the game will be.

The Federal Reserve finally announced rate hikes – planning one incremental increase after another throughout the coming Trump Administration.

Close to a decade of stimulus, quantitative easing, zero interest rates and easy money for those on top is coming to an end. For all those who have borrowed, it means that the burden of debt is coming due – and the biggest borrower of all, the U.S. government, will face huge new costs in the form of increased interest on $14 trillion in debt:

Rising interest rates help savers and hurt borrowers. As the biggest borrower on the planet, the U.S. government will soon begin paying more to investors holding roughly $14 trillion in Treasury debt.  “As debt continues to grow and interest rates return toward more normal levels, interest spending is slated to be the fastest growing part of the budget.” (source)

This crunch could impact state, businesses, municipalities and individual households in a big way as well. Meanwhile, the presidency of Donald Trump has changed the surface of the political landscape entirely, and no one is quite sure what will happen – though plenty on the left have been casting Trump as a neo-Hitlerian figure.

Brandon Smith, who runs Alt-Market.com, may not know the future either, but he has developed a very strong track record for predicting the “surprise” victories for Brexit in the UK, and for Trump in the U.S.

But he didn’t just predict their win at the polls, but that these new signposts of the conservative, populist uprising would be used by the elite – who allowed these electoral changes – in order to scapegoat the coming financial collapse.

As things continue to play out, he has been so far proven stunningly accurate, and should not be readily ignored.

Will Trump’s presidency be better understood in hindsight as what has already been dubbed: ‘Operation Shift Blame’?

Here’s what Brandon Smith said a couple of weeks ago in a focused interview with the X22 Report:

The Elite Already Have The Collapse Planned, ‘Operation Shift Blame’ Is A Go: Brandon Smith

As Brandon Smith argues in the interview, the Trump presidency, if he is right, is all about having a scapegoat for the crash of the economy during his watch.

If the populists, nationalists, and conservatives are blamed, then their views are discredited, and momentum for gets to control the aftermath – and restore order to the system – falls back to the establishment that has, until now, been the target of growing disdain by a population over-run by the status quo and its series of disasters.

But with Trump – undeniably a spectacle to all Americans – the elite have a narrative that will keep people fighting among themselves, divided by race, gender, politics and ideology.

Though President Obama and the circles in Washington keep insisting the economy is recovering, improving and providing, nothing could be further from the truth.

The economy has been “kept on life support” since 2008, when there should have been a bigger crash… but that, too, will come due. They’ve been artificially propping up the system with stimulus measures, and simply stopping that intervention will usher in a collapse. According to Brandon Smith:

“They’re setting it up to where a crash occurs during a Trump presidency, and Trump and conservatives are blamed in the process.”

It won’t happen overnight. The economic collapse is a “process, not an event” – one that takes place over the course of several years, even a decade. According to Brandon Smith, 2017 will likely see a major acceleration of that collapse.

As the fiscal situation becomes more an more untenable, and the government more desperate to pay the bills, we will likely see government pensions confiscated, promises benefits reduced or delayed, and other measures to pay debts.

On the pretext of sustaining the financial stability of the system, banks may end up “locking out” accounts, seizing funds and account holders and investors could face severe haircuts.

America may well see credit freezes, shortages on the shelves, deliveries could stop, and people could lose their minds as ordinary life is interrupted. As Smith argues,

“Removing stimulus and ‘turning off the spigot’ will initiate collapse on its own…. and end up being worse than the Great Depression

Smith: “Whatever’s going to happen is going to happen between now and early 2018, because that’s their window of time to create enough chaos and desperation in order to convince people, to rationalize the idea of switching to a global currency system. After that, I would expect there would be a process of acclimating the public to this new system, and I would expect that a lot of countries would be in third world conditions for a while after that.”

A combination of hyperinflation, and deflationary pressures could further wreck the economy, and even decimate the value of the dollar. Further consequences could spiral out of control from there.

Already, there are plans on the books for government to use its nearly-unlimited powers to seize private assets at a personal or institutional level in order to meet the needs, perceived or real, of society. Numerous executive orders give fiat authority to the executive branch to wield dictatorial control and violate private property and personal assets – not the least of which will be private holdings in gold and silver.

The elites have long suggested that the rise of a truly global currency will replace the crash of the dollar system, and the severe economic decline of the United States.  This has been in the works for a long, long time.

The system is going to crash regardless… so, arguably, this is how they are planning for it to play out.

The only question left, is: how will you prepare?

For those who want to survive, and be as unscathed as possible, that means building up a supply of food, water, guns, gold, alternative heating and power, medicine, barter items and other essential supplies. It also means preparing psychologically to deal with the loss of income, the breakdown of groceries, supplies and easily-available goods; and it means to distancing oneself from the most vulnerable – and potentially unstable – segments of society.

In particular, it may be wise to leave major urban centers, or have a viable exit strategy to a place that is both rural and self-sustaining. Of course, these are major preparations that have to be made according to the individual needs of each family.

However, the time is past to pretend that these things are not happening; it is time to make some very serious plans for what you will do during what happens next.

Just look to Venezuela or India for a glimpse of how raw things can become once the fiat paper currency ceases to flow freely, or provide for the life that most have become accustomed to living.

“I think the plan is to kill the dollar’s world reserve status, and that will severely limit the dollar’s value on the global market. We’ll still have our green dollars, with the presidents, but the value will no longer be controlled by the Federal Reserve… I think the Federal Reserve will step aside for the IMF, and the IMF will become the new global mediator of currency values.”

The United States will be hit the hardest, with the reliance upon the dollar’s reserve currency status…. “and an extreme shift from first world down to third world living conditions. It will be a disaster, there will be people who will die during this process, [just as people did] during the Great Depression. It’s going to be a disaster.”

Because people in the general public aren’t prepared even to sustain a few days without power, food and water, people will be pushed into extremes – desperate, rioting, looting, violence, and other destructive behaviors that are hallmarks of a breakdown.

In short, the United States will see a debased situation that is unprecedented in its more than 200 year history. Even the Great Depression could be eclipsed by the extreme events to come – but again, it won’t happen overnight.

“Some will react violently, but I think the elites have staged the situation in such a way that a lot of people will be confused as to who to blame. And that’s the great advantage that they have, is that they’ve staged the situation to where, especially people on the left, they have an automatically built-in bias to blame either Donald Trump, or Republicans, or conservatives in general. On the right, I think you’re going to have a lot of conservatives blaming the left as [for] sabotaging Trump and ruining his chances of fixing things.”

“You’re also going to have all kinds of different, I think, events in between – black swan events, terrorist attacks – that really keep people confused and looking every other direction, except at the global bankers. That’s what they want… they don’t want anyone focused on them. They’re going to create as much gas as possible during all this to keep people at each other’s throats. They’re going to be sitting on the Riviera… and watching.”

“Because we are getting to a point in history where the globalists are more exposed than ever before – their schemes, who they are, the organizations they’ve built. If the general public becomes aware of who they are, and the fact that they’re behind this crash, it would be all over for them. You’re talking torches and pitchforks – so they need to keep mass confusion, and keep everyone focused on each other, and not them, or the entire apparatus falls apart.”

“If we can get enough people aware of, and focused on the bankers first… then we might be able to, at least, remove them from the picture and rebuild in a proper manner. What this is really all about is who is going to rebuild. The system is going to crash regardless, but we still can determine who rebuilds afterwards. If it’s them rebuilding, then we’re kind of done for, because they’re going to use the crisis as a rationale for centralizing everything into their one world system. If we can remove them from the picture, then we might have the chance to rebuild a freer system.”

If things get bad enough, there could be an actual civil war again in America – in fact, it may become unavoidable.

People are at extreme right now, and the divisions between the left and right are, in many respects, deeper than they have ever been.

Those who are addicted to government assistance are in for a rude awakening, and those who work for a living face the very real possibility of seeing the American Dream crushed once and for all, in an era from which there will be no turning back.

But the pages of history have not been written, and if they have, they still stand to be edited by real world events. If people get their heads wrapped around what is really happening, perhaps the true villains can be addressed, and power can be kept out of the hands in whom it is most dangerous.

Perhaps, there is a chance that liberty could one day be restored, but first, people must prepare to endure a long, hard fight.

The Prepper’s Blueprint: The Step-By-Step Guide To Help You Through Any Disaster

Brandon Smith: “Trump Will Be ALLOWED To Win,” Only to Be Blamed For The Coming Financial Crash

Strategic Relocation Guide: How To Position Yourself To Survive A Major TEOTWAWKI Event

Cabal Freaking Out Because of Trump – Wayne Jett