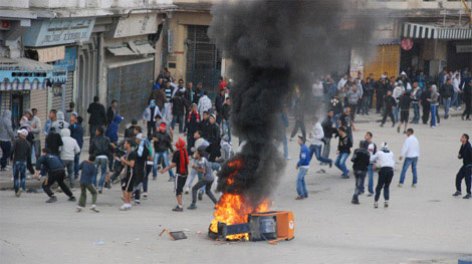 This article was written by Mike Adams and originally published at Natural News.com.

Editor’s Comment: Take a look at the possibilities – Trump could win the popular vote, but lose badly in the electoral college, or the “official” vote tally, for popular and electoral could be called for Hillary; Trump might even win the electoral college… maybe. Either which way this thing goes, there are going to be millions and millions of angry voters in this country, and there is no sense of normalcy at all. Things are at fever pitch, and the country is at a revolutionary point.

There is a usurper at work stealing the election – or so it would appear – and there is every chance that patriotic Americans aren’t going to stand for it. Whether they remain peaceful or not, there very well could be a clash with the police state, the establishment and their loyal media cohorts. Things could get very ugly in this country, and the constitutional republic may well be past the point of resuscitation. If there is violence, it may be staged; but either way this could be the kick off point from which we can never return. Then again, there is always the chance that life will go on, not too much differently then it always has… but that seems to be a very low chance. What do you think will happen?

My ANALYSIS of possible outcomes from the upcoming presidential election reveals that America only has a 5% chance of remaining peaceful after November 8. This does not mean the violence will occur on November 9th, but rather that events will be set into motion on that day which will lead to an escalation of violence (95% chance, see below).

Here are the scenarios I see unfolding, all based on the best available information right now:

There are three sub-scenarios under this outcome:

Even though Donald Trump wins the popular vote, the democrats have bribed enough electoral college representatives to sway the vote to Clinton, even in contradiction to their own states’ voters.

Should this occur, expect mass protests, violence, bloodshed and many legal challenges in those states where the electoral college votes do not reflect the popular vote. There is no question that the Trump-supporting citizens of America will not accept a “rigged” election outcome where the electoral college votes are essentially stolen from the People. This would very quickly escalate into armed citizens marching in the streets and occupying key government buildings in an armed revolution against corruption.

In my analysis, this is the most likely outcome of the upcoming election, and the democrats have been planting this narrative in advance with ridiculous claims that “the Russians” are running Wikileaks and that Trump is a “Putin puppet” (direct claim from Hillary Clinton in the third debate).

The purpose of all this is to create the narrative where a Trump victory can be declared invalid by Obama. Despite all the talk among democrats about how much they love and respect democracy, the simple truth is that they deeply hate it (and don’t trust it). There is almost no chance that Obama and the Clintons will voluntarily cede power to Donald Trump.

If Obama declares a Trump victory invalid, all hell breaks loose across the nation, with leftists going “full terrorism” and patriots taking up arms to defend democracy against the anti-American traitors in Washington D.C.

Even if Obama and the Clintons admit defeat and agree that Donald Trump is the next President, the liberal voters go nuts and begin firebombing buildings all across America. You’ll see mass riots breaking out everywhere. Obama can then use this to declare Martial Law and, if he wishes, postpone the transfer of power to Donald Trump (or blame him for all the violence, of course).

Remember, the democrats are already running mass staged violence across America (ProjectVeritasAction.com). They can easily stage riots, arson, bombings and much more in order to maximize chaos in the streets.

Based on current information (and considering just how much the “official” polls are completely rigged by deliberately oversampling democrats), in my analysis, there is only a 25% total chance that Hillary Clinton wins the popular vote. Here are the sub-scenarios under that 25%:

Scenario 2A (20% chance): Clinton wins the reported vote, but Trump challenges the validity of the election results

This scenario very likely starts with legal challenges to the mass election fraud, but could quickly escalate to a military coup or an armed citizens’ revolt where outraged Americans literally march on Washington and depose the corrupt regime in power.

Expect huge bloodshed in this scenario. There is no question that roughly half of America simply cannot and will not accept Hillary Clinton as their president. She is too corrupt, too evil and too dangerous to maintain the consent of the governed. (Hillary Clinton is a serial criminal who must be indicted and imprisoned if America is to remain anything resembling a legitimate nation that respects law.)

Thanks to Wikileaks and Project Veritas, everyone with a working brain now knows the democrats are hopelessly corrupt and deeply invested in widespread voter fraud to steal the White House.

Scenario 2B (5% chance): Trump accepts the election results and tells supporters to get behind Hillary Clinton

If Clinton wins and Trump admits she won fair and square (which seems VERY unlikely), he could publicly call for everyone to back down and accept the Clinton presidency.

I see the chance of this at only 5%. And even then, so many conservatives and patriots are going to be so angry at this outcome that they may decide to stage their own peaceful protests.

95% chance of mass violence in one form or another

The upshot of all this is that I see only a 5% chance of a peaceful, non-violent outcome to this election. In most conceivable scenarios, America descends into mass violence of one form or another.

This is a direct result of the extreme polarization of political beliefs in America today, where we have an entire class of illiterate, ignorant Hillary Clinton supporters who only watch CNN and have no idea whatsoever that the Clintons are corrupt criminals. Witness the depth of the democrats’ corruption in this Project Veritas veritas (part 3), just released today:

On the other side, we have informed, awake Americans who understand how this election is their very last chance to restore democracy by voting against the corrupt establishment.

These two groups cannot reason with each other. They cannot compromise, and frankly, you can’t even reason with democrats anymore because they are all so propagandized and brain damaged that they have utterly abandoned the very concept of “facts.” (To them, a “fact” is anything Hillary Clinton says, while a “lie” is anything Donald Trump says.)

We are so far beyond the realm of reason that democrats are now essentially running America like a massive political CULT steeped in delusion and mental illness. Believing in the lies of Barack Obama and Hillary Clinton has very nearly become a psychiatric disorder, as their ideas are rooted in such lunacy that only a mentally ill person could possibly believe them (or vote for them).

If Clinton wins, it means we will all find ourselves living in a society of mentally ill zombies and cultists who are a danger to everyone (including themselves).

The global debt collapse will be initiated no matter who wins

Importantly, no matter who wins, the global debt collapse is imminent, which means the entire scam of Big Government, endless growth and high entitlement payouts is going to come to a catastrophic end. And that’s mathematically guaranteed to unfold no matter who wins the presidency.

Make sure you understand the if Donald Trump wins and takes office, the central bankers of the world will deliberately crash the system so that Donald Trump can be blamed for everything.

I’ve even published an entire video detailing this scenario. View it here:

This article was written by Mike Adams and originally published at Natural News.com.

Obama on Gun Control After Oregon: “We Collectively Are Answerable to Those Families”

10 Things About The U.S. News Media That They Do Not Want You To Know