Editor’s Note: Not that Sessions is any good for civil liberties in this country, but how many people in Trump’s administration are they going to claim lied about talking to the Russian Ambassador?

House Minority Leader Nancy Pelosi demands US Attorney-General Jeff Sessions resign for “lying under oath” during his confirmation hearings. Sessions’ spokeswoman said he was speaking of Trump campaign’s contacts with Russia, not of his own activities.

Late Wednesday evening, House Minority Leader Nancy Pelosi (D-California) released a statement calling on US Attorney General Jeff Sessions to resign over statements he made to the Senate during his confirmation process.

“Jeff Sessions lied under oath during his confirmation hearing before the Senate.  Under penalty of perjury, he told the Senate Judiciary Committee, ‘I have been called a surrogate at a time or two in that campaign and I did not have communications with the Russians.’ We now know that statement is false,” Pelosi wrote. 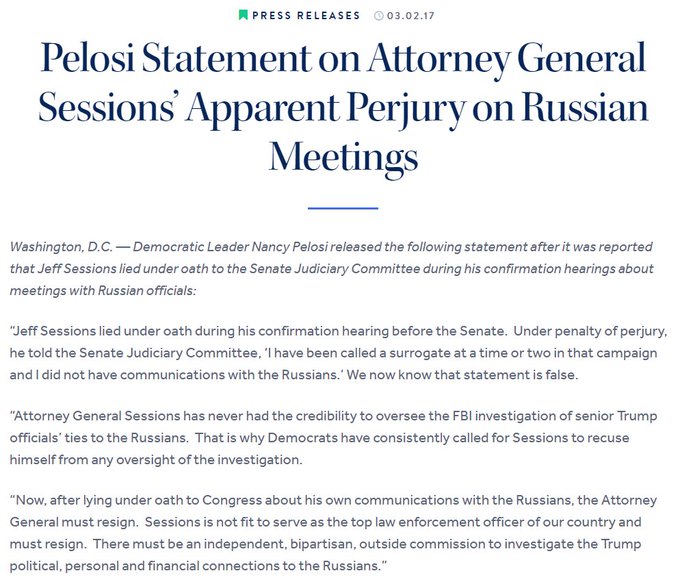 AG Sessions is not fit to serve as the top law enforcement officer of our country and must resign. https://goo.gl/quBJDa

Unnamed Justice Department officials told the Washington Post on Wednesday that Sessions spoke to Russian Ambassador to the US Sergey Kislyak twice last year, which would contradict statements Sessions made as US senator during Senate hearings for his confirmation to the Attorney General post.

“There was absolutely nothing misleading about his answer,” Sarah Isgur Flores, Sessions’ spokeswoman, said on Wednesday, commenting on the attorney-general’s remarks.

“He was asked during the hearing about communications between Russia and the Trump campaign — not about meetings he took as a senator and a member of the Armed Services Committee,” Flores stressed.

During his Senate judiciary committee hearing in January, Sessions told Senator Al Franken (D-Minnesota) that he “did not have communications with the Russians” after being asked what he would do if he found there had been conversations between individuals in the Russian government and the Trump campaign relevant to the election.

“I’m not aware of any of those activities,” Sessions said.

Sessions responded, “No,” when asked by Senator Patrick Leahy (D-Vermont) if he’d had contact with anyone connected with the Russian government “about the 2016 election, either before or after election day?”

“He was asked during the hearing about communications between Russia and the Trump campaign — not about meetings he took as a senator and a member of the Armed Services Committee,” Sessions spokeswoman Sarah Isgur Flores told the Washington Post.

The US intelligence community has assessed that Russia conducted cyber operations to benefit Trump and hurt Hillary Clinton during the 2016 presidential campaign.

Russia has denied accusations of meddling in the 2016 US election, and the Trump administration and campaign has done the same against allegations it had ties to Russia.

Sessions is not the first senior official in the new administration accused of talking to Russians. Earlier in February, General Michael Flynn resigned over his communications with Russian Ambassador to the US Sergey Kislyak.

Some US mainstream media, such as the New York Times and Washington Post, claimed that officials close to Vice-President Mike Pence said he believed Flynn was lying when he downplayed his conversation with Kislyak, based on unreleased transcripts of their talk.

In his own statement, Flynn explained that he “inadvertently briefed the vice-president-elect and others with the incomplete information regarding my phone calls with the Russian ambassador,” adding that he had “sincerely apologized to the president and the vice-president, and they have accepted my apology.”

“It wasn’t about sanctions. It was about the 35 guys [Russian diplomats expelled by the Obama administration over hacking allegations] who were thrown out,” Flynn told the Daily Caller just hours before his resignation. “So that’s what it turned out to be. It was basically, ‘Look, I know this happened. We’ll review everything.’ I never said anything such as, ‘We’re going to review sanctions,’ or anything like that.”

Contributed by RT.com of RT.com.

US AND RUSSIA ABOUT TO COME FACE TO FACE IN SYRIA