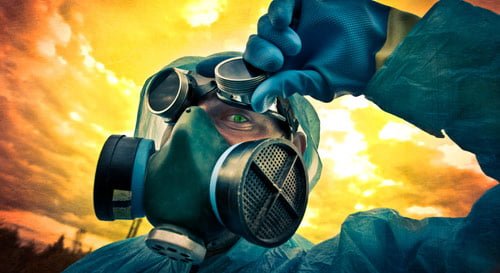 This article was written by Michael Snyder and originally published at his End of the American Dream blog.

Editor’s Comment: The gift that keeps on giving. An endless ocean of radioactive water, spilling into the Pacific Ocean at an astounding rate, every single day. The effects of this nuclear waste, particularly in the form of cesium 137 and strontium 90, are epidemic – they are being hidden by a refusal to report on the disaster, and by the diffuse global web of biology.

Though consumers of news, or groceries, don’t see it happening, these radioactive materials are curbing population numbers, and contamination is bio-accumulating up the food chain. A cow in California, for instance, may have only been exposed to a very minute amount of this radiation, but likely ate from an entire field of contaminated grass, and every tiny bit adds up. For humans, eating from many sources at the top of the food chain, this accumulates into greater exposure than direct measurements can account for.

There is no end in sight, and no one who has yet managed to grab back the public’s attention and get across how important this issue continues to be.

Radiation inside one of the damaged reactors at the Fukushima nuclear power facility has reached an “unimaginable” level according to experts. Because so much nuclear material from Fukushima escaped into the Pacific Ocean, there are many scientists that believe that it was the worst environmental disaster in human history, but most people in the general population seem to think that since the mainstream media really doesn’t talk about it anymore that everything must be under control. Unfortunately, that is not true at all. In fact, PBS reported just last year that “it is incorrect to say that Fukushima is under control when levels of radioactivity in the ocean indicate ongoing leaks“. And now we have just learned that the radiation level inside reactor 2 is so high that no human could possibly survive being exposed to it.

According to the Japan Times, the level of radiation inside the containment vessel of reactor 2 is now estimated to be “530 sieverts per hour”…

The radiation level in the containment vessel of reactor 2 at the crippled Fukushima No. 1 power plant has reached a maximum of 530 sieverts per hour, the highest since the triple core meltdown in March 2011, Tokyo Electric Power Co. Holdings Inc. said.

Tepco said on Thursday that the blazing radiation reading was taken near the entrance to the space just below the pressure vessel, which contains the reactor core.

The high figure indicates that some of the melted fuel that escaped the pressure vessel is nearby.

It is hard to find the words to convey how serious this is.

If you were exposed to a radiation level of just 10 sieverts per hour, that would mean almost certain death. So 530 sieverts per hour is simply off the charts. According to the Guardian, this recent measurement is being described by scientists as “unimaginable”…

The recent reading, described by some experts as “unimaginable”, is far higher than the previous record of 73 sieverts an hour in that part of the reactor.

And the really bad news is that there appears to be a 2 meter hole that was created by melted nuclear fuel “in the metal grating under the pressure vessel in the reactor’s primary containment vessel”. The following comes from Bloomberg…

New photographs show what may be melted nuclear fuel sitting under one of Japan’s wrecked Fukushima reactors, a potential milestone in the search and retrieval of the fuel almost six years after it was lost in one of the worst atomic disasters in history.

Tokyo Electric Power Co. Holdings Inc., Japan’s biggest utility, released images on Monday showing a grate under the Fukushima Dai-Ichi No. 2 reactor covered in black residue. The company, better known as Tepco, may send in a scorpion-like robot as soon as February to determine the temperature and radioactivity of the residue.

If that isn’t frightening enough, one Japanese news source is reporting that this melted nuclear fuel “has since come in contact with underground water flowing from the mountain side”…

The melted fuel has since come in contact with underground water flowing from the mountain side, generating radioactively contaminated water every day. In order to dismantle the reactor, it is necessary to take out the melted fuel, but high radiation levels inside the reactor had hampered work to locate the melted debris.

If this disaster was just limited to Japan, the entire northern hemisphere would not be at risk.

But that is not the case.

Most of the nuclear contamination from Fukushima ended up in the Pacific Ocean, and from there it was literally taken around the rest of the planet. The following was reported by PBS…

More than 80 percent of the radioactivity from the damaged reactors ended up in the Pacific — far more than reached the ocean from Chernobyl or Three Mile Island. Of this, a small fraction is currently on the seafloor — the rest was swept up by the Kuroshio current, a western Pacific version of the Gulf Stream, and carried out to sea where it mixed with (and was diluted by) the vast volume of the North Pacific.

We don’t know if there is a connection, but it is extremely interesting to note that fisheries up and down the west coast of the United States are failing because of a dramatic decrease in fish populations. Just check out the following excerpt from a story that was posted on January 18th…

In recent years, each of these fisheries experienced sudden and unexpected large decreases in fish stock biomass or loss of access due to unusual ocean and climate conditions. This decision enables fishing communities to seek disaster relief assistance from Congress.

Things are particularly bad up in Alaska, and biologists are “stumped” as to why this could be happening…

In 2016, the pink salmon harvests in Kodiak, Prince William Sounds, Chignik and lower Cook Inlet came in woefully under forecast and stumped biologists as to why.

The estimated value of Kodiak’s 2016 haul was $2.21 million, compared to a five-year average of $14.64 million, and in Prince William Sound the ex-vessel value was $6.6 million, far less that the $44 million five-year average. The total state harvest was the smallest since the late 1970s.

Although state biologists weren’t ready to declare a cause for the poor pink salmon performance, the Commerce Department press release attributed the disasters to “unusual ocean and climate conditions.”

Further south, it was being reported last month that millions of dead sardines are washing up on the shores of Chile.

I could go on and on with a lot more examples like this, but hopefully you get the point.

Something really strange is happening in the Pacific, and a lot of people believe that there is a link to Fukushima.

Not too long ago, I wrote about how the elite of Silicon Valley are “feverishly prepping“, but the truth is that all of us should be. If you need some tips on how to get started, you can find my prepping book right here. Our planet is becoming increasingly unstable, and the Fukushima nuclear disaster is just one piece of the puzzle.

But it is definitely a very important piece. The nuclear material from Fukushima is continuously entering the food chain, and once that nuclear material gets into our bodies it will slowly irradiate our organs for years to come. The following is an excerpt from an absolutely outstanding opinion piece by Helen Caldicott that was published in the Guardian…

Internal radiation, on the other hand, emanates from radioactive elements which enter the body by inhalation, ingestion, or skin absorption. Hazardous radionuclides such as iodine-131, caesium 137, and other isotopes currently being released in the sea and air around Fukushima bio-concentrate at each step of various food chains (for example into algae, crustaceans, small fish, bigger fish, then humans; or soil, grass, cow’s meat and milk, then humans). After they enter the body, these elements – called internal emitters – migrate to specific organs such as the thyroid, liver, bone, and brain, where they continuously irradiate small volumes of cells with high doses of alpha, beta and/or gamma radiation, and over many years, can induce uncontrolled cell replication – that is, cancer. Further, many of the nuclides remain radioactive in the environment for generations, and ultimately will cause increased incidences of cancer and genetic diseases over time.

Are you starting to understand the gravity of the situation?

Sadly, this crisis is going to be with us for a very, very long time.

According to Bloomberg, they are not even going to start removing melted nuclear fuel from these reactors until 2021, and it is being projected that the overall cleanup “may take as long as 40 years”…

Decommissioning the reactors will cost 8 trillion yen ($70.4 billion), according to an estimate in December from the Ministry of Economy, Trade and Industry. Removing the fuel is one of the most important steps in a cleanup that may take as long as 40 years.

The unprecedented nature of the Fukushima disaster means that Tepco is pinning its efforts on technology not yet invented to get the melted fuel out of the reactors.

The company aims to decide on a fuel removal procedure for the first reactor during the fiscal year ending March 2019, and to begin removing fuel in 2021.

A lot of people that end up dying as a result of this crisis may never even know that it was Fukushima that caused their deaths.

Personally, I am convinced that this is the greatest environmental crisis that humanity has ever experienced, and if the latest reading from reactor 2 is any indication, things just took a very serious turn for the worse.

This article was written by Michael Snyder and originally published at his End of the American Dream blog.

The Fukushima Endgame: The Radioactive Contamination of the Pacific Ocean