One month ago I wrote an article – Silent Obedient Consent – about our day in Cape May Lighthouse State Park and my disappointment in seeing so many perfectly healthy young people obediently wearing their face muzzles, as dictated by government bureaucrats,  on a bright crisp autumn day in a 244 acre state wild preserve. I found it sad that so many could be controlled so easily by so few.

Since my state has been on lockdown since our escape to Cape May and the weather has been cold, wet and snowy, we’ve been mostly cooped up in our home prison. The fear propaganda campaign has worked wonders, as our traditional Christmas Eve bash with 50 or so relatives and neighbors, was limited to six relatives. Monday, when I saw the temperature was going to 48 with bright sunshine, I insisted we needed to go to the 3,500 acre Valley Forge National Park to take a long walk.

We have lived eleven miles from Valley Forge Park for the last twenty-five years. I’m a student of history, so living this close to a national treasure, where a ragtag army of farmers showed tremendous fortitude and courage during the brutal deathly Winter of 1777-78, has been an endless source of enjoyment and learning for me, my wife and sons. The walking trails wind through beautiful rolling hills of trees, dotted with soldier quarters as they appeared 242 years ago. 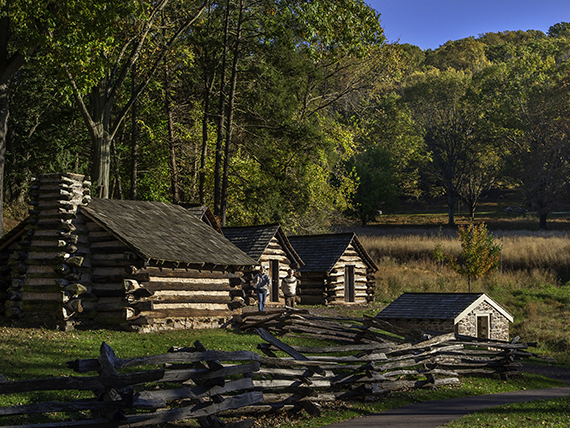 Many an afternoon did we hike up Mount Joy over the mountain to reach General Washington’s headquarters. The museum on the headquarters site is filled with interactive displays describing the tremendous sacrifices made by these men to keep a the hopes of a fledgling country alive. You can’t help but be inspired by the bravery and courage of these men. They left their families and were willing to die for a cause that seemed unreachable. They were willing to sacrifice their lives to gain freedom from tyrannical monarch mandates.

The park rangers have always been friendly and helpful. We signed our two youngest sons up for a program where we took them there every Saturday and they were trained as recruits in the Continental Army with pretend muskets. It was fun for them and they learned about an important event in the founding of our country. Our three boys were full of energy and we would do the five mile trek around the park every time. They would roller blade, scooter or walk, but we always made two stops. One was the battery of cannons, where they would imagine blasting some redcoats.

The other was a huge climbing tree which we assumed was around in 1778 when General Baron von Steuben was drilling his Continental Army recruits, instilling discipline and teaching them tactics. Picturing the past heroic actions of true patriots is easy to do at Valley Forge. When we could get them down from the branches we would set the timer on our camera and take a picture for posterity.

All of my memories of time spent at Valley Forge Park were positive, until this past Monday. Once again, I was aghast at what I witnessed on a sunny brisk winter day. At first I was surprised at the huge number of cars in the parking lot. Many people had the same idea, as indoor dining has been banned by Generalissimo Baron von Wolf for the last month. Our level of enthusiasm for our enjoyable trek through this national treasure of a park waned immediately as we witnessed hundreds upon hundreds of young people, families, bikers, and joggers fully muzzled, as demanded by covid czar Dick/Rachel Levine and dictator in chief – Tom Wolf.

We were going to enjoy our unmasked walk no matter how many compliant sheep we had to pass. Lone bikers, near no one, were masked. Lone joggers were masked. One jogger would pull up her mask when she passed someone and then pull it down after passing. Little kids were masked. Mothers, fathers, teens on dates, and young guys were all masked.

I couldn’t help but think how government school indoctrination had worked wonders on these obedient serfs. Have years of helicopter parenting created such a pathetic generation of infant like rule followers? Are they so willfully ignorant they can’t do the basic research to realize masks don’t work, based on CDC studies and the actual case rates in states and cities with mandatory masking and lockdowns?

Based on my observations, at least 60% of these people, out getting exercise and fresh air (not too fresh with a filthy diaper on their faces), were obeying their tyrannical politicians and bureaucrats, or entrapped in fear by a flu with a 99.7% survival rate. We didn’t have the slightest hesitancy in walking next to or passing others resisters (aka anti-maskers, aka granny killers) who chose to live on the edge by breathing fresh air. I never have a problem choosing not to be one of the crowd and not following the lemmings.

The most embarrassing aspect of our afternoon was when fully masked sheeple would take a wide berth into the grass when they saw we were un-muzzled. They treated us like plague carrying super spreaders. This happened at least a half dozen times. When we passed two young fully masked parents pushing a stroller with an infant sucking on his pacifier, I jokingly said to my wife that I should patent a face mask with a built in pacifier. Too late. They already sell them on the internet. We truly must be living in some dystopian Twilight Zone episode.

If it was in my power, anyone who willingly wears a mask in the fresh air should be required to wear this mask. It would represent the infantilization of Americans during this era of idiocracy.

We have a nation of infants sucking on pacifiers while trapped in their cribs by sociopathic parents/politicians. Infants are incapable of critical thought, must be fed to survive, and diapered at all times. Sounds like the majority of adult Americans today, except the diaper is on the other end.

As we passed maskers by the dozens on the walking path, I found myself wondering if any of these people appreciated the irony of the cowardice and dishonor shown to those brave, honorable men who spent a brutal winter battling bitter cold, snow, starvation, typhus, small pox, dysentery, and the threat of attack from the most powerful army on the planet only thirty miles away in Philadelphia. These men faced death every moment of their existence. Meanwhile, our current army of Valley Forge maskers cower from the phantom menace of a highly non-lethal flu bug.

There are hundreds of statues scattered throughout the park honoring the patriots who made the ultimate sacrifice to create a new nation of self-reliant, strong, independent minded, citizens who didn’t require coddling by a massive overbearing Federal government. They just wanted to be left alone to work their farms, raise their families, and live as free men. Statues to honor our current day “heroes” would look like this.

When assessing the state of our nation, it is always a prudent choice to seek out the wisdom of our founding father who led the troops at Valley Forge – George Washington. I think the quote below captures the essence of what has been happening in this country over the last ten months.

The downward spiral crisis in this country is reflected in the apparent trivial submission of a vast swath of the populace to a psychotic belief a thin piece of cloth will save them from a moderately annoying flu that won’t kill 99.9% of Americans. This is a turning point in the history of our country. And not one which will go down in glory, taught in history books as a story of courageousness, fortitude, bravery and common sense.

“The turning points of lives are not the great moments. The real crises are often concealed in occurrences so trivial in appearance that they pass unobserved.”― George Washington

If General George Washington was alive today, he would be praying for the end of this societal mass delusion and for leaders who were not cunning, ambitious, unprincipled and intent on destroying everything he fought for during those times that tried men’s souls. The subversion of power by a cadre of extremely wealthy globalist traitors has succeeded beyond their expectations.

The future of our country hangs in the balance, just as it did in the Winter of 1777/78. The question is whether we remain sunshine patriots wearing masks as demanded by the monarchy or will we stand now, shed our masks and fight the tyranny engulfing this nation. The choice is ours.

“However political parties may now and then answer popular ends, they are likely in the course of time and things, to become potent engines, by which cunning, ambitious, and unprincipled men will be enabled to subvert the power of the people and to usurp for themselves the reins of government, destroying afterwards the very engines which have lifted them to unjust dominion.” ― George Washington

—————————————————–
The corrupt establishment will do anything to suppress sites like the Burning Platform from revealing the truth. The corporate media does this by demonetizing sites like mine by blackballing the site from advertising revenue. If you get value from this site, please keep it running with a donation. [Jim Quinn – PO Box 1520 Kulpsville, PA 19443] or Paypal
Emigrate While You Still Can!
THE BURNING PLATFORM

Polish Pastor Not Backing Down, AGAIN Expels “Gestapo” Police From His Church (Video)

One of the Greatest Economic Blunders in History