The US State Secretary John Kerry traveled on Wednesday May 18th to the presidential palace in Egypt.  In news “The US secretary of state has held talks with the Egyptian president in Cario on the country’s political situation and peace proposals for the region, including the Israeli-Palestinian conflict.” Translating from the political doublespeak into English: The US and Israel tried to push Egypt to drop its support for the upcoming UN Palestine resolution. Israel has even tried to bribe the Egyptian leaders, by announcing during the meeting that “Israel may forgive half of Egypt’s $1.7b gas fine for a gas pipeline explosion in el-Arish, Egypt in July, 2012.” And this is very important: “Kerry: Egypt key regional partner by Jerusalem Post Israel News – ‎18 hours ago‎ Kerry’s brief visit fueled speculation that a behind the- scenes US-Egyptian-led peace process with Israel and other regional partners was in the works, which would circumvent the highly publicized French initiative to end the Israeli-Palestinian conflict. ”

Apparently, the US and Israel didn’t get what they want from Egypt, that’s why the passenger airliner went down in a suspected “terror attack.”

The US is getting ready to start bombing Egypt for “violations of human rights.” That’s why it was reported right before a plane crash:  “Can Egypt be forced to improve prison conditions? Aljazeera.com – ‎20 hours ago‎  Prisons and police stations across Egypt are bursting at the seams, Human Rights Watch says. Opposition supporters, together with journalists who speak out against the Egyptian government and its policies, continue to be rounded up by security forces.”

The US and Israel cannot let Egypt to have its first nuclear power plant, either.

However,  Russian government anticipated this turn of events.

Overview of the Relationships between Russia and Egypt (Infographics)

Mar 18, 2016 – The deliveries of Russia’s advanced President-S onboard defense systems (ODS) to Egypt will begin in “coming days…”

Apr 6, 2016 – KAZAN (Sputnik) – Russia and Egypt in April-May will sign a contract for the supply of an additional batch of the advanced President-S onboard …

May 13, 2015 – A senior Israeli intelligence official who tracks the regional arms balance said on Wednesday that Egypt was buying Russia’s advanced S-300 …

In addition, on Sunday, May 15th it was reported that France now tops the list of countries to have signed ‎military supply agreements with Egypt during the term of President Abdel-‎Fattah El-Sisi. 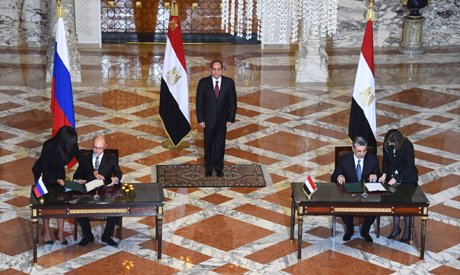 French intelligence warned of IS attacks before missing EgyptAir Flight. Has their been a major breach of security?http://www.dailymail.co.uk/news/article-3598319/French-intelligence-warned-country-clearly-targeted-ISIS-Paris-flight-Egypt.html …

The head of France’s internal intelligence agency warned France was being ‘clearly targeted’ by ISIS a week before Flight MS804 took off. Patrick Calvar gave a warning on May 10.

As with #Russia & #Italy, #Egypt and its relations with #France are targeted, i don’t believe in coincidences.

See our posts Waiting for Yalta-2 and Germany SITREP researcher C. talks to Scott about the efforts to squeeze the US and NATO from Europe, the Middle east and Asia.

How Turkey Supports the Jihadists