Update 3: Avenatti’s most famous client revealed in a statement published Monday afternoon that she was “saddened, not shocked” by news of Avenatti’s indictment, adding that she fired him after discovering that he had dealt with her in an “extremely dishonest” way. 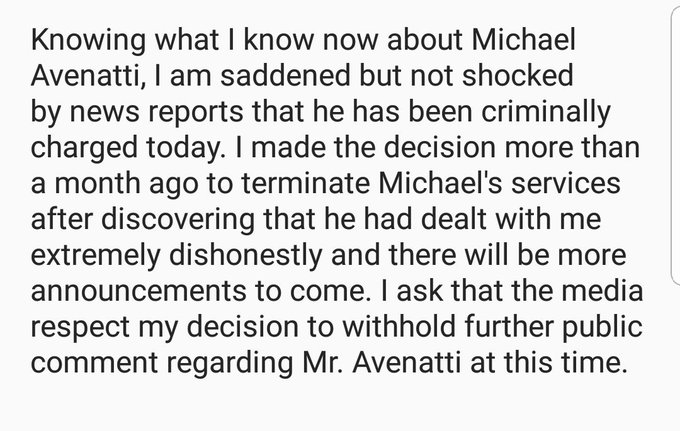 My statement regarding my former attorney Mr. Avenatti..

Update 2: This is just getting more surreal. A second set of charges allege he embezzled a client’s money in order to pay his own expenses and debts — as well as those of his coffee business and law firm — and also defrauded a bank by using phony tax returns to obtain millions of dollars in loans.

Avenatti also allegedly defrauded a bank in Mississippi by submitting to the lender false tax returns in order to obtain three loans totaling $4.1 million for his law firm and coffee business in 2014. According to the affidavit, Avenatti obtained the loans by submitting fabricated individual income tax returns (Forms 1040) for 2011, 2012, and 2013, reporting substantial income even though he had never filed any such returns with the Internal Revenue Service.

Instead of the millions of dollars he claimed to have paid in taxes, Avenatti still owed the IRS $850,438 in unpaid personal income tax plus interest and penalties for the tax years 2009 and 2010, court papers state. The affidavit also alleges that, as part of his loan applications, Avenatti also submitted a fictitious partnership tax return for his law firm.

Avenatti reportedly negotiated a $1.6 million settlement on behalf of a client, then turned around and gave the client a “bogus settlement agreement” with a fake date and fake amount. He used the stolen money to pay “expenses” for his coffee business.

That office said “Avenatti misappropriated his client’s settlement money and used it to pay expenses for his coffee business, Global Baristas US LLC, which operated Tully’s Coffee stores in California and Washington state, as well as for his own expenses.”

“When the fake March 2018 deadline passed and the client asked where the money was, Avenatti continued to conceal that the payment had already been received, court documents said,” according to prosecutors.

“A lawyer has a basic duty not to steal from his client,” said U.S. Attorney for Los Angeles Nick Hanna.

“Mr. Avenatti is facing serious criminal charges alleging he misappropriated client trust funds for his personal use and he defrauded a bank by submitting phony tax returns in order to obtain millions of dollars in loans.”

It’s been a bad few days for the #resistance.

There’s a TIMELINE of events relating to the Michael Avenatti case, laid out.
This all happened within the past WEEK.

Update 1: Just minutes after lawyer Michael Avenatti tweeted his tease of a press conference tomorrow claiming Nike is involved in a college basketball scandal, Bloomberg reports that Avenatti was just charged by federal prosecutors in New York with attempting to extort millions of dollars out of Nike Inc. by threatening to release damaging information about the company, which did not meet his demands.

Avenatti is alleged to have told Nike that he would cancel a press conference critical of sports apparel company only if it paid an unidentified client $1.5 million, and hired him and another California lawyer to conduct an internal investigation for $15 million to $25 million.

Avenatti is accused of wire fraud and bank fraud. He was arrested Monday, prosecutors said.

” SDNY is charging Michael Avenatti for “attempting to extract more than $20M in payments from a publicly traded company by threatening to use his ability to garner publicity to inflict substantial financial & reputational harm on the company if his demands were not met.””

According to the complaint filed in federal court, Avenatti told Nike attorneys by phone last week if his demands were not met, “I’ll go take ten billion dollars off your client’s market cap … I’m not f*cking around.”

“I’m not fucking around with this, and I’m not continuing to play games. . . . You guys know enough now to know you’ve got a serious problem. And it’s worth more in exposure to me to just blow the lid on this thing. A few million dollars doesn’t move the needle for me. I’m just being really frank with you. So if that’s what, if that’s what’s being contemplated, then let’s just say it was good to meet you, and we’re done. And I’ll proceed with my press conference tomorrow . . . .

I’m not fucking around with this thing anymore. So if you guys think that you know, we’re gonna negotiate a million five, and you’re gonna hire us to do an internal investigation, but it’s gonna be capped at 3 or 5 or 7 million dollars, like let’s just be done. And I’ll go and I’ll go take ten billion dollars off your client’s market cap. But I’m not fucking around.”

And Nike shares are rebounding…

SDNY is having a press conference on the Avenatti charges at 2:30pm.

As March Madness hits its stride, former Stormy Daniels’ lawyer Michael Avenatti has found another outlet for his unique legal capabilities. In a tweet, Avenatti warned:

“Tmrw at 11 am ET, we will be holding a press conference to disclose a major high school/college basketball scandal perpetrated by @Nike that we have uncovered. This criminal conduct reaches the highest levels of Nike and involves some of the biggest names in college basketball.”

Tmrw at 11 am ET, we will be holding a press conference to disclose a major high school/college basketball scandal perpetrated by @Nike that we have uncovered. This criminal conduct reaches the highest levels of Nike and involves some of the biggest names in college basketball.

10.4K people are talking about this