Update: President Trump on Monday called for the focus to be shifted to Hillary Clinton after his former campaign chairman Paul Manafort turned himself into the FBI after being indicted on 12 counts, including conspiracy against the United States.”Sorry, but this is years ago, before Paul Manafort was part of the Trump campaign. But why aren’t Crooked Hillary & the Dems the focus?????” Trump tweeted. “Also, there is NO COLLUSION!”

The statement alludes to the fact that Manafort’s alleged misdeeds took place before he joined the Trump campaign.

Update: Messages of support from Republican Congressmen for the Mueller probe are beginning to trickle in…

Update: In an apparent attempt to pre-empt criticism of the Mueller probe from President Trump, Nancy Pelosi and Chuck Schumer have both released statements defending the investigation…

INBOX: @NancyPelosi on the Mueller indictments:

Update: The Justice Department has released the Manafort/Gates indictment. The indictment contains 12 counts total, and the big one appears to be conspiracy against the US. They are also facing charges of tax fraud, money laundering and giving false statements.

The two men are expected to appear in court at 1:30 am ET.

In total more than $75,000,000 flowed through Manafort’s offshore accounts, according to the Mueller indictment. Manafort allegedly laundered more than $18 million which was used by him to buy property, goods and services in the US, income that he concealed from the US Treasury, the DOJ and others. Gates was instrumental in helping Manafort move the money form his illict foreign accounts into the US, and eventually transferred more than $3 million to accounts he controlled.

According to the indictment, between at least 2006 and 2015, Gates and Manafort acted as unregistered agents of the Government of Ukraine, the Party of Regions (a Ukrainian political party whose leader Victor Yanukovych was President from 2010 to 2014), Yanukovych, and the Opposition Bloc (a successor to the Party of Regions that formed in 2014 when Yanukovych fled to Russia). The two men generated tens of millions of dollars in income as a result of their Ukraine work. In order to hide Ukraine payments from United States authorities, from approximately 2006 through at least 2016, they laundered the money through scores of United States and foreign corporations, partnerships, and bank accounts.

Manafort and Gates used money from their Cyprus accounts to finance lavish lifestyles. Manafort spent more than half a million dollars of it on clothes from stores in Beverly Hills, and $20,000 on housekeeping. Gates spent the money on his mortgage, personal expenses, tuition payments and  an interior decorator for his Virginia home. 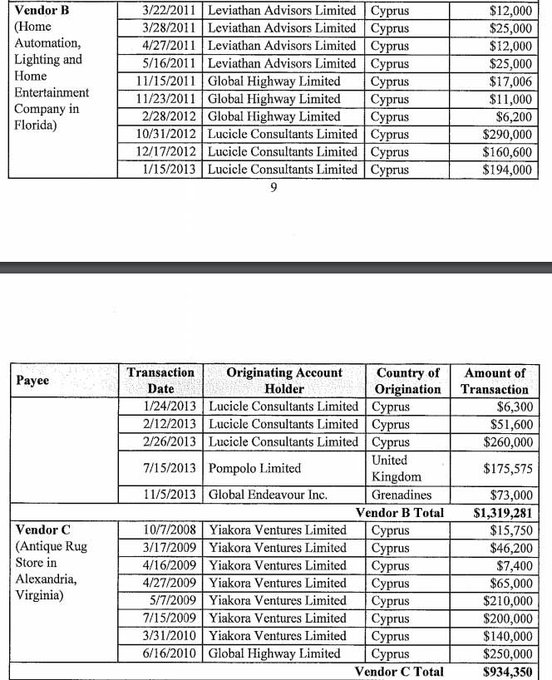 Read the indictment in its entirety below, whose highlights are below, courtesy of Bloomberg:

Update: Manafort has been hit with several charges, including tax fraud, WSJ reported. He’s expected in federal court in Washington later Monday, a person familiar with the matter said. Meanwhile, Rick Gates is also reportedly turning himself in.

Update: CBS News confirms a photojournalist has captured images of Manafort leaving his home this morning with his lawyer.

Surprise, surprise. The New York Times is reporting that the first indictment in Special Counsel Robert Mueller’s probe into possible collusion between the Trump campaign and Russia has been unsealed.

And the target is none other than Paul Manafort, who briefly served as chief executive of the Trump campaign last summer before reports about his work for Ukraine’s former leader Viktor Yanukovich forced him out. Manafort has reportedly been asked to surrender by the FBI, sparing him an embarassing perp walk.

The charges against the pair weren’t immediately clear. But they do represent an escalation in the probe that has loomed over President Trump’s first year in office.

Gates is a longtime protege and junior partner at Manafort’s firm. His involvment in the probe was revealed in the spring. His name appeared in documents linked to a Cypriot firm Manafort set up to receive payments from Eastern European politicians like Yanukovich, who purportedly paid Manafort with money looted from the Ukraine state.

Manafort had been udner investigaiton for violations of federal tax law, money laundering and whether he failed to properly disclose his foreign lobbying.

As we’ve noted, since these charges mostly stem from Manafort’s work before he became involved with the campaign, they leave ample room for Trump to declare victory.

As far as impact to the market – so far nothing – and as KBW’s Brian Gardner explains, none is expected, despite expectations for much sound and fury and told-you-so’s from the left.

However, Gardner notes that any unsealing of indictments may dominate the week’s entire news cycle, drowning out coverage of tax legislation and monetary policy.

Now, we watch for the administration’s response.

Casualty Lists from the Kavanaugh Battle

Behind the Scenes in Swamptopia