So much for NATO-alliance members working for the common good.

In a move that has angered the U.S. for obvious reason, Turkey’s state-run news agency Anadolu Agency has leaked the precise locations of U.S. bases in northern Syria. The move – which exposes the exact locations of American soldiers on the front lines in the war-torn nation – has sent the ongoing feud between the two NATO allies to new lows. As Bloomberg details, in reports published in both Turkish and English on Tuesday, Anadolu provided detailed information about 10 U.S. bases in northern Syria, including troop counts and a map of the U.S. force presence in the Turkish version. 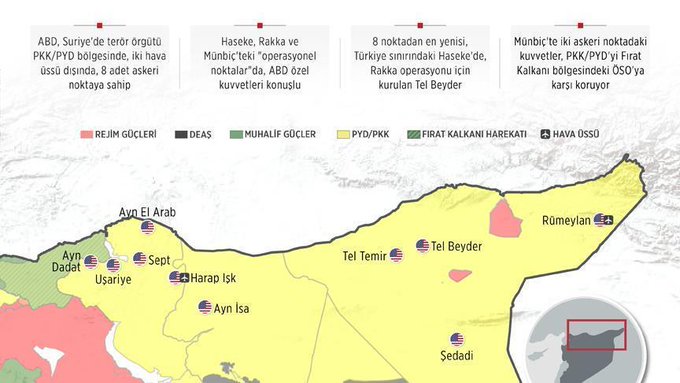 Without citing specific sources, the state-run news agency unveiled the ten US outposts located in areas controlled by “terrorist” Kurdish militias in the provinces of Aleppo, Hasakah and Raqqa. The reports said that the military outposts are “usually hidden for security reasons, making it hard to be detected.” It said they were located “in the terrorist PKK/PYD-held Syrian territories,” a reference to Kurdish groups that Turkey’s government considers terrorist organizations.

While locations of two of the bases, in Rmeilan district (in Hasakah province) and Harab Isk village (near Kobani, in Aleppo province), had already been widely publicized, the others had been mentioned only in outside reports, or were completely unknown. Anadolu’s story also provided systematic and detailed information about troop numbers, equipment, and US operational procedures at the outposts.

Needless to say, the Pentagon was furious.

According to the Daily Beast, Washington was so incensed that it even tried to prevent US media from reprinting the story, after it had already appeared in the Turkish media.

“The discussion of specific troop numbers and locations would provide sensitive tactical information to the enemy which could endanger Coalition and partner forces,” Colonel Joe Scrocca, director of public affairs for Operation Inherent Resolve, reportedly wrote to the New York-based Daily Beast, which was the only major US outlet to pick up the story by Wednesday morning.

“Publishing this type of information would be professionally irresponsible and we respectively request that you refrain from disseminating any information that would put Coalition lives in jeopardy,” Scrocca added.

It is no secret that over the past few years Turkey and the U.S. have been at odds over the U.S. backing of Kurdish fighters in Syria who are affiliated with separatist movements inside Turkey. The Turkish government probably leaked U.S. troop locations to Anadolu as retaliation, according to Aaron Stein, a fellow at the Atlantic Council in Washington.

“The U.S. takes force protection seriously, obviously,” Stein said by email on Wednesday. “The Turkish government knows this, and still decided to leak the locations of U.S. bases in Syria. Hard not to see this as a F-you.”

Indeed, on Monday, Turkey’s National Security Council proclaimed that the Syrian-based YPD is the “same organization” as the separatist PKK that operates inside the country, and which Turkey has branded as terrorist. Turkish officials said that weapons freely flow between the two groups, and last month accused Washington of arming “terrorists,” saying that “some allies” apply “double standards.”

Meanwhile, the Pentagon said it had conveyed its concern to the Turkish government.

“While we cannot independently verify the sources that contributed to this story, we would be very concerned if officials from a NATO ally would purposefully endanger our forces by releasing sensitive information,” Major Adrian J.T. Rankine-Galloway, a Defense Department spokesman, said in an emailed statement. “The release of sensitive military information exposes Coalition forces to unnecessary risk and has the potential to disrupt ongoing operations to defeat ISIS.”

According to Bloomberg, Levent Tok, an Anadolu Agency reporter on the story, said the information about U.S. troop positions wasn’t leaked. “The story was based on field work by Anadolu’s Syria reporters and some of the information on bases had been broadcast on social media by Kurdish fighters”, he told Bloomberg on Wednesday. “The U.S. should have thought about this before it cooperated with a terrorist organization,” he said.

The Anadolu report claims that the US operates several types of facilities in the Kurdish-controlled territories. Some are “field-type military points” which are “usually hidden for security reasons, making it hard to be detected.” The most prominent of these is Rmeilan, established in the Al-Hasakah province in October 2015. It has an airfield through which cargo planes deliver weapons to the fighters – one of the two major arms routes into the country, along with a land route from Iraq, according to the news agency. Another is Harab Isk, a helicopter base set up near Kobani in March 2016.

Apart from the more traditional facilities, the US-led coalition “uses some other places which are hard to be detected like residential areas, PKK/YPD camps, easily transformed factories.” Eight of the facilities are staffed with officers responsible “for airstrikes and artillery shelling, military consultants, training officers, [and] operational planning officers.”

“The equipment in the military points includes artillery batteries with high maneuverability, multi-barrel rocket launchers, various mobile equipment for intelligence and armored vehicles such as ‘Stryker’ for general patrols and security,” the report adds.

The incident was the latest to strain relations between Turkey and a major NATO ally.

Last week, a senior Turkish official told Bloomberg that Turkey had agreed to purchase a missile defense system from Russia, a move that could jeopardize Turkey’s relations with the Western security bloc. Germany is in the process of withdrawing from Turkey’s most important NATO base, Incirlik, after Turkey repeatedly refused to allow German lawmakers to visit troops there.