ONE OF THE biggest news stories this week is a cover-up, a deception manufactured by hyper-partisan ideologues trying to distract from a burning, uncomfortable truth. That truth—the one those biased muckrakers won’t tell you about—has implications for national security. It shows the corruption and self-interest eating away at the United State’s most hallowed institutions. And those trying to cover up the dirty truth should be not only discredited but reviled.

We are, of course, talking about President Trump giving Russian envoys classified information. We are also, of course, talking about murdered Democratic National Committee staffer Seth Rich. Because this particular story is about both: they way they land in our newsfeeds and the way the conversations around them start at opposing ends of the political spectrum but wind up mired in the same self-assured groupthink and paranoia.

If you trust The Washington Post and other mainstream media organizations, this week has been about President Trump’s ill-considered conversation with the Russian foreign minister and ambassador, and the diplomatic fallout and impeachment debates and special counsel appointmentsthat followed. And maybe, if you lean a bit left, you heard about a far-right conspiracy theory claiming that Hillary Clinton ordered a hit on a DNC staffer—a pathetic attempt to distract from Trump’s real and mounting ties to Russia.

If you get your news from a far-right outlet, though—one like Breitbart, InfoWars, or The Drudge Report—then all week you’ve been hearing about Seth Rich getting murdered for passing DNC emails to WikiLeaks. That Trump-Russia stuff? That’s just a desperate ploy to distract you from the criminal deep state operating out of the Democratic Party and doing everything it can to smear POTUS.

One of these things is not like the other. And by now you probably know filter bubbles are to blame for country-wide double vision over the past year. But what happened this week with the Seth Rich business isn’t simple. It’s a funhouse mirror of a story, distorting fear and conjecture into a grotesque simulation of truth.

Let’s track how this story evolved in each newsiverse.

The facts as we know them are few. Last July, 27 year old Seth Rich was killed near his home in Washington, DC; no one knows who did it. Not long after Rich’s murder, WikiLeaks published nearly 20,000 Democratic National Committee emails obtained by Russian hackers. The next month, WikiLeaks offered a $20,000 reward for information regarding Rich’s killer, fueling a percolating conspiracy theory that Rich might have been involved in the DNC leak. Many, including Rich’s family, discount the WikiLeaks reward as an effort by founder Julian Assange to sabotage the DNC. DC police still believe the murder to be a robbery gone wrong.

Fast-forward to now. This week, multiple outlets reported that Trump revealed highly classified intelligence in a meeting last week with the Russian foreign minister and ambassador (who figures prominently in the Trump administration’s Russia woes). The pro-Trump media, however, did not; it either remained silent, assailed the story as “fake news,” or buried coverage of the scandal below the digital fold. At the same time, a private investigator and Fox News contributor named Rod Wheeler told a Fox News affiliate that he had found evidence Rich had been in touch with WikiLeaks prior to his death. Wheeler has since denied having any personal knowledge of such evidence, and claims to have been fed the information by the reporter interviewing him.

Despite the recanting, Wheeler’s alleged bombshell was enough to reignite stories about the supposed Seth Rich coverup. Believers cited an email exchange published by WikiLeaks in which Hillary Clinton’s campaign chair John Podesta expresses support for “making an example of” any suspected DNC leaker. The connection was obvious to conspiracists: Rich’s death means he was the real DNC leaker and that Podesta had put out a hit on him. While even Sean Hannity picked up on that idea, core right-wing outlets like InfoWars tried to use the Rich conspiracy to prove that the Trump intel fiasco was a desperate suppression attempt by the mainstream media. 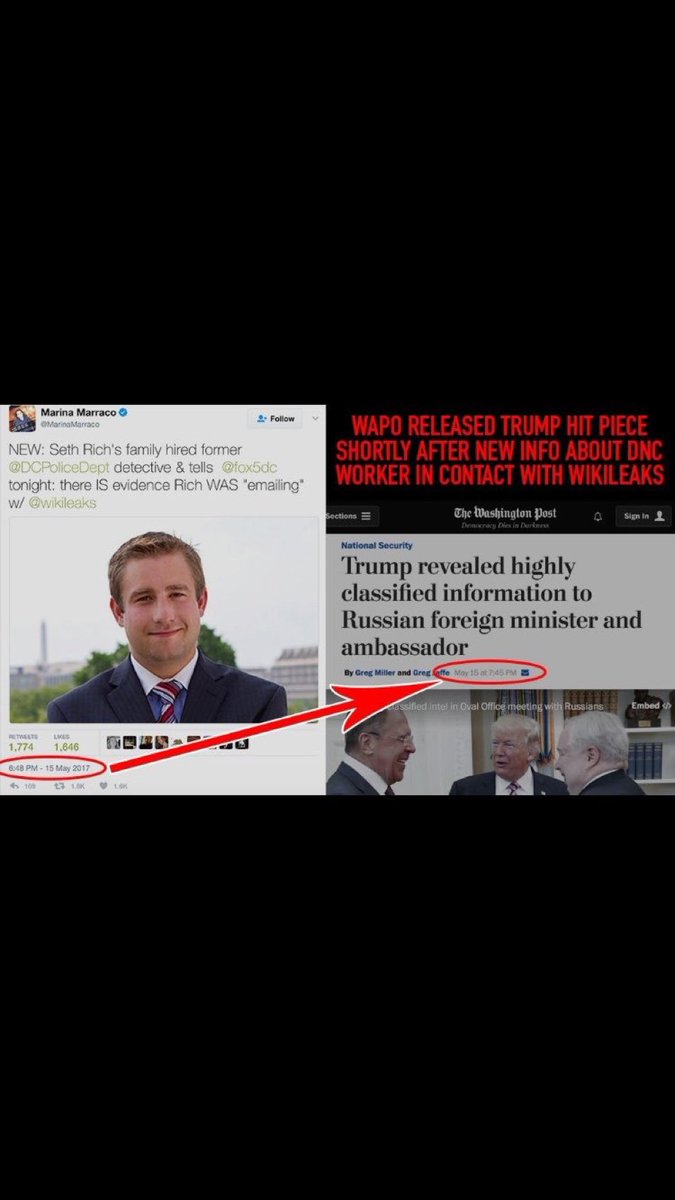 Did the Washington Post publish its fake news Russia hit piece to drown out the bombshell #SethRich story?

Readers ate this up. In a social media storm reminiscent of #PizzaGate, people tweeted the Rich conspiracy theory into a rebuttable issue—making it visible enough that the mainstream media reiterated the actual facts surrounding the story, often as told by Rich’s bereaved parents. But why should InfoWars have all the paranoid fun? Hyper-partisan left-leaning outlets jumped in as well, alleging that their right-wing counterparts/enemies were using the Rich theory to distract everyone else from Trump’s collusion with Russia. Much like the White House itself, the entire thing became one big finger-pointy mess.

Claiming “fake news” doesn’t change the fact that The Washington Post and The New York Times have covered the chaotic Trump administration masterfully, with deep sourcing and factual reporting that’s effected actual change. The far right and the center only cover about half the ideological continuum of the media, however, and there’s blame enough for the far left as well. Just as the Democratic Party isn’t full of murderers and child-trafficking pizza-eaters, a majority-Republican Congress doesn’t mean everyone’s getting their paycheck in rubles. But as publications speak to ever-shrinking bubbles of the internet—and encourage those readerships to distrust every other voice in the chorus—it will become easier and easier to obscure real corruption.

Has World War 3 Begun? The entry of superpowers almost certain in the ongoing Azerbaijan-Armenia war

FOUNDATION AND EMPIRE: IS DONALD TRUMP THE MULE?