“In a time of deceit telling the truth is a revolutionary act.” ― George Orwell

Every time the BLS puts out their monthly propaganda report on the wonderful state of the U.S. jobs market and states with a straight face the unemployment rate is a measly 5.5%, their corporate mouthpieces in the mainstream cheerleader media regurgitate the fake numbers and urge you to buy stocks. The millionaire talking heads on CNBC and the corrupt bought off politicians in D.C. make broad sweeping declarations about economic recovery, strong job growth, GDP advancement, record highs in the stock market, and soaring consumer confidence.

The people living in the real world know otherwise, but they want to believe the “experts” and “leaders”. This dichotomy between reality and what they are being told is causing a tremendous amount of mental stress. This cognitive dissonance of attempting to reconcile what they are experiencing in their every day existence and the propaganda being peddled at them on a daily basis from big media, big bankers, corporate titans, and captured politicians pulling the strings and running the show, is causing psychological discomfort. Most people want their lives to get better, so to reduce their cognitive dissonance they choose to believe the government and media reports about economic improvement.

It is only a small minority who want to know the unvarnished truth. They are drawn to alternative media websites, which the the captured corporate media refers to as doom sites. These critical thinking individuals understand the facts. The Deep State propaganda has no impact on these people because they have no cognitive dissonance. They know things are far worse than what is reported by the government and their media whores. Knowing the truth and seeing how the majority remain willfully ignorant results in rising anger among truth seekers. Huxley was right.

“You shall know the truth and the truth shall make you mad.” ― Aldous Huxley

When the BLS reports their monthly unemployment BS showing a 5.5% unemployment rate and Obama holds a press conference to pat himself on the back for the 10 million jobs he has created since 2009, the critical thinking truth seekers focus on the big lies in the numbers. The 10 million jobs added has been surpassed by the 13 million people who supposedly willingly left the workforce. The 148 million employed Americans is only 2 million more than were employed in 2008, but the government wants you to believe the unemployment rate is the same as it was in 2008 despite the fact the working age population has grown by 16 million people.

The truth is the labor participation rate has fallen dramatically since 2008 and now sits at a 38 year low of 62.7%. The rate consistently remained between 66% and 67% from 1988 through 2008. There are 250 million working age Americans and only 148 million Americans working and the powers that be expect you to believe only 8.5 million of the 102 million non-working Americans are actually unemployed. When the critical thinking doom websites point out the record low participation rate, the immediate response from the Wall Street propaganda machine is Baby Boomers retiring. Their co-conspirators in misdirection and misinformation in the media unquestioningly perpetuate this lie without an iota of journalistic credibility. 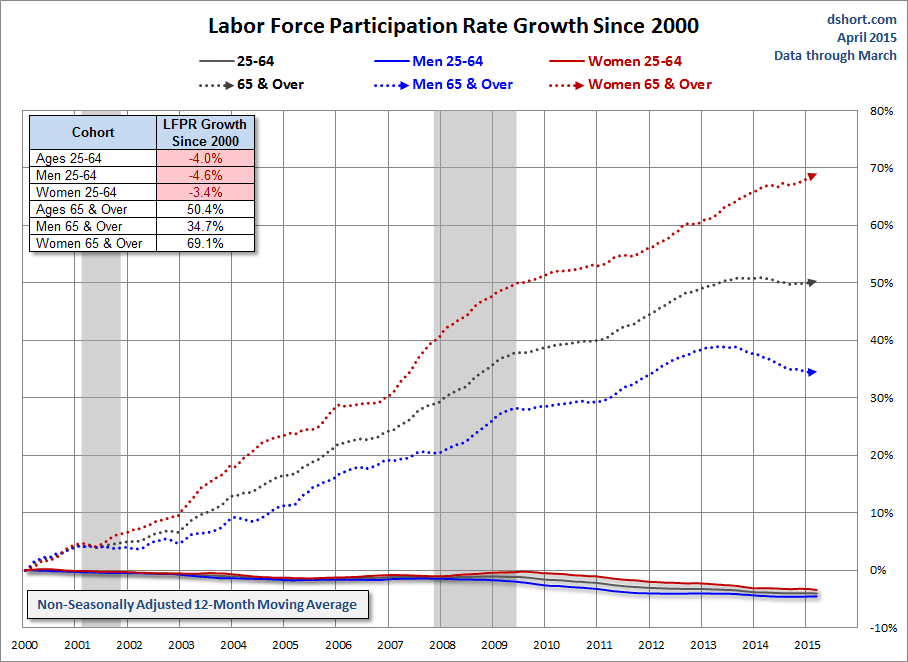 The blatant perpetuation of the big lie began in earnest after the 2008 Wall Street created financial crisis. The number of jobs for those 54 years old and younger is still 1.2 million below 2007, while the number of jobs for those 55 and older is up by 6 million. Those over 55 working today stands at 33.1 million, an all-time high. This figure has doubled since 2000. The Boomer dream of a long luxurious retirement, living off their interest income, lying on a beach and drinking pina coladas has devolved into being forced to work as Wal-Mart greeters and McDonalds counter help until they die. Retirement isn’t an option after two Federal Reserve created bubbles burst, six years of zero interest rates, and three simultaneous bubbles on the verge of bursting.

The falsity of the jobs recovery meme is unequivocally proven by the fact real median household income is still 4.5% lower than it was at the 2001 and 2008 peaks. And this is using the ridiculously understated CPI figure. Using a true inflation rate would show real median household income to be 20% below 2000 levels. The last time I checked, workers live in households. How could the unemployment rate plunge from 10% in 2009 to 5.5% today with real median household income falling? Maybe the 21% decrease in manufacturing jobs since 2000 and the proliferation of low paying part-time service jobs, along with Federal Reserve created inflation, have resulted in the death of the middle class. Real people living in the real world have seen their standard of living steadily decline for the last 25 years. And they know it, deep inside, despite the propaganda echoing from their boob tubes.

There is a reason retail sales continue to stagnate. There is a reason credit card debt continues to decline. There is a reason you don’t hear your friends, family or neighbors talk about the improving economy. If you don’t hob nob with the ruling elite at Manhattan cocktail parties or summer at the Hamptons, you know the truth. Your real wages are lower than they were in 1989. The expenses you incur to live your everyday life like food, rent, transportation, health insurance, and tuition are rising at 5% to 10%, not the 1.7% reported by your government keepers. You own little or no financial stocks, so the record stock market highs have no impact on your financial well being. You may have money in a savings account, money market or CDs. Eight years ago you could earn 5%. Today you earn .15%, thanks to Bernanke, Yellen and their Federal Reserve cohorts. But at least you still get to pay the Wall Street banks 15% on your credit card balance.

The only way to relieve the tremendous mental stress caused by the conflict between what you know you are experiencing in your everyday life and what you are being told by bankers, politicians, government apparatchiks, and the corporate media, is to accept the truth and free yourself from the tyranny of the Deep State. Propaganda is a powerful tool in the hands of rich powerful psychopathic men bent on accumulating wealth, power and control over the bourgeois. Secrecy, censorship, data manipulation, and media messaging to mislead have worked for decades. Very little in the way of coercive techniques have been required, as the Bernays method of conscious and intelligent manipulation of the organized habits and opinions of the masses has worked wonderfully to hoodwink and bamboozle the average person.

The mood of society in general continues to darken. War drums are beating around the globe. The imperial American Empire is fraying at the edges and using military force, intrigue, surveillance, and secrecy in an attempt to retain its power domestically and internationally. The truth is being suppressed, but the internet and proliferation of websites revealing the lies of those in power is slowly opening the eyes of more and more people whose cognitive dissonance has caused them too much discomfort. The Deep State is worried. Their wealth, power and control are in danger. The attempts to control the internet, the un-Constitutional surveillance of citizens, and the militarization of police forces across the land are a futile attempt to control us. But the truth will set us free. As Robert Heinlein describes, no amount of force can control a man who mind is free.

“Secrecy is the keystone to all tyranny. Not force, but secrecy and censorship. When any government or church for that matter, undertakes to say to its subjects, “This you may not read, this you must not know,” the end result is tyranny and oppression, no matter how holy the motives. Mighty little force is needed to control a man who has been hoodwinked in this fashion; contrariwise, no amount of force can control a free man, whose mind is free. No, not the rack nor the atomic bomb, not anything. You can’t conquer a free man; the most you can do is kill him.” – Robert A. Heinlein

It won’t take a majority to prevail. If we continue to set brush fires of truth, freedom and reason among the increasingly disillusioned masses, a tipping point will be reached and a revolution of truth will sweep across the land. So, if you have the opportunity to speak the truth to someone today….

Contributed by James Quinn of The Burning Platform.

James Quinn is a senior director of strategic planning for a major university. James has held financial positions with a retailer, homebuilder and university in his 25-year career. Those positions included treasurer, controller, and head of strategic planning. He is married with three boys and is writing these articles because he cares about their future. He earned a BS in accounting from Drexel University and an MBA from Villanova University. He is a certified public accountant and a certified cash manager. VisitThe Burning Platform for news, commentary and humor.

How Does the Gates Foundation Spend its Money to Feed the World?