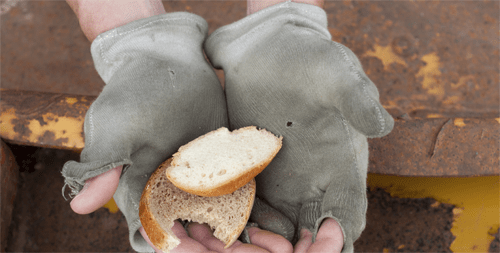 Editor’s Comment: In the great logic of governments, the Venezuelan dictator has essentially ordered an end to hunger by making a rule against food shortage. But no rule, no matter how strictly enforced, will work if there is no supply for the food. The shortages of imported food staples is the source problem here with the bread, not the conduct of the bakers, and yet they are facing new, and somewhat bizarre, implements as Maduro takes on the “economic war” against his country – paid for with the price of his people’s hunger.

This remains a desperate situation that is only getting worse, and remains a textbook reminder of why socialism, once the wealth has been stripped or used up, is ultimately doomed to fail.

As Venezuelan “Bread War” Escalates, Maduro Warns Bakers “You Will Pay, I Swear”

With its people resorting to eating flamingoes, the Venezuelan government has decided to find yet another thing to blame for the collapse of the socialist utopia – the bakers!

As The BBC reports, the Venezuelan government says it will expropriate bakeries which fail to abide by new government regulations aimed at tackling bread shortages.

In a growing row between the government and bakers, officials said that bakeries could face fines if people had to queue to get their bread. Severe shortages of basic goods mean that Venezuelans often have to queue for hours to buy essential items.

The government says the shortages are caused by an “economic war”.

Venezuela does not produce wheat and relies on imports bought in by the government which it then sends to mills where it is ground and then distributed.

The government blames bakers for the bread shortages, accusing them of using the flour allocated to them to bake pastries rather than simple baguette-style bread in order to maximise their profits.

Croissants and other sweet baked goods are more expensive than baguettes and French-style breads, as the prices for the latter are controlled by the socialist government.

And the rules will be strictly enforced…

On Sunday, President Nicolas Maduro announced that inspectors would be sent to 709 bakeries in the capital, Caracas, to ensure they were complying with the new rules.

He said that those “speculators who hide the bread from the people will face the weight of the law”.

“They’re going to pay, I swear. Those responsible for the bread war are going to pay and they better not complain that it was a political persecution,” he added.

Vice-President Tareck El Aissami warned that “bakeries which do not follow [the rules] will be occupied by the government”.

As The Miami Herald notes, two bakeries were already seized for 90 days for breaking a number of rules, including selling overpriced bread.

The notion that bread could become an issue in Venezuela is yet another indictment of a socialist economic system gone bust.

The Economics of “Free Stuff”