Tom Petty has died at the age of 66, his manager Tony Dimitriades has confirmed. Petty was initially rushed to the hospital on Sunday night after going into cardiac arrest. He died peacefully Monday night at 8:40 p.m. Pacific “surrounded by family, his bandmates and friends.” Preemptive reports circulated on Monday evening that Petty had passed away; the reports were based on information from the LAPD, which police later retracted. One of the most popular rock stars of all time, Petty recorded iconic songs like “Breakdown,” “Don’t Do Me Like That”, “American Girl,” and more.

Petty was born in Gainesville, Fla. in 1950. In 1970, he formed the band Mudcrutch, which included musicians Mike Campbell and Benmont Trench, with whom he would continue to perform throughout the rest of his career. Following the release of the band’s 1975 single “Depot Street,” Petty embarked on a solo career. He formed a backing band called the Heartbreakers, and their self-titled debut album was released in 1976. It featured the single “Breakdown,” as well as Petty’s signature song, “American Girl.” Their breakthrough third album, Damn the Torpedoes, arrived in 1979. It was certified triple-platinum and featured several hit singles, including “Don’t Do Me Like That,” “Here Comes My Girl,” and “Refugee.”

In the ’80s, Petty was a part of the supergroup the Traveling Wilburys, along with Bob Dylan, George Harrison, Roy Orbison, and Jeff Lynne. Petty continued his partnership with Lynne on his first solo album, Full Moon Fever, released in 1989. It featured hits like “Free Fallin’,’’ “Running Down a Dream,” and “I Won’t Back Down,” which was later covered by Johnny Cash. Petty’s next solo album, 1994’s Wildflowers, was produced by Rick Rubin.

During the 2000s, Petty maintained his prolificacy, releasing the solo record Highway Companion, as well as albums with the Heartbreakers. In 2007, he reunited his old band Mudcrutch, who recorded two new albums together, with their most recent arriving in 2016. Earlier this year, Tom Petty and the Heartbreakers embarked on tour to celebrate the band’s 40th anniversary. A reissue of Wildflowers has also been in the works. He was inducted into the Rock and Roll Hall of Fame in 2002. 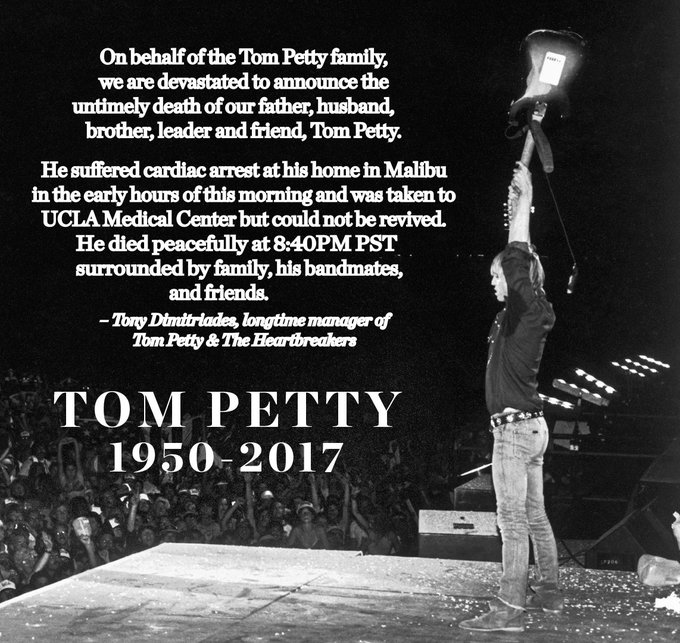