by Tyler Durden
Even before the coronavirus pandemic ground the US economy to a halt, the US brick and mortar retail sector was facing an apocalypse of epic proportions with dozens of retailers filing for bankruptcy in recent years as Amazon stole everyone’s market share…

Since June 2015, retail chains have accumulated more than $45 billion in aggregate chapter 11 liabilities in connection with over 80 bankruptcy filings: 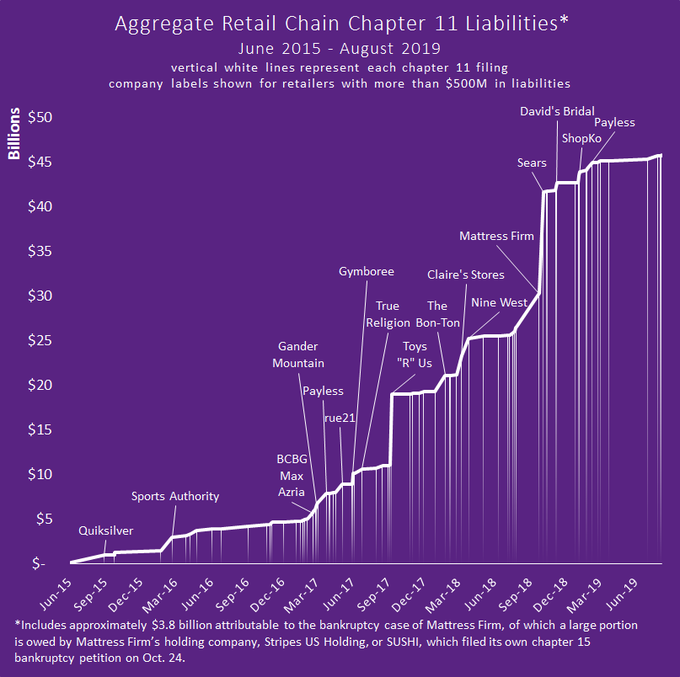 … resulting in tens of thousands of stores across the nation shuttering.

So what has taken place in the retail sector in just the past few weeks is straight out of the the 9th circle of hell.

With cash flows dwindling, and their survival in question every day, the total collapse in revenue has meant that firms such as (recently reorganized) Mattress Firm and Subway are among some of the major U.S. retail and restaurant chains telling landlords they will withhold or slash rent in the coming months after closing stores to slow the coronavirus, Bloomberg reports citing sources.

Aware that one way (out of bankruptcy) or another (in bankruptcy), they will end up renegtiating their leases, retail chains are proactively calling for rent reductions through lease amendments and other measures starting in April.

Mattress Firm, with about 2,400 stores, sent landlords a letter last week saying it would cut rent in exchange for longer leases and offering two options to do so. This week, it sent a more urgent note revoking its earlier offer.

“The decline in revenue and forced store closures across the nation are more drastic, compressed and immediate than we originally anticipated,” the company wrote in a letter reviewed by Bloomberg. “Our need is now more severe,” the firm said, invoking the virus as a force majeure event that “will prevent or prohibit us” from paying rent.

After being contacted by Bloomberg, Mattress Firm confirmed that it has requested a temporary suspension of rent.

“We appreciate our landlord partners, and the responses have been encouraging so far,” Randy Carlin, chief real estate officer for Mattress Firm, said in a statement. “We will continue to do everything we can to maintain business continuity and to ensure there are jobs available for our people to return to when this crisis ends.”

Subway Restaurants, which has more than 20,000 U.S. locations, sent out a letter to landlords last week saying that it might cut or postpone rental payments due to the virus, according a person with knowledge of the situation. The Real Deal, a real estate trade publication, reported on the communication earlier.

Virtually every other US retailer has also told their landlords the same, and if not, they will soon.

These moves, as Bloomberg notes, mark the next phase in virus fallout: what happens to billions in rent owed for businesses that have been closed? The stakes are high. Retail has a slew of big chains in turnaround mode. And if they do withhold payments, there would be a ripple effect. Landlords can’t afford to stop collecting rent for long, with many property owners sitting on loads of debt.

Worse, if landlords refuse to budge, it’s unclear how this mutually assured destruction will conclude in anyone’s favor. The fiscal stimulus packages being considered don’t directly address rents. But the Federal Reserve’s actions may give banks the leeway to defer mortgage payments, allowing property owners to delay rent. Some retailers may also declare a “force majeure,” a contract clause that covers highly unusual events, although whether or not landlords or banks accept this is a different question.

“The court system is just going to get flooded with a million of these disputes between tenants and landlords,” said Vince Tibone, an analyst at Green Street Advisors. “If the government doesn’t step in in any form or fashion, it could get ugly. They need to respond quickly.”

In short: this will be the biggest in court mess ever, and whether it involves in court bankruptcy or not, will not matter one bit, as there is simply no money.

The good news is that some landlords have recognized they need to help smaller tenants. For example, California’s Irvine Company Retail Properties, is allowing rent to be deferred for 90 days and then paid back with no interest over a year starting in January. The firm confirmed the practice without further comment. Bedrock, a Detroit developer, said it will waive rent and other fees for three months for its smaller retail and restaurant tenants.

However, for many other landlords, who themselves are highly levered, forbearing on rent is simply not an auction as the lack of even a few months of liquidity could mean the different between life and death. Indeed, it may also be the tipping point for America’s malls, many of which should have shuttered long ago yet subsisted as zombie creatures kept alive by cheap money. Well, no more, and the result is a massive victory for all those who had the “Big Short 2.0” trade on their books: also known as the great mall armageddon trade via CMBX Series 6, and which we discussed yesterday, has made its long-suffering fans very right.

But even if retailers succeed in getting a rent reprieve for a month or two, in the grand scheme of things it will hardly make much of a difference. The reason: in just the past 10 days, more than 47,000 chain stores across the US shut their doors – temporarily, or so they hope – as retailers took extreme measures to help slow the spread of the coronavirus pandemic according to Bloomberg data. At least 90 nationwide retailers, ranging from Macy’s to GameStop to Michael Kors have temporarily gone dark.

While most have pledged to remain closed for at least two weeks, many if not all will likely have to stay closed for much longer, because as we showed earlier, the US is very early on the coronavirus curve, and many weeks have to pass before the peak is hit.

It has been an unprecedented moment for shopping in America, a country that contains more retail selling space than any other.

“In the space of a week, the retail landscape has changed from being fairly normalized to being absolutely disrupted beyond what we’ve ever seen before outside of the Second World War,” Neil Saunders, managing director of GlobalData Retail, said.

After Apple, Nike and Urban Outfitters were among the first to announce store closures on Saturday, March 14, the store shuttering pace quickened over the remainder of the week. Then shopping centers closed by the hundreds, with developers like Simon Property Group and Westfield, owned by Unibail-Rodamco-Westfield, locking up their entire U.S. mall networks. By Monday, March 23, at least 47,000 chain stores were shut. Most told customers that goods would be available online, but even store websites weren’t immune. Victoria’s Secret, T.J. Maxx and Marshalls decided to cease operations in their distribution centers and shut down their e-commerce businesses.

There is some hope that when the virus is contained, shopping will get back to normal but in all likelihood the shopping experience in America may never be the same. People could still lean towards social distancing and be fearful of crowds, said Simeon Siegel, an analyst at BMO Capital Markets.“Even when companies are given the all-clear, we don’t yet know when consumers are going to embrace that,” he said. On the other hand, should the lock down duration extend, many of the stores listed above will simply liquidate and never be heard from again.

2017 Is Going To Be The Worst Retail Apocalypse In U.S. History – More Than 300 Retailers Have Already Filed For Bankruptcy