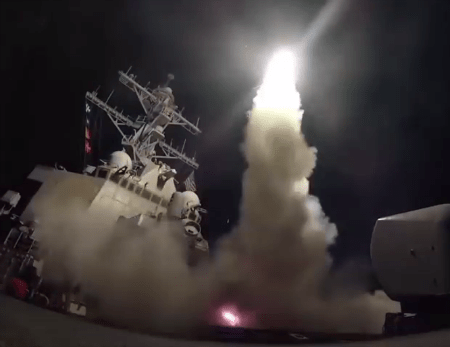 There’s a whole sordid history to America’s idiotic return to war again – and again – even though each and every episode, each and every war has wound up being a pile of lies.

But there’s no time to go into that here, and it’s besides the point. If the truth were simply sitting there, on a platter, it would still remain unknown.

So disorienting is the multi-pronged, two-sided propaganda regime that controls our thinking, and thus our lives, that Americans seem incapable of learning from their past mistakes – making them regressive and defenseless animals that are being easily manipulated and contained by the larger collective organism that has pushed for war as a means of metabolism and growth.

Nothing good can come out of what happened in Syria. Its consequences may take time to play out, or not.

And no one is currently in a position to stop or even stand up to any of it.

10 Reasons Trump’s Attack on Syria Was Idiotic and Based on Lies — James Perloff:

Trump bent immediately to the will of the deep state. Like a twig in the wind.

It’s time to be honest about that. The people never had a champion in the ring.

Let us talk no more of “democracy,” or of “voting”. Of course, that is hard to accept and acknowledge, because it is so devastating to the delusions that hold individuals together from day to day.

Many people may not even be capable of holding the thought or notion that they might oppose or stop it. Most Americans are now literally numb to the actions of its own government, the lives it is destroying and the lies it is working for.

The candidates and the creatures of the state who have willingly lied and deceived the people while looking them in the eye (and pretending to have good reasons) are recklessly and wantonly jeopardizing the world in a way that that hasn’t been seen since the cold war.

“None are more hopelessly enslaved than those who falsely believe they are free.” – Johann Wolfgang von Goethe

Is World War 3 Coming? 18 Preppers Discuss Effects, Shortages, and How to Get Ready

Prepare For The Coming War: “It’s Going To Obliterate The Global Financial System… Our Economy Will Not Survive”

Global War Approaches: North Korea Warns: “If A Single Bullet Is Fired We WILL Nuke The United States”

Survive ANY Disaster: A Step-By-Step Guide

Watch: 5 Signs We’re Going to War: “A Plan Implemented By Bush, Continued Under Obama, And Kicked Up A Notch By Our New President”

America The Divided: Everyone Knows We Have Problems But There Is Very Little Agreement On Solutions

Mass Manipulation – How it Works