Via The Burning Platform

“Capitalism without financial failure is not capitalism at all, but a kind of socialism for the rich.” –James Grant, Grant’s Interest Rate Observer

The Federal Reserve issued their fourth quarter Report on Household Debt and Credit last week to the sounds of silence in the mainstream media. There were minor press releases issued by the “professional” financial journalists regurgitating the Federal Reserve’s storyline. Actual analysis, connecting the dots, describing how the massive issuance of student loan and auto loan debt has produced a fake economic recovery, and how the accelerating default rates in auto loans and student loans will produce the next subprime debt implosion, were nowhere to be seen on CNBC, Bloomberg, the WSJ, or any other status quo propaganda media outlet. Their job is not to analyze or seek truth. Their job is to keep their government patrons and Wall Street advertisers happy, while keeping the masses sedated, misinformed, and pliable.

Luckily, the government hasn’t gained complete control over the internet yet, so dozens of truth telling blogs have done a phenomenal job zeroing in on the surge in defaults. The data in the report tells a multitude of tales conflicting with the “official story” sold to the public. The austerity storyline, economic recovery storyline, housing recovery storyline, and strong auto market storyline are all revealed to be fraudulent by the data in the report. Total household debt grew by $117 billion in the fourth quarter and $306 billion for the all of 2014. Non-housing debt in the 4th quarter of 2008, just as the last subprime debt created financial implosion began, was $2.71 trillion. After six years of supposed consumer austerity, total non-housing debt stands at a record $3.15 trillion. This is after hundreds of billions of the $2.71 trillion were written off and foisted upon the backs of taxpayers, by the Wall Street banks and their puppets at the Federal Reserve. 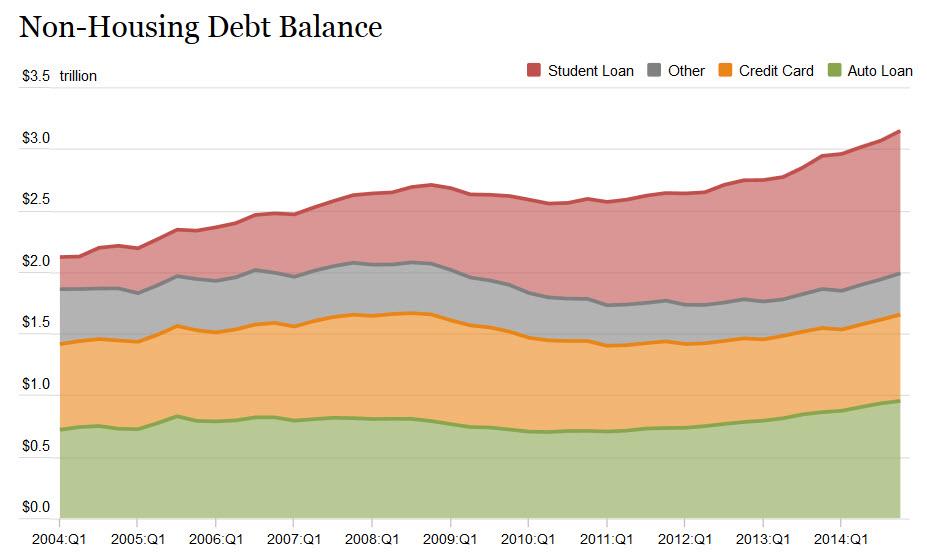 The corporate media talking heads cheer every increase in consumer debt as proof of economic recovery. In reality every increase in consumer debt is just another step towards another far worse economic breakdown. And the reason is simple. Real median household income is still below 1989 levels. The average American family hasn’t seen their income go up in 25 years. What they did see was their chains of debt get unbearably heavy. Non-housing consumer debt (credit card, auto, student loan, other) was $800 billion in 1989.

The 300% increase in consumer debt, while incomes stagnated, has created a zombie nation of debt slaves. And this doesn’t even take into account the quadrupling of mortgage debt from $2.2 trillion in 1989 to $8.7 trillion today. This isn’t Twelve Years a Slave; it’s Debt Slaves for Eternity. And who benefits? The Wall Street bankers, .1% oligarchs, and corporate fascists pulling the levers of government and society benefit. An economic and jobs recovery for working Americans is nowhere to be seen in the chart below.

Total debt on the balance sheet of American consumers (formerly known as citizens) now tops $11.8 trillion, up from the $11.1 trillion trough in 2013. The peak was “achieved” in a frenzy of $0 down McMansion buying, Lexus leasing, and Home Equity ATM extraction in 2008, when the total reached $12.7 trillion. The $1.6 trillion decline from peak insanity had nothing to do with austerity or Americans reigning in their debt financed lifestyles.

The Wall Street banks took the $700 billion of taxpayer funded TARP, sold their worthless mortgage paper to the Fed, suckled on the Fed’s QE and ZIRP, and wrote off the $1.6 trillion. Wall Street didn’t miss a beat, while Main Street got treated like skeet during a shooting competition. Every solution proposed and implemented since September 2008 had the sole purpose of benefitting the criminals on Wall Street who perpetrated the largest financial heist in world history. The slogan should have been Bankers Saving Bankers Since 1913.

The average American benefited in no way from the government/banker bailout. Their wages have deteriorated, their daily living expenses have risen, Obamacare has resulted in higher healthcare premiums, higher co-pays, more part-time jobs, less full-time jobs, and less healthcare choices for the working class, while Wall Street generates billions in risk free profits, bankers and corporate executives reap massive million dollar bonuses, and the .1% parties like its 1999. Rising wealth inequality has been systematically programmed into our economic system by bankers and their bought off puppet politicians in Washington D.C. – Corporate fascism at its finest.

The lack of real economic recovery for the average American has been purposely masked through the issuance of $500 billion of subprime student loan debt and $200 billion of auto loan debt (much of it subprime) since 2010 by the Federal government and their co-conspirators on Wall Street.

The issuance of debt by the government to people not financially able to repay that debt, in order to generate economic activity and boost GDP is nothing more than fraudulent inducement using taxpayer funds. Debt financed purchases is not wealth. Debt financed consumption does not boost the wealth of the nation. If adding debt produced economic advancement, why has the number of Americans on food stamps escalated from 33 million in 2009 to 46 million today during a five year economic recovery? Why have 10 million Americans left the labor force since 2009, pushing the labor participation rate to 30 year lows, during a jobs recovery?

Why have social benefits distributed by the Federal government surged by $2.5 trillion since 2012, reaching a record high of 20.8% of real disposable income? It resides 33% above 2007 levels and still above levels during the depths of the recession in 2009. But at least the stock market hits record highs on a daily basis, creating joy in NYC penthouse suites and Hamptons ocean front estates. American dream for the .1% achieved.

When you actually dig into the 31 page Federal Reserve produced report, anyone with a few functioning brain cells (this eliminates all CNBC bimbos, shills, and cheerleaders), can see our current economic paradigm is far from normal and an economic recovery has not materialized. Record stock market prices and corporate profits have not trickled down to Main Street. Janet, don’t piss down my back and tell me it’s raining (credit to Fletcher in Outlaw Josey Wales). The mainstream media spin fails to mention that $706 billion of consumer debt is currently delinquent. That is 6% of all consumer debt.

Could the Wall Street banks withstand that level of losses with their highly leveraged insolvent balance sheets? The number of foreclosures and consumer bankruptcies rose in the fourth quarter versus the third quarter. Does this happen during an economic recovery? Donghoon Lee, research officer at the Federal Reserve Bank of New York, may be looking for a new job soon. When a Federal Reserve lackey actually admits to being worried, you know things are about to get very bad very fast.

“Although we’ve seen an overall improvement in delinquency rates since the Great Recession, the increasing trend in student loan balances and delinquencies is concerning. Student loan delinquencies and repayment problems appear to be reducing borrowers’ ability to form their own households.”

And he didn’t even mention the increase in auto loan delinquencies which will eventually morph into a landslide of bad debt write-offs, repossessions, and Wall Street bankers demanding another bailout. The pure data in the Fed report doesn’t tell the true story. The $306 billion increase in outstanding debt only represents a 2.7% annual increase. And even though mortgage debt increased by $121 billion, it was on a base of $8.17 trillion. That is a miniscule 1.5% increase. A critical thinking individual might wonder how national home prices could rise by 25% since the beginning of 2012, while mortgage debt outstanding has fallen by $220 billion over this same time frame, and mortgage originations are hovering at 1997 levels.

It couldn’t have been the Wall Street/Fed/Treasury Dept. withhold foreclosures from the market, sell to hedge funds and convert to rental units, and screw the first time home buyer scheme to super charge Wall Street profits and artificially boost home prices. Could it? New home sales prices and new home sales were tightly correlated from 1990 through 2006. Then the bottom fell out in 2006 and new homes sales crashed. Nine years later new home sales still linger at 1991 recession levels. New home sales are 65% lower than they were in 2005, but median prices are 20% higher. This is utterly ridiculous.

If prices had fallen to the $100,000 to $150,000 level, based on the historical correlation, first time home buyers would be buying hand over foot. But the Federal Reserve, their Wall Street owners, connected hedge funds, and the Federal government has created an artificial price bubble with 0% interest rates and trillions of QE heroin. The 1% can still afford to buy overpriced McMansions, but the young are left saddled with student loan debt, low paying service jobs, and no chance at ever owning a home.

The chart that puts this economic recovery in perspective is their 90+ days delinquent by loan type. If you haven’t made a payment in 90 days or more, the odds are you aren’t going to pay. The Fed and the ever positive corporate media, who rely on advertising revenue from Wall Street, the auto industry, and the government, go to any lengths to spin awful data into gold. Their current storyline is to compare delinquency levels to the levels in 2009 at the height of the worst recession since the 1930s. Mortgage delinquencies have fallen from 8.9% in 2010 to 3.2% today (amazing what writing off $1 trillion of bad mortgages can achieve), but they are three times higher than the 1% average before the financial meltdown. Is that a return to normalcy? Home equity lines of credit had delinquency rates of 0.2% prior to the 2008 meltdown. Today they sit at 3.2%, only sixteen times higher than before the crisis. Is that a return to normalcy? Do these facts scream “housing recovery”? The outlier on the chart is credit card delinquencies. The normal, pre-crisis level hovered between 9% and 10%. Banks can handle that level when they are charging 18% interest while borrowing at .25% interest. During the Wall Street created recession, delinquencies spiked to 13.7%, but after writing off about $150 billion of bad debt and closing 100 million credit card accounts, delinquencies miraculously began to plunge. Delinquencies have plunged to 7.3% as credit card debt still sits $170 billion below the 2008 peak. This is a reflection of Americans depending on their credit cards to survive their everyday existence.

With stagnant real wages and household income 7% below 2008 levels, the average family is using their credit cards to pay for food, energy, clothing, utilities, taxes, and medical expenses. They are making the minimum payments and staying current on their payment obligations because their credit cards are the only thing keeping them from having to live in a cardboard box. A Bankrate.com survey this week revealed 37% of Americans have credit card debt that equals or is greater than their emergency savings, leaving them “teetering on the edge of financial disaster.” Greg McBride, Bankrate.com’s chief financial analyst sums up the situation:

Who doesn’t have an unplanned expense multiple times in a year? A major car repair, appliance repair, hot water heater failure, or a medical issue is utterly predictable and most people are unprepared to financially deal with them. As many people found in 2009, credit card lines can be reduced in the blink of an eye by the Wall Street banks. This potential for financial disaster is why Americans are doing everything they can to stay current on their credit card payments. That brings us to the Federal Reserve/Federal Government created mal-investment subprime boom 2.0, which is in the early stages of going bust.

I’ll address the Subprime bust 2.0 in Part Two of this article.

The More Corrupt the State, the More Numerous the Laws

Flaunting Wealth: Are We About To Reach America’s “Let Them Eat Cake” Moment?