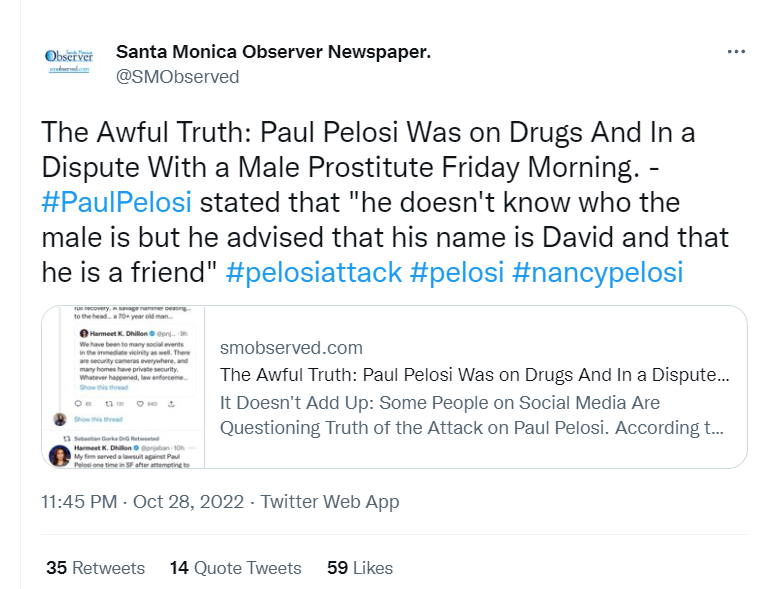 All the narratives spun by the Party of Chaos are falling apart now, but this final fiasco, a mere week before the midterm election, is a humdinger with a cherry-on-top.

It’s been several days since San Francisco police interrupted a hammer fight between Paul Pelosi — husband of House Speaker Nancy — and his “friend… David,” in the Pelosis’ Pacific Heights home, and apparently the cops have not asked David DePape why he was there in the first place. Odd, a little bit. Is it possible that a whole chain of authorities from the SFPD clear up into the top of the US government and its Democratic Party sidekicks don’t want you to know what actually happened?

So far, not much in this cockamamie story adds up. Quite a bit is known now about the attacker, David DePape. He was a colorful character on the scene in radical Berkeley across the bay, a “nudist activist” and BLM supporter. He’d lived there and had a child with one Oxane “Gypsy” Taub, a fellow nude activist and whack-job, who has spent time in prison for child abduction. That partnership ended seven years ago and DePape has been homeless on and off since then. Acquaintances and Berkeley neighbors describe him as not mentally healthy, saying he exhibits psychotic delusions and is sometimes incoherent.

So far, police have not disclosed how DePape journeyed from Berkeley to Pacific Heights at 2:00 o’clock in the morning, about fourteen miles. Did he walk from Berkeley across the Bay Bridge and then halfway across town? Mr. DePape is apparently also known to the police as a gay hustler, that is, a person who sells sex for money. Unless I’m mistaken, the San Francisco Police Department (SFPD) has a detective department — experienced men and women who go around the city seeking clues, evidence, and testimony in order to make sense of perplexing crimes — and then solve them! Shall we assume they are on-the-job?

Now, Paul Pelosi, 82, who made a $300-million fortune running a car service (also shrewd investments in real estate and the stock market), has been in quite a bit of trouble this year. On May 28, 2022, he was arrested for Driving Under the Influence (DUI) in Napa (near a vineyard estate he owns with Nancy) when his 2021 Porsche crashed into a 2014 Jeep driven by one “John Doe” (as the police identified him). KGO-TV, ABC’s affiliate in the San Francisco area, said that there was a second person in the Porsche with Pelosi at the time of the accident. He has never been identified.

In August, Mr. Pelosi was sentenced to five days in jail, a fine of roughly $7,000, a three-month drinking-and-driving course, eight hours of public service, and having an “interlock” device installed on his car that would require him to blow into an alcohol sensor before the engine can ignite. By any chance, were the Napa Police or the County Court contacted in the matter at some point by the US Capitol Police or the FBI? We may never know.

If David DePape didn’t walk fourteen miles from Berkeley to Pacific Heights, or take a cab (expensive), how did he get there? Here’s a theory: he rode the BART subway from Berkeley to the Church Street and Mission station in the city, a five-minute walk to the Castro Valley, San Francisco’s fabled gay district. Sometime before 2:00 a.m. closing time, he met up in a bar there with Paul Pelosi, who drove DePape to the Pelosi house in a car not equipped with an interlock device. That is to say, David DePape was let into the house by Mr. Pelosi.

The police and the news media have theorized that DePape broke into the place by smashing a glass door in back. Uh-huh…. Ask yourself: would there not be an alarm system at least on all the ground floor windows and doors in the house? Would there not be security cameras on the back side of the house — the side that burglars might prefer, if they could get over the wall? Would the Speaker of the House, with a discretionary budget on top of a $300-million fortune, and in a time of epic political rancor, not have a team of security guards in place at her private home?

Initial news media chatter had both DePape and Paul Pelosi dressed in their underwear, struggling over a hammer which turned out to belong to Mr. Pelosi. Not until the police entered the house did DePape wrest the hammer from Mr. Pelosi and commence to brain him with it. What does the arrest report actually say about the two men’s state-of-dress? It is not public information. How and why were the police just watching until DePape assaulted Mr. Pelosi — who was hospitalized afterward and had surgery on his cracked skull? (Uh, how did a blow that literally broke his skull not kill the elderly Mr. Pelosi?)

The news media initially suggested that somebody — a third person on the scene — opened the door to let the police in. Now they are saying no such person was there. Was the front door unlocked? (Weird, considering the general threat level for a public figure of Nancy P’s stature.) Or, did police break the glass door in the rear of the house to get in? (However, photos of the door show the glass being broken from the inside and shards spread over the outside.) Odd, also, that such a wealthy and powerful couple would not have hard-to-smash security glass on such a door. (It’s easy to buy.) Odd, too, that there was not one human security guard on the premises. The house had security cameras all over the exterior and interior. No mention in the news media or from the SFPD of what might have been recorded by these cameras at the time of the incident.

My assessment of this bizarre episode as follows: Paul Pelosi was out drinking late the night of the incident. He hooked up with David DePape, a hustler he might have been previously acquainted with, and took him back to the house in Pacific Heights. Something went wrong with the transaction. Considering that DePape exhibited psychotic behavior at times, it might have taken little to set him off. All the authorities involved are playing it coy, but failing to construct a narrative that adds up.

The Democratic Party has attempted to convert the sordid incident into a political talking point, painting DePape as a MAGA crazy. That spin apparently failed almost instantly. Their next effort will be to shove the story down the memory hole — the news media will just not report on any developments. Meanwhile, Nancy Pelosi put out a statement that her family is “heartbroken” over the incident. Yes, of course. I’m sure. Nobody knew about Paul Pelosi’s peccadillos. Boo-hoo. Cry me a river, you degenerate jade. Don’t suppose the truth about this will be successfully suppressed, like Hunter B;’s laptop. And so, the career of Nancy Pelosi comes to an ignominious end in the November 8 election, with a cherry-on-top of personal humiliation. She deserves every bit of it.

This blog is sponsored this week by Vaulted, an online mobile web app for investing in allocated and deliverable physical gold. To learn more visit:Kunstler.com/vaulted

Pelosi: “Civilization Itself is at Stake” if Trump Wins Re-Election

Bottom Line: Democrats are Afraid of You