President Trump blasted the “out of control” dishonesty of the mainstream media during a Thursday press conference, accusing reporters of distorting facts to help special interests.

This is the most amazing presidential press conference I’ve ever seen.

Pres. Trump literally addressing the press corps right now on how to make their ratings “better.”

At the start of a nearly two-hour announcement, which was meant to introduce the new pick for Secretary of Labor, Alexander Acosta and promptly turned into a fiery, at times rambling back and forth with members of the press more reminiscent of his campaign speeches, which covered leaks to the media, Russian relations, immigration policy, the final fate of ObamaCare and a multitude of other subjects, President Trump rejected portrayals of chaos in his administration and claimed “incredible” progress in his first four weeks in office, lashing out at media organizations he said “will not tell you the truth.”

Trump opened the speech with what Bloomberg dubbed a 25-minute tirade in which he pointed to the stock market’s performance as evidence of his early accomplishments and said news organizations work “for the special interests and for those profiting off a very, very broken system.” He mentioned that a Rasmussen poll found that he had 55 percent approval – Gallup’s most recent tracking poll found he had 40 percent support — and said “the stock market has hit record numbers, as you know.”

“I’m here today to update the American people on the incredible progress that’s been made the last four weeks since my inauguration,” Trump said. “I see stories of chaos. It’s the exact opposite. This administration is running like a fine-tuned machine.”  “There’s zero chaos” he claimed, and pivoted to Obama: “To be honest I inherited a mess,” Trump said. “It’s a mess. At home and abroad.”

The president then launched into a laundry list of issues on which he has claimed victories and progress, including border security, combating the Islamic State, job creation and a reduction of government regulation.

“In each of these actions I’m keeping my promises to the American people. These are campaign promises,” Trump said. He said the steps he’s taken in the four weeks since he was sworn in should surprise nobody, especially in the media.

But the highlight was his all out attack on the press :

“I’m making this presentation directly to the American people with the media present, which is an honor to have you, this morning, because many of our nation’s reporters and folks will not tell you the truth. And will not treat the wonderful people of our country with the respect that they deserve.”

“Much of the media in Washington, D.C., along with New York, Los Angeles in particular, speaks for the special interests and for those profiting off the obviously very, very broken system.

“In other words, the media is trying to attack our administration because they know we are following through on pledges that we made, and they are not happy about it, for whatever reason. But a lot of people are happy about it.”

There was much more, including some of the key exchanges with the members of the press corps:

And some further details:

Trump discussed his popularity and how well the administration is doing…

Trump lauded a new poll from the conservative-leaning Rasmussen that found he holds a 55 percent approval rating, significantly higher than other recent polls.

Additionally noting that Mike Flynn “did nothing wrong”…

“I’m here again to take my message straight to the people,” POTUS stated. “As you know, our administration inherited many problems across government, and across the economy.”

“Jobs are pouring out of the country — you see what’s going on with all of the companies leaving our country, going to Mexico and other places — low pay, low wages, mass instability over seas, no matter where you look, the Middle East, a disaster. North Korea.”

Trump then slammed reports of his advisers and associates being in contact with Russians during campaign:

*TRUMP: I OWN NOTHING IN RUSSIA, HAVE NO DEALS OR LOANS THERE

Some additional excerpts include:

“US 9th Circuit Court is in turmoil and chaos”

“The tone of media coverage is full of such hatred”

“I’m really not a bad person”

“I didn’t divide this country, it was divided when I got here”

“There are two Chicagos – one is posh, safe; one is crime-ridden”

“Rep. Cummings said meeting Trump would be bad for him”

“The whole Russian thing is a ruse”

Trump then touched on the topic of a Russian reset, which he explained as follows: 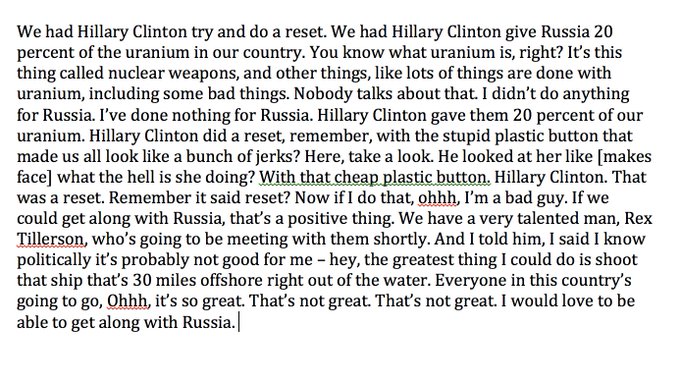 Here is Donald Trump talking about the uranium.

“I watch CNN. It’s so much anger and hatred and just the hatred. I don’t watch it anymore”

“The leaks are real, the news is fake”

Finally, President Trump was called out on his ‘alternative fact’ about the electoral college votes.. “why should Americans trust you?”

Summing it all up…

From a buddy of mine out west. 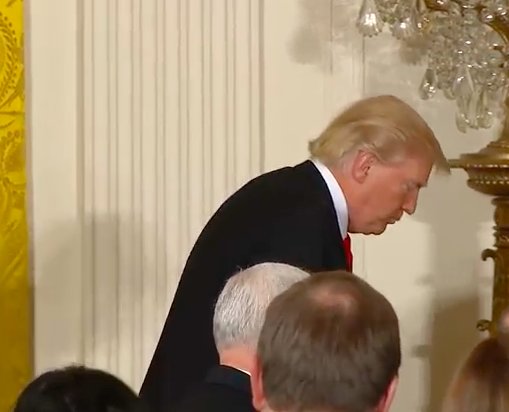 The full “unorthodox” press conference below: