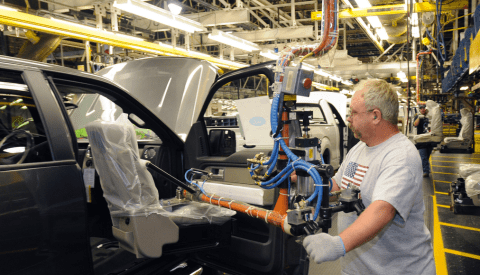 Editor’s Comment: Though his administration is still taking shape, President-elect Trump may be able to claim his first tangible victory. Though Ford Motors were resistant to Trump’s trade policy positions and threatened to move jobs to Mexico, the CEO has now announced that, instead, production will remain American.

Is Trump pulling televangelist-style miracles – with arrangements ahead of time in the back room – or is he making things happen because he is in a position to make good on his policy promises? Either way, Ford and other big companies will be keeping optics in mind when they decide whether or not to play ball with the wild card Trump administration (at this point, still to be). If this actually becomes the trend, perhaps there is a lot of positive that can be done for the economy, and perhaps good paying jobs can return for struggling working class Americans. Only time will tell, but he hasn’t even assumed office yet.

Just hours after Ford CEO complained of the “huge impact” of Donald Trump’s proposed trade plans, following the company’s plan to move a substantial portion of its passenger-car production to Mexico from a factory in Michigan, Donald Trump tweeted “Just got a call from my friend Bill Ford, Chairman of Ford, who advised me that he will be keeping the Lincoln plant in Kentucky — no Mexico,” seemingly winning his first ‘america-first’ victory.

As WSJ reported yesterday, Ford Motor Co. Chief Executive Mark Fields issued a warning about President-elect Donald Trump’s proposed trade policies, saying high tariffs on automobiles and other products coming into the U.S. would be a blow to the auto industry and broader U.S. economy.

Mr. Fields, speaking with reporters on the sidelines of the Los Angeles Auto Show on Tuesday, said Ford has talked to Mr. Trump’s transition team and believes the company can work with the new administration. During a separate interview, he said, “We all share the same objective; we want a vibrant and healthy U.S. economy.”

The two sides, however, appear to be at odds on how to achieve that goal.

Ford’s plan to move a substantial portion of its passenger-car production to Mexico from a factory in Michigan was heavily criticized by Mr. Trump on the campaign trail. Like many of its rivals, Ford is building more-profitable light trucks in the U.S. while investing in new capacity in Mexico to produce lower-margin small cars.

Just got a call from my friend Bill Ford, Chairman of Ford, who advised me that he will be keeping the Lincoln plant in Kentucky – no Mexico

I worked hard with Bill Ford to keep the Lincoln plant in Kentucky. I owed it to the great State of Kentucky for their confidence in me!

Maxine Waters To Trump: “Get Ready For Impeachment”

Here’s Why Liberals Are Suddenly Embracing the 2nd Amendment