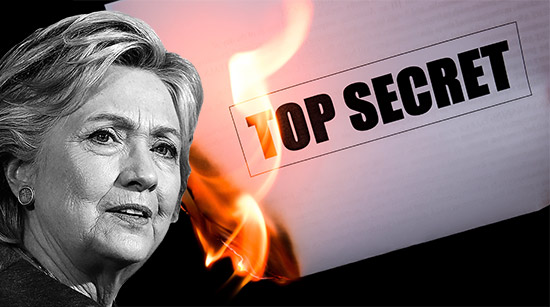 Editor: I hesitated to write on this topic, although I noted it at the time.  I’m choosing to write on it now because I’m not the only one who noticed it (obviously) but others are writing about it in public, so my doing so cannot do further harm.

All military powers have secrets.  Some of them are more-serious than others, in that the harm done if they’re revealed varies.  When it comes to the modern age information about our nuclear weapons programs is some of the most-secret, and with good reason — you never want an adversary to know what you’re capable of and you especially don’t want them to know both what you can do and how long it will take you to do it.

Hillary said the following in the debate last night:

“But here’s the deal. The bottom line on nuclear weapons is that when the president gives the order, it must be followed. There’s about four minutes between the order being given and the people responsible for launching nuclear weapons to do so.”

Hillary probably knows exactly what those timing constraints are because as Secretary of State she had to know.  But such information is extremely sensitive and thus highly classified, almost-certainly at an SAP level (that is, “beyond top secret” as is claimed in the referenced article) because it would give an adversary critical data on our response to a potential attack and allow them to know what they must achieve to get inside our “OODA” loop.  If an adversary gets inside that loop in a fight for your life you usually die.

“OODA” stands for “observe”, “orient”, “decide” and “act”.  It is the basic principle on which essentially all combat decisions rest.  In order to make wise decisions in combat you must perform all four steps, in order, for each offensive or defensive act you take.

All of these steps take time.

There is a romanticized view of war that comes in no small part from the media and entertainment industries — that one decides to do something and it “just happens.”  The number of films that put into a real-time context the fact that this is never how it occurs in real life is very small — but certainly not zero.  For instance, Pearl Harbor showed the Doolittle Radier sequence, which had a huge time delay (hours) between the irrevocable decision to “go” (when the planes left the deck) and the outcome for the crews (those who didn’t die were almost to a man captured in China and tortured horribly.)

The decision to use nuclear weapons is one of the greatest responsibilities that a President may be called upon to undertake.  There is nothing, ever, about the process for their release that is not considered sensitive and essentially all of it is classified at Top Secret or better.  This is especially true when it comes to latency between an order and execution; we have spent an enormous amount of money over the decades since WWII putting in place and maintaining surveillance on a world-wide basis for the explicit purpose of detecting our adversaries intentions during their latent period between a command and the launch event, and both we and our adversaries have spent a hell of a lot of money shortening those windows.

Early ICBMs were liquid-fueled and it took quite a long time to fill the missile tanks before you could fire them.  This was a tremendous deterrent to their use, in that if we detected such a fueling we could fuel our missiles and thus prevent the nightmare scenario — being caught with warheads raining down on you while your retaliatory strike capability is on the ground!

These timelines have been dramatically shortened over the years, but it still takes time to complete that OODA loop should the horrifying reality of having to use nuclear weapons occur.  The amount of time it takes is a very serious secret that simply must never be leaked because if you do then an adversary knows what they must achieve in order to catch you with your pants down.

The Cuban Missile Crisis was as serious as it was precisely because Russia’s decision to place those missiles on the Cuban coast dramatically shortened the warning time that we would have from a “go” order being given and cities in the southeast — including Miami — being reduced to a smoldering ruin.  That was why we nearly went to war; the presence of such weapons in that location made a decision to shoot by Russia an act that would get inside our nation’s OODA loop given the technologies of the time.

For 60-odd years the threat of overwhelming response has kept our world free of offensive nuclear weapons use.  That threat is reliant on nobody knowing exactly what they must achieve to get inside their adversary’s OODA loop and kill them before they can respond.  That is why such information is by any realistic determination one of any nuclear nation’s mostly-closely guarded secrets and Hillary Clinton revealed that secret on national television last night.

What’s far worse is that given her former position we know what she revealed was not a guess.

It won’t, but it damn well should, because she just gave away, on national television, exactly what an adversary must achieve in order to kill us all and she did so not as a matter of guesswork or hypothesis but from actual, classified knowledge.  At the same time we damn well ought to demand the arrest and prosecution of James Comey, who quite-clearly intentionally threw his investigation into prior classified material mishandling by Hillary and had he not Hillary would have been under indictment and thus unable to leak said information last night.

“What difference does it make” won’t do as an excuse when all that’s left of us is a smoldering hunk of charcoal.

Karl Denninger is the author of Leverage: How Cheap Money Will Destroy the World in which he discusses the ill-use of leverage and how it is destroying the global economy, as well as where all of this will lead. The result is ugly: the value of everything—including gold—falls, and even personal safety is at risk in a world where there is limited money even for essentials like food and fuel.

Hillary Is Either a Liar Or She’s Grossly Incompetent: “There Is No Other Interpretation Possible”

This Is The Risk America Faces Now: “An Irrevocable Series Of Events… Up To and Including Civil War”

Surviving A Mass Shooting: This Is What You Must Do If Confronted By An Assailant Who Is Intent On Killing You

An 11 Year-Old Demonstrates Gun Control: “Not Only Good Judgment But Also Good Marksmanship, Striking Only the Intended and Lawful Target”

The Impending Catastrophe: “It’s Not Difficult To See This Coming”