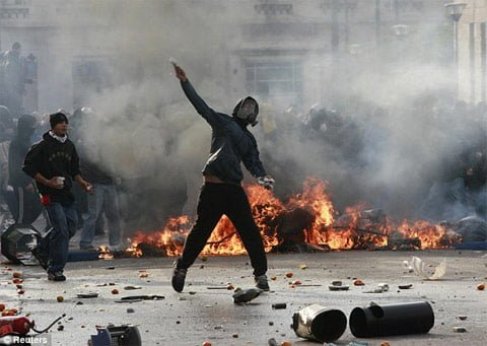 This article was written by Mike Adams and originally published at NaturalNews.com.

Editor’s Comment: There are those of us who’ve seen it coming. The consequences of the strangest election in U.S. political history, and the rise of a new type of American president, who defied the establishment. Both sides have been riled up, and see the best and worst over sharply divided issues and actions in this country.

The flame-filled protest against Milo and the ongoing opposition to President Trump from the bitter and angry left have demonstrated an actual blood lust, and a revolutionary fervor against what they see in tyranny. These will be times much, much crazier than the counter-culture revolution and anti-war protests of the 1960s, in fact things could get quite dark. Likewise, a contingent of the new, alt right that elected Trump was born out of a “tea party” spirit against what they see as government overreach, abuse of power, violations of the constitution and a usurpation of power. They are, many of them, extremely-well armed (and in some cases trained) patriots who are very responsible and restrained in violence, but who will take no shit if law and order breaks down.

Whether or not this bitter divide ever breaks down into tangible violence and actual hot warfare aside, the atmosphere is extremely vitriolic and potent.

Thanks to the invocation of “journo-terrorism” by the anti-American Left-wing media, brainwashed libtards now believe they are free to engage in unbridled violence and acts of terrorism against Trump supporters, white people and all conservatives. They justify their extreme violence by falsely claiming that “Milo is Hitler” or “Trump is Hitler” or, essentially, (pick your targeted enemy) is Hitler. (RELATED: See more examples of libtard stupidity at STUPID.news)

Yet it is those on the Left who are the Brownshirts… the book burners… the intolerant haters of free speech, law and order. Just recently, a Black Lives Matter activist who also teaches preschool was caught on video screaming through a megaphone, calling on supporters to “start killing people.” Watch the video here and listen for yourself:

Via the Daily Caller:

During an anti-Trump protest in Seattle this weekend, an activist associated with the Black Lives Matter (BLM) movement took to the megaphone to voice her support for, among other things, “killing people,” and “killing the White House.”

While she said that, another protester can be heard saying, “Burn it!”

In a blog post for Foreign Policy magazine, Rosa Brooks, a former Obama administration official, outlined four ways to “get rid” of President Trump, including declaring him mentally unfit for command or carrying out a military coup.

Brooks is a Schwartz senior fellow at the New America Foundation, which is funded by billionaire George Soros’s Open Society Foundations. She served from 2009-2011 as Counselor to the Under Secretary of Defense for Policy and served as a senior adviser at Obama’s State Department.

Natural News calls for President Trump to crack down on Left-wing media lies, BLM violence and domestic terrorism of the unhinged Left

I’ve just posted a new podcast that calls for President Trump to take decisive action to halt the extremist violence, indoctrination and traitorous actions of the nut jobs on the Left. Note carefully that former President Barack Obama — a “sleeper cell” Muslim traitor who deliberately sought to destroy America — has not issued any call for protesters to stop the violence. Nor has Hillary Clinton or any political leader on the Left.

This article was written by Mike Adams and originally published at NaturalNews.com.

Trump Says “No” to World Money

Trump Takes up Again the Fight Against the US Establishment