After addressing a cybersecuirty conference in London, notorious hacker ‘Guccifer’ shared over 500Mb of documentsdetailing 100,000 DNC donors contact info and donations. A large number of the largest donors received senior diplomatic or political positions following thge donations, ranging from UK Ambassador to Assistant Attorney General. The DNC released a statement pre-emptively claiming that this was the work of Russia (and reigniting Trump’s links to Putin).

Here is the first cut of the alleged major donors on the leaked documents and the positions they received (via Magafeed.com)

The DNC responded to the latest hack claim Tuesday through its Interim Chair Donna Brazile, who stated that the“DNC is the victim of a crime,” which she blamed on “Russian state-sponsored agents,” while also cautioning that the hacked documents were still being authenticated by the DNC legal team, as “it is common for Russian hackers to forge documents.” DNC pre-emptively published a statement in an attempt to change the narrative… 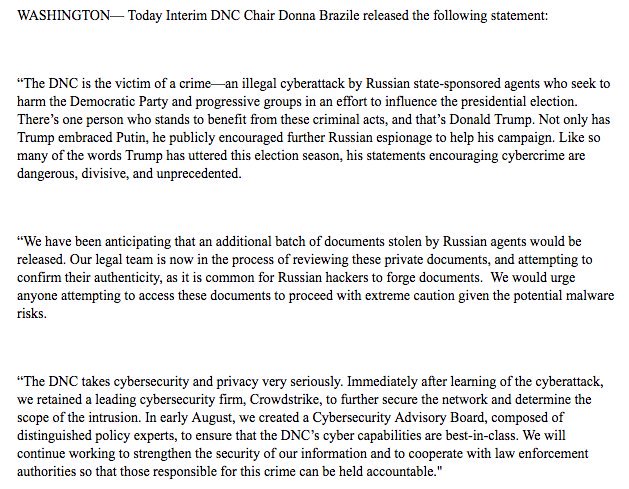 The DNC is bracing itself for the release of more documents

Once again blaming Russia (and Trump)… As RT reports, it’s not the first time that the name of Vladimir Putin has been brought up in the US presidential campaign, but this time the US president used this “argument” while openly campaigning for Clinton against Trump. The situation has become “really ludicrous and it borders on the ridiculous,” believes Gregory R. Copley, editor of Defense & Foreign Affairs.

“In my 50 odd years covering the US government, I have never seen this level of partisanship within the administration where a sitting president actually regards the opposition party as the enemy of the state,” Copley told RT.

The analyst said that the democrats are “blaming the messenger to revert the attention from the message.”

“The message which Donald Trump delivered on RT was unambiguous in his campaign. Just like the fact that WikiLeaks revelation of the hacked emails was very explicit in showing up what the Democratic party itself was doing,” Copley added.

The US establishment is “sacrificing key bilateral relationships in order to win [a] domestic election,” believes Copley. He added that neither Obama nor Clinton are interested in unifying the country, but they are rather “interested in winning and engaging in what modern democracy seems to have become – the tyranny of the marginal majority over the marginal minority.”

“When you think about the number of times that the Clinton campaign has brought up President Putin and the alleged Russian hacking of Hillary Clinton’s service, it makes you wonder just how desperate they are,” Copley noted. “President Obama has lost literally all prestige in an international community…with the loss of prestige he has become desperate.”

Some of the alleged major donors (via Magafeed.com)

Richard Lobo was nominated by President Obama to be Director of the International Broadcasting Bureau in February, 2010, and was confirmed to the post by the Senate in September of that year.

You can find Caren Lobo’s donation in this photo.

Pamela Hamamoto paid DNC $605,000 then became the Permanent Representative of the United States of America to the United Nations and Other International Organizations in Geneva.

Jane Hartley paid DNC $605,000 and then was nominated by Obama to serve concurrently as the U.S. Ambassador to the French Republic and the Principality of Monaco.

Crystal Nix-Hines paid DNC $600,000 and then was nominated by President Obama to the position of United States Permanent Representative to the United Nations Educational, Scientific and Cultural Organization with the rank of Ambassador.

Robert A. Mandell donated $1,121,250 to the DNC then President Obama named Mandell the Ambassador to Luxembourg in June 2011.

You can find Robert Mandell’s donation in this photo (as Bob Mandell).

You can find Robert Mandell’s donation in this photo.

Karol Mason donated $856,000 to the DNC and Obama appoints her as Assistant Attorney General, Office of Justice Programs.

Mind-Altering Drugs: Are Statins the Cause of Widespread Brain Dysfunction?