You were born free … a bundle of tremendous potential.

You were loved, and loved unconditionally.

The concept of lack was foreign to you.

As you grew you started to question the world around you.

You hunted fireflies on warm summer nights and you put them in jars to light your room at night.

And the door to your imagination was never locked.

Einstein said, “Education is not the learning of facts, but the training of the mind to think.”  But government schools were more interested in you becoming an obedient drone … and they wound up killing your joy of learning.

You were ridiculed when you challenged the status quo.

You were judged … and so learned to judge others.

And so you allowed group mentality to sway your actions and decisions.

The Powers That Be worked very hard to make you believe you have no power, no control. So, you did as you were told, and feared the consequences of what would happen if you did not. You became ruled by fear.

But, your beliefs were formed by television programming.

And what your culture says you should believe about God …. pick one.

And by what your government wants you to believe about itself, and what you should sacrifice for blind Patriotism.

You sought news of the world … but were fed propaganda.

You were presented with continuous distractions to keep you from questioning the reality around you.

You were kept deliberately ignorant.

You were given hope … that you could effect change by voting. But hope was crushed when you realized both parties played the same hand.

So, you joined the rat race as no other options seemed evident. 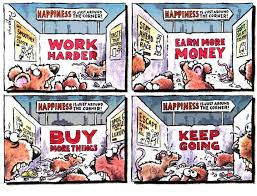 You were trained to be a consumer.

You bought into The American Dream.

They fed you poison.

You ….. conformed. Is it any wonder you feel confused and hopeless?

But … you’ve felt it all your life …. that it’s all just an illusion.

You let the past dictate your present, and you worry about your future. But you only have the present … living in the moment is all you can do.  Once you realize no one has power over your thoughts … you will never again act against your will.

Just remember who you are … the same soul that was born all those years ago (though your years may be closer in age to the hands holding the baby).

But, years of conditioning almost completely eroded your sense of who you are, and the power within you. Don’t you want to change? Will you roll the red die, or the green one?

It’s your choice, completely. The labels you were given as you lived your life no longer fit. Simply choose to start believing again in your infinite potential.

The Chinese philosopher, Lao Tzu, said;  “The journey of a thousand miles starts with a single step.”  So ….

The universe is in your hands. You were born free, you will die free … but will you LIVE free?