As more details about the Manchester suicide bombing emerge, it appears that the attack, as we noted in initial reports last night, was coordinated by radical Islamic extremists.

The Islamic State has claimed responsibility, saying that a solider of their Kaliphate was directly involved:

“With Allah’s grace and support, a soldier of the Khilafah managed to place explosive devices in the midst of the gatherings of the Crusaders in the British city of Manchester, in revenge for Allah’s religion, in an endeavor to terrorize the mushrikin, and in response to their transgressions against the land of the Muslims.  The explosive devices were detonated in the shameless concert arena, resulting in 30 Crusaders being killed and 70 others being wounded.  And what comes next will be more severe on the worshipers of the Cross and their allies, by Allah’s permission.  And all praises due to Allah, Lord of the creation.”

Now, just hours after the incident, it has been revealed by numerous mainstream reports that a member of the Islamic State made a threat approximately four hours before the explosion that killed at least 22 people.

According to Express UK and Huffington Post, a user by the name of ‘owys663’ (now suspended) posted a Tweet in which he specifically identified Manchester as a terror target utilizing hashtags.

The messages appeared to predict the atrocity at the arena filled with 21,000 fans.

One message said: “Are you forget our threat?”

Followed by: “This is just the beginning.”

The tweets, which are not verified, are time-stamped at 6.24pm, four hours before the bomb went off. 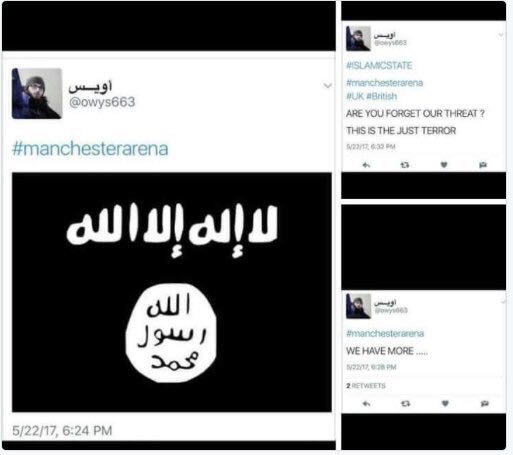 @janders9414 @owys663 It was posted before the explosion, look at the time… pic.twitter.com/AbL17txqMP

Speculation abounds as to whether the tweet was legitimate or not, with some users claiming that the time stamp on the original tweets from the Islamic State supporter were posted outside of the UK, and perhaps stamped with a local time in the United States, making it appear that it was posted four hours ahead of the incident.

That the Islamic State has claimed responisibility and that it is possible that the now suspended Islamic State twitter account posted this tweet ahead of time indicates significant coordination and planning.

With 3,500 Islamic terrorists reportedly living in the United Kingdom, and with Islamic State actively working to develop chemical weapons of mass destruction, it appears that this is, indeed, just the beginning.