It was the third consecutive night of anti-Trump protests taking place in various US cities, with Oakland once again a venue of extensive looting and arrests under the guise of “peaceful” protesting, especially since as we reported, the local mayor admitted the police is now powerless to take on looters…

… but the real epicenter was Portland, Oregon, once famed as “Little Beirut” for its opposition to George H.W. Bush, and the city which the Associated Press declared as the center of America’s anti-Trump feeling, where at least 26 people were arrested during anti-Trump protests the police said, adding that officers deployed stun grenades, pepper spray, “rubber ball distraction devices” and various other non-lethal munitions to disperse the rally. The demonstration against President-Elect Donald Trump has gathered for yet another night in the Pacific Northwest city.

According to Wilamette Week, Portland Police have deployed stun grenades and rubber bullets on protesters near Pioneer Courthouse late tonight, after anarchists smashed the windows of shops in downtown and the Pearl District.

The use of so called “flashbangs”—loud explosive devices designed to stun and disperse crowds—came near midnight, and police said they were deployed as protesters threw projectiles at officers. 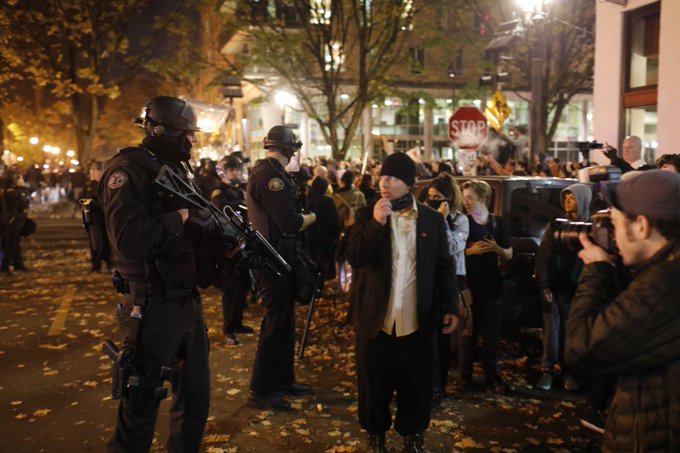 At least one reporter, with WW’s news partner KATU-TV, was hit by a rubber bullet, apparently fired by riot police.

Around 4,000 people started their protest at Pioneer Courthouse Square and moved to northeast Portland, according to The Oregonian daily. Police on Twitter wrote that protesters were preparing “gas and flares” and were “arming themselves with rocks from construction site.”

The demonstration blocked traffic in the city as protesters moved across other major roadways, local media reported.

Police in Portland, Oregon, declare anti-Trump protest a riot amid “reports of attacks on drivers and vandalism.” http://abcn.ws/2fGXGtV

At least 19 cars at Toyota of Portland were vandalized, a sales manager told the paper. Later police reported of new cases of vandalism in the city. Photos on social media showed the smashed windows of local shops.

Portland activist Greg McKelvey said Thursday that several human rights groups in the city would be working together under the new name, Portland’s Resistance.

“In order to survive President Trump there needs to be a strong resistance. Our group believes that Portland has an opportunity to become a beacon of light for the rest of the nation,” McKelvey wrote in a press release on Facebook. The group has scooped over 3,000 likes so far. 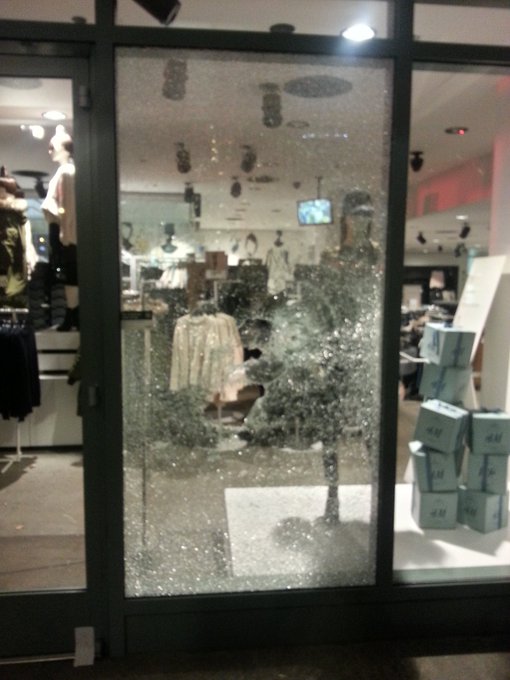 This just happened at @H&M in downtown #Portland#LiveOnK2

Thousands of people have been out in the streets across the US, since Trump won the 2016 presidential race with 290 electoral votes November 8, leaving Hillary Clinton officially behind, although she won the popular vote. 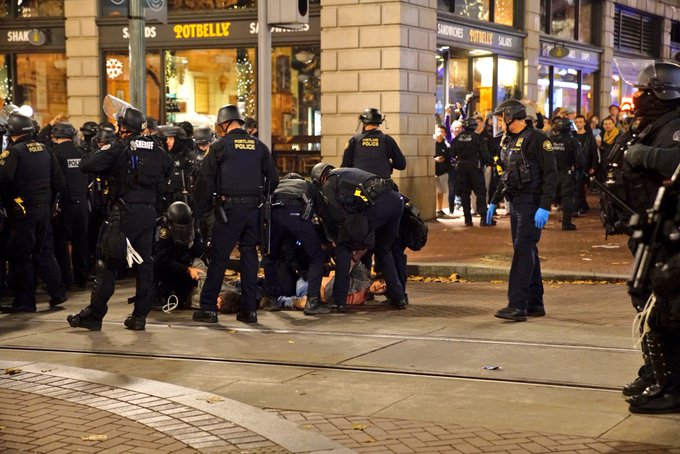 Chanting anti-Trump slogans, such as “not my president” or “we reject president-elect,” people have been occupying streets in cities from California to New York, expressing their displeasure at the presidential race’s outcome.

During the demonstrations, Trump took to Twitter on Thursday, lashing out at “professional” protesters, who have been rallying against his election since Wednesday.

“Just had a very open and successful presidential election. Now professional protesters, incited by the media, are protesting. Very unfair!” Trump wrote in a tweet.

Just had a very open and successful presidential election. Now professional protesters, incited by the media, are protesting. Very unfair!

However, just a few hours later he appeared to U-turn, instead praising the “passion” of protesters, vowing to bring the country together as president.

Love the fact that the small groups of protesters last night have passion for our great country. We will all come together and be proud!