Perhaps against better judgment, I just can’t keep silent about the Michael Cohen’s in da House show performed on February 27. I was watching it and increasingly fearing for the future of America. We had all been able to read his prepared statement before he opened the party with it, and therefore we all knew there was nothing there. So why did this thing take place, and why were all the cameras and reporters there? Do we live in split realities these days?

Both before and after the gruelling -for the viewer- session, words like ‘explosive’ and bombshell’ were all over, so I thought I’d watch, since I might have missed something, but no, there was nothing, there wasn’t even a there there. Apparently, US House members are by now immune to being revealed as nutcases frantically phishing for evidence of accusations they formerly made but could never prove.

A phishing expedition with a willing whale in the center who sort of volunteered to be harpooned, and still came up with absolutely nothing but blubber. And then like 4 hours of that. There’s never been a more convincing picture of what US politics and media have become. But they’re all entirely impervious to it. They’re discussing nothing for hours on end with millions watching, and they see it as normal.

Now, I’ve been following the decay of the American press ever since Trump entered politics stage right, and I’ve written a hundred thousand words about it, but it really hit home during the Cohen session. Tellingly, the Republican House members were exclusively focusing on Cohen credibility, since he had been caught lying to Congress before, and the Supreme Court just days ago disbarred him.

But this was not about the man’s credibility, and sure, I felt sorry for him too, it was about the fact that he had nothing at all to say, but Republicans had nothing on that. They instead joined the Dems in questioning him about nothing, pretending it was big and explosive and stuff. If anything has ever resembled the Emperor’s new clothes, it was that charade there yesterday.

If you insist, we can walk through a few of the topics. A nice example that was not in the prepared statement was that Cohen claimed he had never wanted a White House job, but even the CNN pundits were saying he had wanted one for a long time, and was very insulted when he didn’t get it. Poof! went the last shred of his credibility. Well, not for the House members, they have shorter memories even than CNN talking heads.

Second, the issue of a Trump Tower in Moscow, about which Cohen allegedly lied earlier on, in that the plans were shelved later than he had claimed. But the only thing that really interests the House, because even they understand that wanting to build a hotel in the city is not some criminal thing, is Russiagate, invented out of thin air but still popular stateside.

The one thing related to this that collusion ‘experts’ emphasize time and again, and it came up again in the Cohen thing, is that Trump supposedly planned to gift a penthouse apartment in a potential Trump hotel on Red Square to Vladimir Putin. Conveniently, not a single American appears to have wondered whether Putin would be interested in such a gift.

And I can assure you he wouldn’t. Putin can get -just about- any piece of real estate he wants on Red Square, besides he already has the Kremlin, and he can get anything built there which he might desire. Accepting a free dwelling from a US builder makes no sense. Why should he? Still, this is one of the main items Russiagaters keep coming up with. It makes no sense, and that’s fitting, because neither do they.

In France, this all plays out a bit more openly, though never in the open, but in the US you can break the pact if you want. And since the initial story was that campaign funds had been used to pay Stormy Daniels, there was a potential criminal angle. But we now know that that angle was fake, so no there there either. Trump paid so it (true or not) didn’t become a big campaign story, and that he did so just before an election is irrelevant, because the whole topic is irrelevant. Unless you want to exhume JFK.

Third and what pisses me off more than anything, is that Cohen both volunteered, and was coaxed into, talking about Roger Stone’s alleged contacts with Julian Assange. Cohen talked about a conversation between Stone and Trump on July 18-19 2016, in which Stone allegedly said he had talked to Assange who told him WikiLeaks was going to release a big batch of Hillary-related mails.

The DNC convention was July 25-28, the WikiLeaks release July 22. Looks like a slam-dunk collusion story, right? Except that Assange had said 5 weeks earlier, on June 12 2016, that such a batch would be released. So even if Stone had talked to him, there was no news there. Moreover, both Assange and WikiLeaks have repeatedly denied the conversation ever took place. And of course Assange can’t defend himself against anything anyone says anymore.

And we can keep going: the assertion that the DNC mails were hacked has been refuted many times, and if they were stolen it was by someone inside the DNC. No story, no collusion, no there there. Only hour after tedious hour of Michael Cohen House testimony about nothing at all.

It felt a lot like a new low point in US political history, but you need to be careful with such classifications these days, since competition’s stiff and still picking up. I liked the following lines from an article in the Guardian this morning to appropriately describe the goings-on:

“Trump’s former fixer cautioned that he could not prove the “collusion” with Moscow that the president vehemently denies. Still there was, Cohen said, “something odd” about the affectionate back-and-forth Trump had with Vladimir Putin in public remarks over the years.

Here’s the best thing Cohen could do in the entire time wasted on the topic:

“There are just so many dots that seem to lead in the same direction,” he said.”

How does that not make you want to scream? No collusion, only “something odd”, and “so many dots”. A thorough analysis out of the mouth of an at least questionable character who worked closely with Trump for a decade. That’s all the US House of Representatives had to show for the show it put on. And that’s a really big problem, but there’s no-one in sight to address, let alone rectify, it.

There are a thousand things wrong with Donald Trump, but even though that would not necessarily disqualify him for the presidency, the Democrats and the mainstream press have opted to go all-in on the Russia collusion theme, which even two years and change of Mueller hasn’t been able to prove.

Whether this will be the winning ticket for the Democrats in a next election is very doubtful, and what the press hope to get other than a few more readers and viewers addicted to scandals is anyone’s guess. But more importantly: why do they do it? Why focus on all the made-up stories instead of going out and finding the real ones?

Even if the Cohen show not constitute a new low, it was certainly scraping the gutter of American political reality, and someone better do something, or entirely new and thus far unimaginable lows will be attained. Not a single national political system can survive on entirely trumped-up accusations for long, let alone that of the globe’s most powerful nation. Does anyone ever wonder what the Dems will do if Trump wins again in 2020? Where can they flee to?

I’ll leave you with a few Twitter voices who also see no there there. Note: the first one is dated July 7 2016, some two weeks before Stone -unverifiably- said he talked to Assange (who always denied it, but it wouldn’t matter even if he had) : 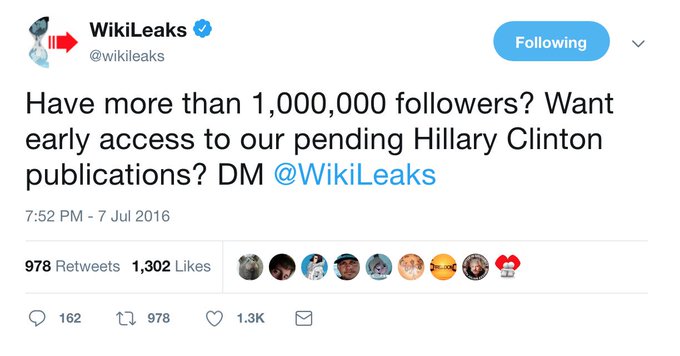 Cohen said the purported conversation between Trump and Stone took place on July 18 or 19. Here’s WikiLeaks promoting the upcoming release of Hillary-related emails on its *public Twitter account* on July 7! Idea that Stone ever had special foreknowledge is totally unsupported

STATEMENT on Michael Cohen testimony to Congress: WikiLeaks publisher Julian Assange has never had a telephone call with Roger Stone. WikiLeaks publicly teased its pending publications on Hillary Clinton and published > 30k of her emails on 16 March 2016. https://wikileaks.org/clinton-emails/

The DNC was July 25-28, 2016. Assange announced the first of many times an upcoming leak on June 12, 2016. Therefore Cohen testifying to hearing about it in a meeting in a July, “days” before the DNC (how many days?), doesn’t speak to “advance” knowledge in any real sense.

Do Russiagate peddlers get how bad this has gone? Cohen:

– “I do not” have collusion evidence
– “Trump did not directly tell me to lie to Congress” (cc @BuzzFeedBen)
– Stone told Trump public info re: WL & false info re: Assange

& we haven’t even heard his Prague denial yet.

Putin’s Self-Defense Warning Twisted as ‘Unacceptable Threat’ to US