As part of its periodic report on “Society at a Glance” which looks at how youth across member states are faring in terms of several social indicators, such as employment, poverty, marriage and health, the OECD also provided a unique glimpse into modern household composition, namely the percentage of young adults, those aged 15-29, living at home. What it found is that since the Great Recession, there have been significant shifts worldwide in the number of young adults living at home.

From 2007 to 2014, the number of youth living at home in countries belonging to the Organization for Economic Cooperation and Development increased by 0.7%, rising to 59.4%.

As expected, the nations hit hardest by the global economic slowdown such as Italy, Slovenia and Greece had the highest percentage of youth living at home with their parents, at 80.6%, 76.4% and 76.3%, respectively. In itself, that is hardly surprising, since countries like Greece and Italy were not only among the harfest hit by the recession, and have a culture of young adults living longer at home, but also have some of the highest unemployment rates for young people. In fact, as the chart below shows, some 15% of young adults in OECD countries, or a whopping 40 million, were what the report classifies as NEET: not in employment, education or training, with both Italy and Greece at the very top, just behind Turkey. 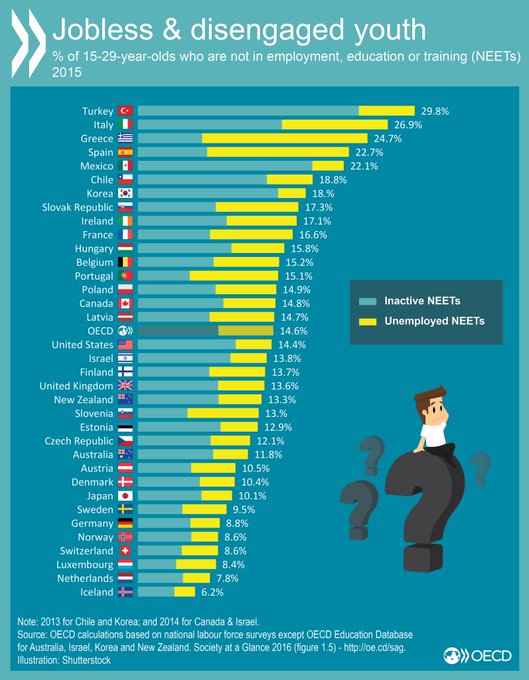 On the other end of the spectrum, Canada had the lowest percentage of youth living with parents, with just 30% of the country’s youth still living at home. The Nordic countries, including Denmark, Sweden, Finland and Norway, also had low numbers of young adults living at home.

In terms of deterioration, France was by far the leader, with the number of young people cohabitating with their parents rising 12.5% to 53.5% from 2007 to 2014. Report authors attribute the increase in part to the high numbers of young adults in France who are not in the workforce or in education. In France, some 16.6% of young adults were not in a job or education institution in 2015, also a notable an increase over the previous few years. Cited by US News, Claire Keane, an economist with the OECD’s social policy division said that “we really think this is a crisis story,” In France, she says, many benefits flow through families to reach young people. “They are relying on parents for financial support.”

As for the US, there has been a 3.9% increase in the proportion of youth living with their parents from 2007 to 2014, significantly higher than the OECD average. As a result, today, about 66.6% of American 15- to 29 year-olds with their parents as opposed to on their own or with a roommate, compared to around 62.8% before the crisis.

The report’s findings comply with a recent Pew Research Center analysis, which found more young adults (the Pew study cohort was ages 18-34) in the U.S. living with their parents than at any time since around 1940.

A summary breakdown of the entire’s report’s finding is shown below:

A full, interactive breakdown of the study’s metrics is presented below.

These Americans Are Preparing For War With Their Own Government

Macron’s ‘Brain-Dead’ NATO?.. Thou Protest Too Much