[This column was written for the Unz Review]

Frankly, I have never considered USN carrier strike groups as a “Cold War capable” element of the US Navy.  Yes, in theory, there was the notion of forward deploying these carriers to “bring the war to the Soviets” (on the Kola Peninsula) before they could flush their subs and aircraft through the GUIK gap and into the Atlantic.  In theory, it should have been a 600 ship navy too, but that never happened.  In reality, of course, US strike groups were the ultimate “colony disciplining” instrument which Uncle Shmuel would park off the coast of a country disobedient to the demands and systematic plundering of the USA.  Since most countries in the 20th century could not sink a US carrier or prevail over the comparatively advanced aircraft deployed on them, this was, all in all, a very safe game to play for the USA.

As for “bringing the war to the Soviets”, the truth is that had it ever come to a real war, the US carriers would have been kept far away from the formidable Soviet cruise missile capability (delivered simultaneously by aircraft, surface ships and submarines) for a very simple reason: every time such an attack was modeled a sufficient number of Soviet missiles successfully passed through the protective cordon around the carrier and successfully hit it with devastating results (while sinking a carrier is not that easy, damaging it and making it inoperable does not take that many missile hits).

And that was long before hypersonic missiles like the Kinzhal or the Zircon!

Truly, as an an instrument to deter or defeat the Soviets the USN strike groups were already obsolete in the 1980s, that is long before the the Russians deployed their hypersonic missiles which, as my friend Andrey Martyanov explained in his books (see here and here) and on his blog (see here), basically made the entire US surface fleet obsolete not only to fight Russia, but also to fight any country which possesses such missiles.  Such countries already include India and China, but there will be many more soon, probably including Iran!

Today, however, I won’t discuss the missile issue, but what happened recently on the USS Theodore Roosevelt, which you probably know about: her captain got fired for writing a letter (according to his accusers, bypassing the chain of command) asking for help because his crew got infected by the virus.  His letter was published by the San Francisco Chronicle and you can read it here.

Interestingly, when the captain, Navy Capt. Brett Crozier, left the ship, his sailors gave him a standing ovation:

Next, Acting Navy Secretary Thomas Modly called Captain Crozier “stupid.  That also became public, and he had to apologize and resign (clearly, Modly is not exactly a genius himself!).  Then even more of the crew of the carrier got sick, including Crozier himself!

There is, however, also a lot of interesting stuff coming out from this story.

First, the obvious: USN carriers cannot operate effectively under a bio-attack (a truly weaponized virus would both be much more transmissible than SARS-COV-2 and it would be far more deadly).  This also indicates that they would probably do no better under a real chemical warfare attack either.

Considering that in reality USN carriers are a instrument of colonial repression and not ships to be engaged against the USSR (which had real biowarfare capabilities), this makes sense (while most university labs & the like could produce some kind of virus and use it as a weapon, truly weaponized viruses, the kind effectively used in special delivery systems, can only be produced by a limited list of countries).  However, in theory, all the formations/units/subunits/ships/aircraft/armor/etc of a military superpower should be trained to operate in case of a nuclear, chemical and biological attack.  Clearly, this is not the case with US carriers, most likely because nobody in the USA really expected such an attack, at least not during the Cold War.

For the current situation, however, I think that the lesson is clear: the USN simply does not have an effective capability to operate under NBC attack conditions.

By the way, this appears to also be true of the French, whose only carrier has 30% infected sailors!

Second, I agree that going outside the chain of command is wrong, but let’s also consider the following here: the fact that the USS Theodore Roosevelt was having a large number of infected sailors is not something which could have been kept secret anyway, especially while in port.  Not only that, but how do we know that Capt. Crozier did not write other memos through the regular chain of command before he wrote the one which became public?  After all, any such memos could very easily be classified and never made public.

Finally, I will admit that my sympathies are squarely with the man who placed the lives of his man and women above all else, and not with the bureaucratic drone who put procedures and ruffled feathers above the lives of sailors and called the real officer “stupid” for his actions (wait! a USN carrier captain stupid?!  Somehow I don’t think so…..).

At the time of writing (April 14th) there have been 600 sailors from the Theodore Roosevelt who contracted the virus and one death.

Finally, over 4000 sailors have now been evacuated from the ship (1000 are still onboard to operate the nuclear reactor and other key systems).

In other words, the USS Theodore Roosevelt is now completely inoperable!

The quoted CNN article concludes with:

Vice Chairman of the Joint Chiefs of Staff Gen. John Hyten told reporters Thursday the US military needed to plan for similar outbreaks in the future as the Defense Department works to cope with the virus’ impacts. “I think it’s not a good idea to think the Teddy Roosevelt is a one-of-a-kind issue. We have too many ships at sea, we have too many deployed capabilities. There’s 5,000 sailors on a nuclear-powered aircraft carrier. To think it will never happen again is not a good way to plan. What we have to do is figure out how to plan in these kind of Covid environments,” Hyten said.

Yet more proof that the USN never took a bioattack threat seriously.

To be honest, it seems that the US Army has similar problems, here is a map of affected US bases I found on Colonel Cassad’s blog: 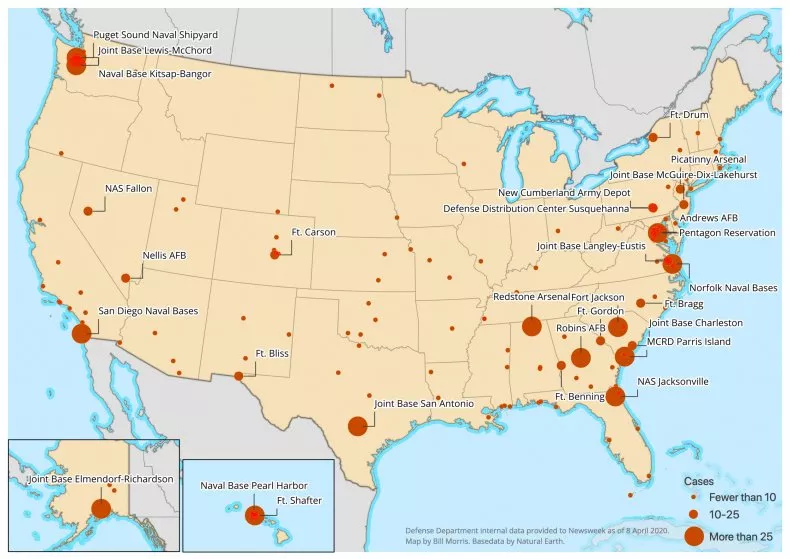 It appears that the US-based forces never expected any real attack (other than maybe one by terrorists equipped with small arms) so NBC security was never a priority.

[Sidebar: Note, in Russia, at least so far (April 14th), there are zero cases of servicemen infected with the virus.  This will almost inevitably change in the future, but for the time being, this is true, in spite of having Russian military units helping to fight the virus both in Russia and outside.  Just saying…]

However, this is not a fair comparison.  First, bases located on land have far more interactions with the outside world than ships, even ships in port.  Second, and much more importantly, in case of a pandemic or chemical/biological attack, bases located on land can better isolate those affected, bring in more resources or quickly disperse the personnel to better protect them.  You can’t do that on a ship.  In fact, the bigger the ship, the more it looks like an “armed cruiseliner” which, as we now all know, is a gigantic Petri dish.

Questions such as those above will only increase in number as the pandemic finally shed a much-needed light on the shocking reality about “the best! most powerful! best equipped! and best trained military force in the Galaxy!”: it can’t even protect itself from a relatively weak virus, never-mind defeat a competent enemy.

Will we get answers?  Eventually, probably yes.  But for the time being, the US is all about covering your ass while pointing fingers and blaming others (especially China, Russia and even the WHO!).  This strategy has been an abject failure for the past decades and it will be an abject failure in the future.

[Sidebar: Trump’s latest decision to defund the WHO (to whom the US already owes a ton of money anyway) is arguably his worst act of “international PR seppuku” which will further increase the disgust the USA already inspires worldwide.  As for our Israeli friends, they are proud that their Mossad actually steals medical equipment from other countries: after all, every Israeli know that Jewish blood is sacred, while goy blood is worthless.  Another case of self-inflicted “international PR seppuku” for “the only democracy in the Middle East”]

But since that is all US politicians know how to do, this is not stopping anytime soon.  Likewise, what is known as the “carrier fiction” will be upheld for as long as possible, especially since there is a lot of money involved for the US ruling classes.

Suspicion and Skepticism are Vaccines for Deception

NWO, Globalism and US “Leadership” – RIP

Go Forth and Multiply