Authored by David Rosenberg, chief economist with Gluskin Sheff + Associates Inc. and author of the daily economic newsletter Breakfast with Dave. First published in the Globe and Mail.

We are living in dangerous times.

Mostly, everyone I speak to lives in the here and now. They seem more interested in telling people how crazy cheap the stock market is and how crazy expensive the ‎Treasury market is, rather than trying to look at the current environment in a historical perspective. We are living through a period of history that will be written about in textbooks in years and decades to come, and the undertones are none too good.

Instead of telling people there is no recession, these bulls should be discussing why the markets are busy pricing one in. What do these pundits know that the markets don’t know? We have a bond market in which a quarter of the universe trades at a negative yield. The long bond yield has gone negative in Germany. More than half of the world’s bond market is trading below the Fed funds rate. Investment grade yields, on average, are below zero in the euro area.

This is completely abnormal because it reflects an abnormal economic, financial and political backdrop. Those who point to the stock market’s performance with glee, because of its V-shaped recovery, don’t bother telling you that in the past 12 months the total return is marginal in real terms and the best performing sectors are the ones you can only typically rely on in a deflationary recession – real estate, utilities and consumer staples.

One of the problems coming out of the most recent recession is that the global debt load is infinitely larger now than it was at the peak of that prior credit-bubble cycle. The world is awash in debt. Years of monetary intervention among the world’s central banks created artificial asset-price inflation and exacerbated wealth inequalities at the same time. Fiscal policy failed to arrest the increasingly wide income disparity, a global dilemma that has become acute in the United States. 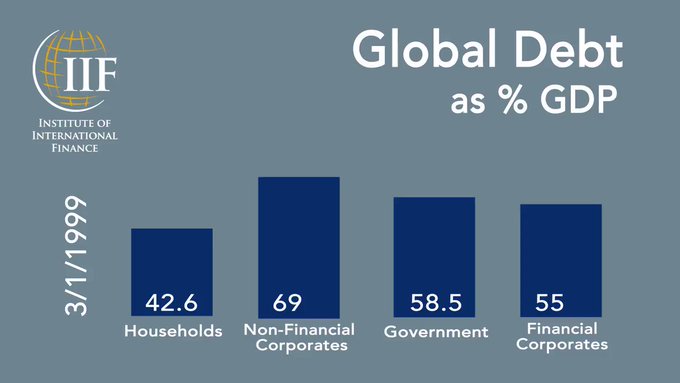 159 people are talking about this

At the same time, the accelerated pace of technological change has led to even greater obsolescence in the labour force. There is so much uncertainty that even at a five-decade-low, sub-4-per-cent headline unemployment, the U.S. working class is too nervous to ask for a pay hike. All the while, the immigrant and the foreign competitor is blamed for the woes, so it has been an easy time for brash populists to emerge as national leaders and tap into this anxiety.

This is a global phenomenon. The first sign that the centrists were heading into obscurity, along with that middle part of the political spectrum, was when Jeb Bush was forced to pull out of the 2016 GOP presidential primaries in the very early stages. The hate that filled that campaign has only managed to deepen – on both sides. The shootings this past weekend are a signpost of a society starting to come apart at the seams.

Meanwhile, the world is splintering. We have Brexit to contend with. There are deep divisions within the European Union; Italy may be next to depart. We have unstable situations in North Korea, a trade war between Japan and South Korea, and of course there is Iran. Out of nowhere, we also have these renewed tensions between India and Pakistan, as Indian Prime Minister Narendra Modi has chosen a very nationalistic route since his election victory. And the situation in Hong Kong bears watching – especially if the peg with the U.S. dollar ever comes into question. Then we have this trade, currency and economic war between the United States and China – with no side willing, or perhaps able, to back down at this point.

All the while, central banks are being pushed into easing action. For the first time since the 1930s, a Federal Reserve tightening cycle got stopped out at 2.5 per cent on the federal-funds rate.

We have long duration yields going negative, as discussed above. Debt dynamics are very unstable and likely why interest rates have to go down – but if they are negative, how do assets with cash-flow streams get valued? The distortions are wild. All the while, gold prices have broken out in recent months in all currency terms and central banks are adding bullion to their reserves.

And we have a Fed that’s doing little more than sow confusion. Fed chair Jerome Powell did a “pivot” with his messaging as long ago as January, but didn’t start to act until July. After sounding very dovish at his semi-annual congressional testimony, he walked that sentiment back at the following meeting, saying this wasn’t going to be an easing cycle. Why on Earth would he say that? Meanwhile, we have had at least one dissent at each of the past two Federal Open Market Committee meetings, and half of the central bank is dovish and half is hawkish. We have a Fed chair who seems to change his mind constantly and who also is being badgered by U.S. President Donald Trump relentlessly.

This is also a President who has attempted to exert pressure on the Fed right out in the open, and who has blatantly attempted to verbally weaken the U.S. dollar, which makes no sense considering he simultaneously jeopardizes its status as the world’s reserve currency. Beyond the deep social and political divisions in the U.S., we have the rising tide of nationalism and protectionism.

What we took for granted in the post-Marshall Plan/Bretton Woods experience was the unusually high degree of world co-ordination and integration. It wasn’t perfect, but it engineered an unprecedented period of global ‎stability. And unless somehow the political leadership vacuum is filled, and filled fast, we are on a slippery slope. The gains of the past 70 years, in which the world became smaller and worked together to make it a better place, are at risk. It was an era of relative stability that we all know, having lived it. But keep in mind it was also a grand experiment – and now the ugliness of hate, blame, mistruths, nationalism and populism have staged a revival. Mr. Trump, Mr. Modi and Britain’s Boris Johnson are symbols of this, not the cause.

To cap off, look at all the information at our disposal. Gold prices surging. Bond yields plunging. Central banks in a confused state. The breakdown of the world order. Here we have a trade and currency war going on between the world’s two dominant powers – with no end-game in sight.

Think about what I am describing – gold soaring, bonds rallying sharply, an equity market rolling off the highs, deepening racism, and a tariff and currency war.

This sounds a lot like the 1930s to me. Back then it became a real war that cost millions of lives. This war won’t cost lives, but it will cost livelihoods.

Most important – be as liquid as possible for the next several months.