The Hong Kong/China feud is going from bad to worse on Monday, when as reported earlier, the Hong Kong airport authority advised all passengers to leave the terminal buildings as soon as possible in an unprecedented disruption after thousands of anti-government protesters occupied the airport terminal building.

#BREAKING: Hong Kong airport authority says all passengers are advised to leave the terminal buildings as soon as possible https://twitter.com/AmichaiStein1/status/1160828603971620864 … 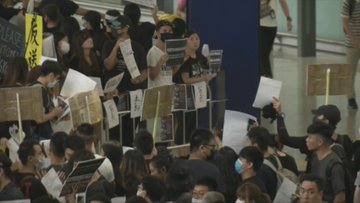 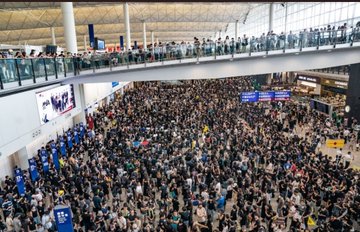 46 people are talking about this

However, what confirmed that as Beijing has been warning for the past week, Hong Kong’s insubordination will no longer be tolerated by Beijing, was a video – complete with dramatic World War III style music – published by the state-owned tabloid Global Times, which showed “The People’s Armed Police have been assembling in Shenzhen, a city bordering Hong Kong, in advance of apparent large-scale exercises.”

Global Times’ prolific – and trolling – Editor in Chief, Hu Xijin naturally chimed in on twitter, pointing out that Hong Kong Airport canceled all remaining flights Mon afternoon due to illegal assembly and noting that while the “Central government still exercises restraints, and respects HK’s high-degree of autonomy under one country, two systems. But I have an intuition riots won’t be allowed to keep on like this.”

Hong Kong Airport canceled all remaining flights Mon afternoon due to illegal assembly. Central government still exercises restraints, and respects HK’s high-degree of autonomy under one country, two systems. But I have an intuition riots won’t be allowed to keep on like this.

177 people are talking about this

And the icing on the cake: CNN’s Will Ripley reporting that Chinese media published a new video of the country’s military run armed police assembling  in the city of Shenzen, which borders Hong Kong, ahead of “large-scale exercises.” As Ripley adds, “Chinese law authorizes the use of the People’s Armed Police (PAP) to “handle riots, unrest, severe violent criminal activities, terrorist attacks and other public safety incidents.”

#breaking Chinese media published a new video of the country’s military run armed police assembling  in the city of Shenzen, which borders Hong Kong, ahead of “large-scale exercises.”

60 people are talking about this

So will China invade Hong Kong and potentially trigger a global war as the west has no choice but to come to the wayward territory’s defense? We will find out, but recall what what Steve “the Big Short” Eisman said last week, who said that his biggest fear right now are the Hong Kong protests, warning that “the people who are protesting are not backing down, the Chinese government doesn’t seem to be backing down, so if cooler heads don’t prevail it’s possible things in Hong Kong could get very ugly” and adding that “That’s actually what I’m worried about the most right now, because every weekend we’ve got this drama where the people of Hong Kong are having protests in the millions and its starting to get very violent.”

If The Saudi Arabia Situation Doesn’t Worry You, You’re Not Paying Attention