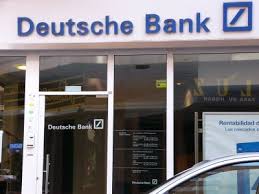 This is a chart we have been presenting since last year, updated periodically, showing just how vast Deutsche Bank’s potential undercapitalization is/would be if, as in the case of Lehman, for some reason gross exposure suddenly became net, and there was counterparty failure. It is also the reason why we predicted as recently as last month when Deutsche announced it would issue another €1.5 billion in Tier 1 capital, that the German megabank’s capital raising is far from over.

Sure enough, just out from Bloomberg:

Who will buy the shares?

The planned capital increase will consist of Deutsche Bank issuing a total of 360 million new shares, the person said. A single strategic investor has agreed to buy 60 million of the shares with the remainder sold to investors via a so-called rights offering, this person said. The rights offering is fully underwritten, meaning investment banks have agreed to buy any shares that investors don’t purchase.

And the punchline: Bank’s new shares may be sold with 25%-30% discount.

In other words, it is liquidity scramble time, and the bank is willing to give anyone with deep enough pockets a 30% discount to market price just to get some additional short-term funding.

Why the scramble, especially if Europe is, as eurocrats, lying central bankers and conflicted pseudo-intellectuals like to claim “fixed?” We can’t wait to find out although something tells us that the official version, that “the move is expected to boost a key gauge of the bank’s
financial strength, its core Tier 1 level, to at least 11.5% of its
risk-adjusted assets, compared with 9.5% now” is merely the latest lie out of a continent where contrary to intentions, the ECB’s annual stress test confirms banks are in worse shape than ever. Which, as Marathon CEO Bruce Richards, who during the SALT Las Vegas conference last week estimated European banks’ equity shortfall to be around $800 billion, is perfectly understandable.

Additionally, Deutsche Bank today reaffirmed its commitment to Strategy 2015+ and is providing updated financial aspirations and further details of an accelerated growth strategy.

The capital measures will increase the Common Equity Tier 1 (CET1) ratio by approximately 230 basis points from 9.5% at the end of the first quarter 2014 to 11.8% on a pro forma CRD4 fully-loaded basis. This increase follows significant strengthening of this ratio, which stood below 6% in mid 2012, under Strategy 2015+. These measures will substantially increase the Bank’s capital ratio, provide a buffer for future regulatory requirements, and support targeted business growth.

Deutsche Bank placed approximately 60 million shares at a price of EUR 29.20 per share with Paramount Holdings Services Ltd., an investment vehicle owned and controlled by His Excellency Sheikh Hamad Bin Jassim Bin Jabor Al-Thani of Qatar, who intends to remain an anchor investor in Deutsche Bank.

Additionally, through the rights issue, Deutsche Bank expects to issue up to 300 million new shares. The rights offering will be led by Deutsche Bank as global coordinator and bookrunner. A syndicate of banks have agreed to a firm underwriting of the new shares.

The Bank reaffirmed its commitment to implementing Strategy 2015+, which has so far generated  more than 350 basis points of CET1 capital ratio increase on a pro forma CRD4 fully-loaded basis, some EUR 360 billion of CRD4 exposure reductions, and EUR 2.3 billion of cumulative cost savings from the Bank’s Operational Excellence Programme (OpEx) in less than two years.

The package of measures announced today reinforces Strategy 2015+ by enabling Deutsche Bank to address challenging operating conditions. These include tighter regulatory requirements, the increased cost of compliance and litigation, and headwinds in the macro-economic environment. These measures also enable the Bank to invest in growth opportunities in its core businesses arising from improved dynamics in the competitive environment.

An analyst call will take place on Monday, 19 May 2014 at 8.00 a.m. (CET). This conference call will be transmitted via internet: https://www.db.com/ir/en/content/capital_increase_2014.htm