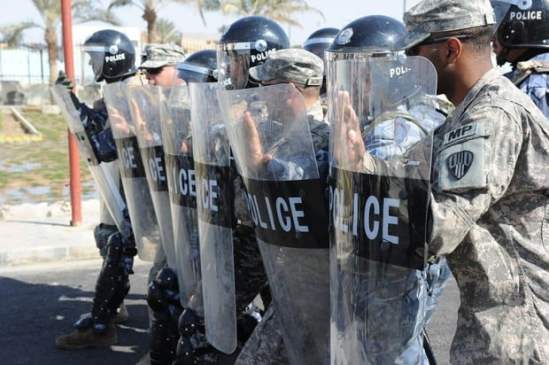 Police and military units have trained under Homeland Security and FEMA supervision to quell riots and suppress civil unrest… effectively, our delicate future is inevitably headed towards martial law.

This article was written by Amy S. and originally published by PrepperFortress.

Editor’s Note: This one comes from PrepperFortress, pointing out the behind-the-scenes maneuvers that are building up the next wave of crisis potential with flashpoints in the next administration.

Before that transition happens, Homeland Security and FEMA are meeting behind the scenes to prepare emergency response during events that may well include economic collapse, civil unrest, rioting, violence protests and demonstrations, clashes with police, natural disasters, man-made weather events, world war or attack on U.S. soil, cyber attack on the grid or communications and terrorism in many forms.

The response by the system under any future president – unless certain powers are revoked, and the law is reformed – will be martial law. Paramilitary unites affiliated with numerous agencies are preparing right now to take down citizens, prevent uprisings and restore power to the continuity of government by any means necessary – right or wrong, provocation or real events.

That is incredibly dangerous as the future of this nation tends towards economic ruin, deep social divisions and instability on every front. The facts won’t matter after the takeover is underway, and patriots are already marked as potential domestic terrorists, and will be picked-up preemptively.

This Video is about that Federal Emergency Management Agency (FEMA) issued a Notice of Funding Opportunities (NOFO) for fiscal year 2017. Such Notice is to Prepare Communities for Complex Coordinated Terrorist Attacks (CCTA Program). The CCTA Program will provide close to $36 million to state, local, tribal, and territorial jurisdictions to improve their ability to prepare for, prevent, and respond to “complex coordinated terrorist attacks” — in collaboration with the whole community.

This Video is about that Selected state, local, tribal, and territorial jurisdictions will receive fiscal 2016 CCTA Program funding specifically to build and sustain capabilities according to these qualifications: Economic Collapse Video…

To enhance their preparedness for these supposed “complex coordinated terrorist attacks,” here is what they are looking to achieve.

3. Training to implement plans and procedures

— The Department of Homeland Obama Martial law, Fema  2017,Obama martial law dollar collapse 2017, Security (DHS), per the Appropriations Act of 2016, has been funding and allocating for the use of state police crime labs, fusion centers, and other means and methods necessary… in order to “analyze” any information they collect, from both public and private sectors. As Obama’s administration continues to creep closer and closer to tyranny, one could only imagine how far he’d go before Americans started to revolt.

We all know, Obama is working all hours of the day to try and disarm as much of the population as possible, and although he claims it in the name of American safety, many U.S. citizens know otherwise. But if it were to come to a point where Americans needed to be suppressed in order for the preservation of Obama’s reign to prevail, what would he do?“

This article was written by Amy S. and originally published by PrepperFortress.

The Prepper’s Blueprint: The Step-By-Step Guide To Help You Through Any Disaster

This Is The Dawn of Civil Unrest: A Checklist for Preppers To “Ride Out the Storm”

Hunkering Down in “Secure, Safe Rooms Hidden in Plain Sight”

Strategic Relocation Guide: How To Position Yourself To Survive A Major TEOTWAWKI Event

Gold Bugs Rejoice – Central Banks Think You’re On To Something

John Rubino: Taking Control Of The Time In Which We Live