It’s that time of year again. It’s open enrollment for health plans at my employer. They are biggest employer in Philly and have the most leverage possible with the insurance companies. They have such good leverage that my premiums are going up “only” 9.8% this year for a basic HMO plan. Based on what I hear from others, I should be thankful for just a 9.8% increase.

This isn’t a new development. Since I’ve been tracking all my expenditures using Quicken since 1991, I know exactly what my annual health insurance costs have been every year. Obamacare was passed in 2009 and began to be implemented in 2010. Obama declared that families could expect $2,500 of savings per year. I know for a fact my annual medical expenses were $2,000 higher in 2015 than they were in 2010.

The lies of the government and their minions at the BLS are revealed to anyone who cares to open their eyes. The BLS reported inflation rates for health insurance since 2010 is beyond laughable. They must have triple seasonally adjusted, massaged, and tweaked these figures to arrive at the absurdly false inflation figures they are feeding to the sheeple. These are the reported inflation figures for health insurance since 2010:

According to the BLS, and built into their CPI calculation, your health insurance premiums have gone up by about 16% over the last six years. Now for the smell test. I have worked for a large employer with excellent healthcare benefits over that entire time span. My health insurance premiums have risen by 65% since Obamacare was passed. And that doesn’t capture the whole picture.

In case you weren’t paying attention, the BEA reported the latest GDP lie yesterday. According to these government drones, the economy grew by a whopping 0.5% in the first quarter. As you may or may not know, this figure is adjusted for inflation. Our beloved BLS propagandists assure us that inflation has been running at a microscopic 0.9% over the last twelve months. Does anyone who is not a halfwit or Ivy League educated economist actually believe that tripe?

The utter falsehood of the BLS presented inflation statistics is clearly apparent in the comparison between what is happening in the real world of housing versus their excel spreadsheet models. The BLS declares rents are rising at a 3.2% annual rate. In the real world they are rising at an 8% annual rate. There appears to be a slight discrepancy. Do you think the market is lying or the government? The average monthly rent is now $870, an all-time high – up 24% since 2012. The BLS says rents are only up 10.8% since 2012. Do you believe your landlord or the BLS?

The ridiculously conceived owners equivalent rent is supposed to capture home price inflation. This BLS rigged black box also accounts for the largest single weighting in the CPI calculation. Nothing like a made up number to give the BLS the most ability to manipulate the truth. The Case Shiller home price index, based upon real prices in real markets shows that home prices are up 22.7% since 2012 due to the Federal Reserve/Wall Street scheme/scam. You have the government/establishment artificially jacking up home prices to fix the Wall Street balance sheets and then you have the government drones falsifying inflation data to show home prices only going up by 10% since 2012.

You have the government agency tasked with reporting accurate inflation data under-reporting rent and home price inflation by over 100%. Not exactly a rounding error. And the list goes on. In the real world of gas prices, we’ve seen a 30% increase in the price to fill up our vehicles since February. According to our fantasy loving friends at the BLS, gas prices have fallen by 10.8% over this time frame. Could they be a bigger joke? 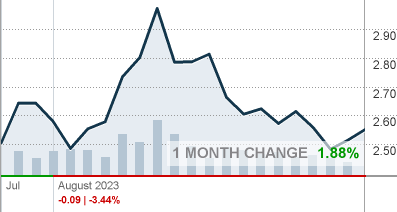 Aren’t you glad none of your clothes are made of cotton?

According to the Bureau of Lies & Scams food prices have not risen one penny in the last three months. Over the last year they report a barely evident 0.8% increase in food prices. I find that quite amusing, as I do the regular grocery shopping in our house and I do not see flat food prices. Even with cutting out overpriced beef, my weekly grocery bill is at least 5% higher than last year. The real world prices of some major food items below, blows a hole in the fake data being presented by the BLS.

I don’t know about the rest of the world, but food, housing, gasoline, utilities, and healthcare make up a huge portion of my budget. And those prices are rising at a 5% to 10% clip on an annual basis today. Janet Yellen is worried about deflation and is keeping interest rates near 0%. Is she lying or is she really that stupid and disconnected from the real world? I’d suggest we follow George Carlin’s advice.

The End of Dollar Dominance?

Lynette Zang: ‘The CRIMINAL BANKS Know Something Is VERY WRONG’

Obama Declares War On ‘Extremism’ – Are You An ‘Extremist’ According To His Definition?