Israeli strikes have hit an arms depot operated by the Lebanese Hezbollah group near Damascus airport, Syrian opposition sources told Al Jazeera. Witnesses said a total of five strikes occurred near the Damascus airport road, about 25km from the capital, early on Thursday. Syrian state TV quoted a military source saying rockets fired from Israeli territory targeted a military area in the southwestern part of the airport which caused explosions.

“We do understand that the Israelis have been carrying out strikes in the past. The last one was in January targeting the Mezze military base.

“In 2015 they also launched attacks near the capital Damascus and in the Golan Heights, killing two prominent Hezbollah commanders, including Jihad Mughniya who is the son of the top military commander of Hezbollah Imad Mughniya who was also killed in Damascus in 2008,” Ahelbarra said.

Israeli Intelligence Minister Israel Katz, speaking from the United States where he has been meeting US officials, told Israeli Army Radio: “I can confirm that the incident in Syria corresponds completely with Israel’s policy to act to prevent Iran’s smuggling of advanced weapons via Syria to Hezbollah … Naturally, I don’t want to elaborate on this.

“The prime minister has said that whenever we receive intelligence that indicated an intention to transfer advanced weapons to Hezbollah, we will act.” Katz added. An Israeli military spokeswoman declined to comment.

Reuters news agency, citing an intelligence source, said the depot that was targeted handles a significant amount of weapons that Tehran, a major regional ally of Syrian President Bashar al-Assad, sends regularly by air. The source said the arms depot gets a major part of the weapons supplied to an array of Iranian backed armed groups, led by Hezbollah, which have thousands of fighters engaged in battle against Syrian rebels.

Rami Abdurrahman, head of the UK-based Syrian Observatory for Human Rights, said the blasts were heard across the capital, jolting residents awake. Activist-operated Diary of a Mortar, which reports from Damascus, said the explosions near the airport road were followed by flames rising above the area. 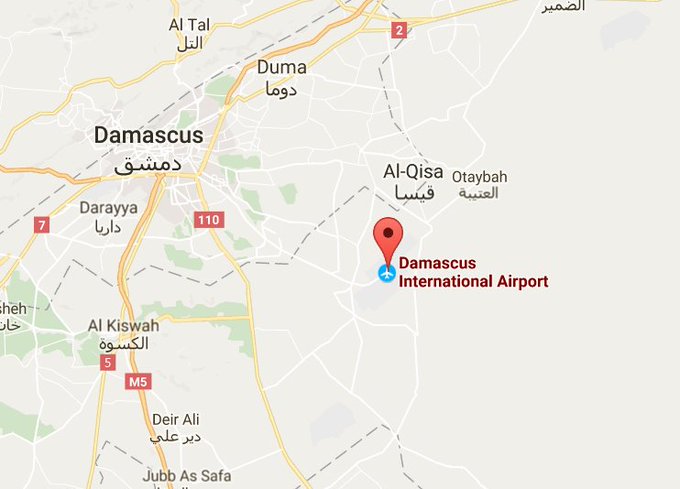 #Syria #Damascus Bunch of #Syrian Activist Saying a Huge Explosion from the countryside Shaked #Damascus. & No Info on what it was yet

#Syria #Damascus A #Syrian Reporter is now Saying the Sound of HUGE EXPLOSION came from Vicinity of Damascus International Airport.

This is the second Israeli attack on Syria in the past week: on Sunday, Israeli forces bombed a camp for pro-government forces killed three fighters near the Golan Heights on Sunday according to AFP. Two fighters were also wounded in the attack on the Al-Fawwar camp near Quneitra in southwestern Syria, adding that it was unclear whether the damage was inflicted by an air strike or shelling.

Israel’s army declined to comment Sunday on the attack. On Friday the army said it targeted positions inside Syria in retaliation for mortar fire that hit the northern part of the Golan Heights.

Syria’s official news agency SANA said Israel had struck a Syrian army position in the province of Quneitra on the Golan plateau, “causing damage”. The Syrian government labels rebel groups and jihadists fighting the regime as “terrorists” and accuses Israel of backing them.

One thing is certain: the party behind today’s attack on Syria was not the US – otherwise CNN would be blasting it in real time – although with Russia having withdrawn half of its warplanes and with the Syrian army eager to avoid further airborne confronations, it is easy to imagine why the IDF can now enter the sovereign territory unopposed and without fear of reprisals.

These Powder Kegs Are About To Blow: “Trump Needs To Halt The Downward Spiral That Obama Orchestrated”

Can the EU Become a Partner for Russia?

US Secrets, Lies and Confusion in the North of Syria