To our complete ‘shock,’ a federal judge in San Francisco has just blocked Trump’s Executive Order intended to withhold funding from communities that limit cooperation with U.S. immigration authorities.  The basis of the finding is that only Congress, not the president, has authority to attach new conditions to federal spending.

“The Constitution vests the spending powers in Congress, not the President, so the Order cannot constitutionally place new conditions on federal funds. Further, the Tenth Amendment requires that conditions on federal funds be unambiguous and timely made; that they  bear some relation to the funds at issue; and that the total financial incentive not be coercive. Federal funding that bears no meaningful relationship to immigration enforcement cannot be threatened merely because a jurisdiction chooses an immigration enforcement strategy of which the President disapproves.”

U.S. District Judge William Orrick, an Obama appointee, issued the temporary ruling moments ago after San Francisco and Santa Clara County argued that it threatened billions of dollars in federal funding. The decision will stay in place while the lawsuit moves through court.

Ironically, an attorney for the Justice Department, Chad Readler, downplayed the usefulness of the Executive Order admitting at a recent court hearing that it only applied to three Justice Department and Homeland Security Department grants that amounted to less than $1 million nationally and possibly no San Francisco funding at all.

Meanwhile, for the first time we learn that the DOJ, at oral argument, also contended the sanctuary cities EO was toothless–merely an exercise of Trump’s “bully pulpit” to “encourage communities and states to comply with the law.” 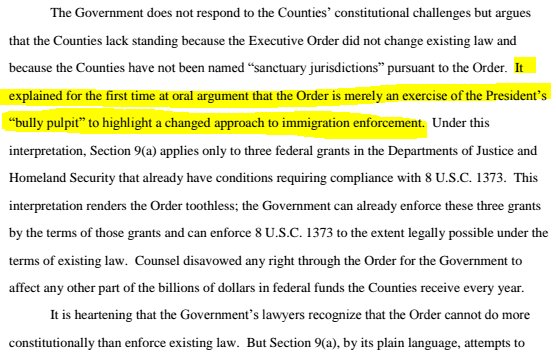 But, Judge Orrick disagreed with the scope of the Executive Order saying that it attempts to “to reach all federal grants, not merely the three mentioned at the hearing.”

It is heartening that the Government’s lawyers recognize that the Order cannot do more constitutionally than enforce existing law. But Section 9(a), by its plain language, attempts to  reach all federal grants, not merely the three mentioned at the hearing. The rest of the Order is  broader still, addressing all federal funding. And if there was doubt about the scope of the Order, the President and Attorney General have erased it with their public comments. The President has called it “a weapon” to use against jurisdictions that disagree with his preferred policies of immigration enforcement, and his press secretary has reiterated that the President intends to ensure that “counties and other institutions that remain sanctuary cites don’t get federal government funding in compliance with the executive order.” The Attorney General has warned that  jurisdictions that do not comply with Section 1373 would suffer “withholding grants, termination of grants, and disbarment or ineligibility for future grants,” and the “claw back” of any funds previously awarded. Section 9(a) is not reasonably susceptible to the new, narrow interpretation offered at the hearing.

…and apparently Judge Orrick didn’t think the DOJ’s arguments were even “legally plausible.”

So, if the DOJ believes that the scope of the Executive Order would only impact $1mm in federal funding and was “merely an exercise of Trump’s ‘bully pulpit’, then we have to wonder whether the whole thing was just a charade to avoid more “flip-flopping” accusations?  What say you?

Here is the full order: