The second debate among Democratic hopefuls was notable for two things. The lack of common decency of most of them and Tulsi Gabbard’s immense, career-ending attack on Kamala Harris’ (D-Deep State) record as an Attorney General in California.

Harris came out of the first debate the clear winner and Gabbard cut her down to size with one of the single best minutes of political television since Donald Trump told Hillary Clinton, “Because you’d be in jail.”

Gabbard’s takedown of Harris was so spot on and her closing statement about the irresponsible nature of the Trump Administration’s foreign policy was so powerful she had to be actively suppressed on Twitter.

And, within minutes of the debate ending the media and the political machines moved into overdrive to smear her as a Russian agent, an Assad apologist and a favorite of the alt-right.

Now, folks, let me tell you something. I write and talk about Gabbard a lot and those to the right of me are really skeptical of her being some kind of plant for Israel or the establishment. If she were truly one of those she wouldn’t have been polling at 1% going into that debate.

She would have been promoted as Harris’ strongest competition and served up for Harris to co-opt.

That is not what happened.

No, the fact that Gabbard is being smeared as viciously and baselessly as she is by all the right people on both the left and the right is all the proof you need that she is 1) the real deal and 2) they are scared of her.

When Lindsey Graham tweets about Tulsi Gabbard twice after a debate, when the Washington Post neocons like Josh Rogin are attacking her, you know she’s got their panties in a bunch.

You expect it from the Harris camp, obviously. But when it comes directly from people like Navid Jamali (double agent, navy intelligence, MSNBC contributor) you know the empire is beginning to get worried.

Like Jill Stein and Donald Trump, Gabbard is counting on Russian support. This is why she won’t criticize Assad. This is what we’ve become. An election rife with foreign influence. This is how they attack our election security, not by hacking, but by doing this. https://twitter.com/jamilsmith/status/1156832983875067904 …

This is @TulsiGabbard responding when Anderson Cooper brought up the Harris rebuke about Assad. She defends meeting with him, but watch how she reacts when Cooper asks her whether she considers Assad a “torturer or a murderer.” Her answer is disqualifying. 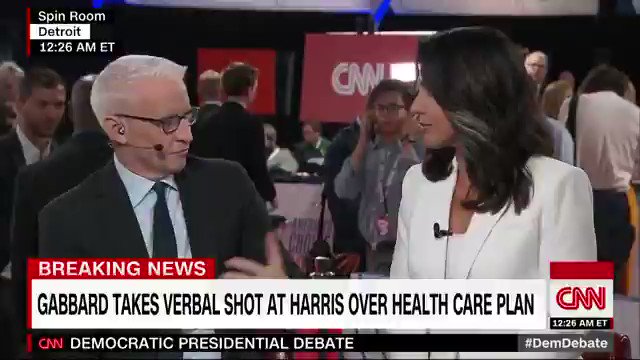 Gabbard is now getting the Ron Paul treatment. It will only intensify from here. They will come after her with everything they have.

In the past week she’s destroyed Kamala Harris on national TV, sued Google for electioneering and signed onto Thomas Massie’s (R-KY) bill to audit the Federal Reserve. What does she do next week, end the Drug War?

Tulsi Gabbard is admittedly a work in progress. But what I see in her is something that has the potential to be very special. She’s young enough to be both passionately brave and willing to go where the truth takes her.

And that truth has taken her where Democrats have feared to tread for more than forty years: the US Empire.

The entire time I was growing up the prevailing wisdom was Social Security was the third rail of US politics. That, like so many other pearls of wisdom, was nonsense.

The true third rail of US politics is empire. Any candidate that is publicly against the empire is the enemy of not only the state, it’s quislings in the media, the corporations who profit from it and the party machines of both the GOP and the DNC.

That is Gabbard’s crime. And it’s the only crime that matters.

When the Empire is on the line, left and right in the US close ranks and unite against the threat. The good news is that all they have is their pathetic Russia bashing and appeals to their authority on foreign policy.

Foreign policy, by the way, that most people in America, frankly, despise.

And the response to her performance at the second debate was as predictable as the sun rising in the east. It’s also easily countered. Gabbard will face an uphill battle from here and we’ll find out in the coming weeks just how deep into Trump Derangement Syndrome the average Democrat voter is.

If she doesn’t begin climbing in the polls then the Democrats are lost. They will have signed onto crazy Progressivism and more Empire in their lust to destroy Donald Trump. But they will lose because only a principled anti-imperialist like Gabbard can push Trump back to his days when he was the outsider in the GOP debates, railing against our stupid foreign policy.

No one else in the field would be remotely credible on this point. It’s the area where Trump is the weakest. He’s not weak on women’s rights, racism, gay rights or any of the rest of the idiotic identity politics of the rest of the Democratic field.

He’s weakest on the one issue that got him elected in the first place, foreign policy. Hillary was the candidate of Empire. Trump was not. It’s why we saw an international conspiracy formed to destroy him and his presidency. Now that same apparatus is mobilized against Tulsi Gabbard.

That’s good. As a solider she knows that when you’re taking flak you are over your target. Now let’s hope she’s capable of sustaining herself to push this election cycle away from the insanity the elite want to distract us with and make it about the only thing keeping the world from healing, ending the empire of chaos.

Swalwell a Major Contender for U.S. Presidency in 2020

Politics As Usual Is Dead