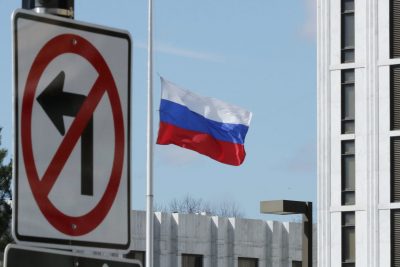 Why a new Cold War? Why now? This morning, Americans awoke to news that the supposedly Russia-supplicant Trump administration, along with 14 other EU nations, will expel scores of Russian diplomats. The announcement, which Russia called a “provocative gesture,” and vowed to retaliate against, constitutes the largest collective expulsion of Russian Intel officers in history.

This very serious action follows on the heels of Russian intelligence’s alleged role in the nerve-agent-attack – which Russia denies – on Sergei Skripal and his daughterYulia, on UK soil. Maybe Russia was behind the attack, maybe it wasn’t; but, it seems, we’d want to be sure and have indisputable evidence before embarking on what the Russian foreign ministry correctly labeled “a confrontational path.”

More alarmingly, Russia’s neighbors, Poland, Latvia, and Lithuania, withdrew their ambassadors from Moscow on Monday – a move all but tantamount to breaking off diplomatic relations. With US and NATO troops now forward deployed in these former Warsaw Pact states, Russian and US military personnel staring each other down across the Euphrates River, and US airstrikes having recently killed scores of Russian mercenaries in Syria, are we now on a path to Cold (or Hot!) War?

Look, maybe Russia is behind these attacks, maybe all the MSNBC-Russia-Gate-Hysteria is all justified. But isn’t this hasty, serious action a bit premature? Don’t we want to be sure? As for the 2016 elections, Mueller’s investigation is not yet complete and when it comes to “collusion” there’s plenty of smoke, maybe, but very little fire. As for the UK poisoning attack, despite Britain’s consistent, confident allegations of Russian guilt, the Organization for the Prohibition of Chemical Weapons (OPCW) won’t even have the substance test results back for some 2-3 weeks.

It seems likely that rather than prudently, patiently (you know…diplomatically!) waiting for definitive, corroborating chemical and intelligence evidence before further escalating tensions with the Russian bear, what we’re seeing is President Trump’s team making a political move. Embattled and scandal-ridden – who else saw 60 Minutes last night – this administration likely feels compelled to take some drastic action to prove (again) that they’re not in cahoots with Putin. Is that any way to run foreign policy? Well, it is, in this era of hyper-partisan, role-swapping (wait the Dems are Russia hawks now?!?), battle stations politicization!

I watch the news (CNN and MSNBC are the worst culprits) enough to know that it is currently all-Russia, all the time. The American public is led to believe, by those outside, and in some cases – like the National Defense Strategy (NDS) – inside, the administration, that Russia is a born again Soviet Union and Putin the new Stalin incarnate. The Russkies are out for world domination again, a “revisionist power” as the NDS labels them. Hold on though; take a breath. Is that actually true?

As I’ve written in these pages, the threat and supposedly malign intentions of Russia and China have been highly inflated by hawks on both sides of the political aisle. In fact, Russia has recently announced plans to cut military spending over the next five years. As it stands, Russia is in many ways punching above its weight to begin with. With an economy comparable in size to that of Spain or Italy, military spending just a fraction of the US, and facing a demographic “perfect storm” of high mortality and low fertility, Russia has neither the means nor motivation to conquer Central Europe.

The United States, on the other hand, spends more on its military than the next several nations – China, Russia, India, Germany, Saudi Arabia, the UK, Japan and France – combined. Furthermore, a majority of the recent $1.3 trillion US omnibus spending bill goes straight to the warfare (welfare) state – the military and VA. Who exactly holds the aggressive cards here?

None of that proves Russia is innocent. None of this means the US and EU should appease every Russian move or irredentist motive. None of it implies the Russians shouldn’t be monitored, balanced, and carefully watched in Europe and the Caucasus. However, before unilaterally escalating an already alarmingly tense situation between NATO and Russia, shouldn’t we at least wait until all the evidence is in?

Prudence not politics should be the name of the game.

Major Danny Sjursen, a regular AntiWar.com contributor, is a U.S. Army officer and former history instructor at West Point. He served tours with reconnaissance units in Iraq and Afghanistan. He has written a memoir and critical analysis of the Iraq War, Ghost Riders of Baghdad: Soldiers, Civilians, and the Myth of the Surge.He lives with his wife and four sons in Lawrence, Kansas. Follow him on Twitter at @SkepticalVet and check out his new podcast “Fortress on a Hill,” co-hosted with fellow vet Chris ‘Henri’ Henrikson.

Featured image is from Politico.

The original source of this article is Antiwar.com
Copyright © Major Danny Sjursen, Antiwar.com, 2018
Share this...