We may not know for a fact who will win the US election, but what we do know is that the Credit Cycle has turned. This will turn out to be more important in the near term, once the expected US Election market gyrations have subsided!

It’s time for investors to refocus on the banks who live via the credit cycle, and specifically the troubled EU Banking sector.

When the Credit Cycle turns, those banks most over-extended always “pay the piper”!

Problem banks are spread right across the Eurozone. Most in the financial media are presently focused on Deutsche Bank, as Angela Merkel currently claims they won’t get “bailed out”.  No doubt the markets will force her to change her mind even if she was to stay in power in 2017. You can be assured that DB will get “bailed out”.

It’s some of the lesser well known banks which are now the scariest.

EU STOXX 600 BANK INDEX AT TREND LINE SUPPORT GOING BACK TO THE INITIATION OF THE EU CONCEPT IN LATE 80’S!

Some  analysts expect another STOXX 600 Bank Index down-leg of a similar magnitude to the initial down-leg from last July (~228) into the February low (~130). That decline equated to approximately 43%. Thus, a similar sized decline from the recent high might bring prices down below the 90 level, or some 31% below current levels and approaching the all time lows of 79.

Switzerland’s Credit Suisse is one of them. The constituency to get them “bailed out” is not nearly as powerful. They are going to be a big problem.

Or it could be Italy’s UniCredit or Spain’s Banco Popular, whose demise could infect the bigger banks who hold humongous derivatives exposure.

The election and other matters have put the massive problems at the banks on the back burner. And it has certainly helped to have a distracting rally in the banking shares since the September lows. But forgetting about them would be a mistake. They are about to become headline news again, regardless of the election outcome.

The credit metrics are telling us this!

BANKS ARE WORRIED ABOUT SOMETHING!

Three-month LIBOR rates – the European benchmark cost of short-term borrowing for the international system – has tripled this year to 0.88% as inflation worries are mounting.

Something more fundamental is at work. The cost of global capital is going up, full stop
Steen Jakobsen, Saxo Bank

“The LIBOR rate is one of few instruments left that still moves freely and is priced by market forces. It is effectively telling us that the Fed is already two hikes behind the curve,” said Steen Jakobsen from Saxo Bank.

“This is highly significant and is our number one concern. Our allocation model is now 100% in cash. This is a warning signal for the market and it happens extremely rarely,” he said.

The Bank for International Settlements warns that the rising cost of borrowing in dollar markets is transmitted almost instantly through the global credit system.

Credit analysts are becoming nervous about the spread between LIBOR and the overnight index swap,  the so-called LIBOR-OIS spread that is used to gauge problems in the plumbing of  the credit system. It has widened to near levels seen in the eurozone debt crisis and past bouts of stress. 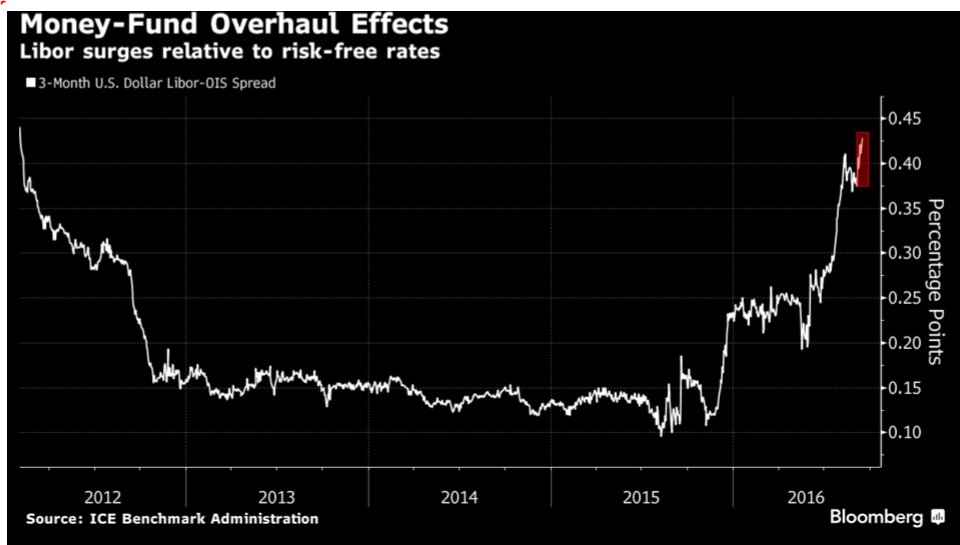 THE DEUTSCHE BANK PROBLEM IS FAR FROM RESOLVED

The Deutsche Bank problem has not gone away this easily by laying off another 10,000 to reduce their employment by 20%.. It has only been shoved from the headlines as US Elections dominate. It will soon be back with a vengeance because of its Derivatives exposure as a result of increasing interest rates.  As Jeff Gundlach recently explained, the market will keep pushing the price of DB lower until it either fails, or is bailed out!

Deutsche Bank is currently assessed as globally the most systemically important bank. A dubious honor.

In our opinion it is not so much funding issues but ratherderivatives exposures that more likely to trouble markets going forward if Deutsche Bank concerns continue.

This is especially true if these concerns propagate into a confidence crisis inducing more rapid unwinding of derivative contracts.

As we have detailed previously, Deutsche has the world’s largest so-called derivatives book—its portfolio of financial contracts based on the value of other assets. As Forbes notes, it peaked at over $75 trillion, about 20 times German GDP, but had shrunk to around $46 trillion by the end of last year. That’s around 12% of the total notional value of derivatives outstanding worldwide ($384 trillion), according to the Bank for International Settlements.

As a reminder, if the liquidity run forces DB to start unwinding or being forced to novate derivatives, it could get ugly.

JPMorgan bank analysts confirm the size of DB’s book, and note that BIS data provide an alternative but indirect way to gauge the size of derivatives exposures. According to BIS data the exposure of foreign banks to German counterparties via derivatives contracts stood at $312bn as of Q1 2016.

.. any problems at Deutsche Bank will immediately have broad reaching impact. Even further hints of more problems might be enough to light a derivatives ‘match’.

We can likely expect the EU banking situation to turn chaotic after the US Elections as the December 4th Italian Referendum looms which heightens worries within an already unstable Italian Banking situation.

Democracy Is a Front for Central Bank Rule

The Cashless Society Is Going to Backfire for the Establishment

Fed Throws Gas On Already Raging Financial Inferno: “We’ll Have One Disaster After Another”