With curious timing, the mainstream media machine is promoting the former First Lady as celebrity, rock star and saint with more public fanfare than even the almighty Oprah. Is Michelle Obama being primed as the Democrat’s last-ditch effort to unseat Trump in 2020?

Without resorting to Google, who is Seth Moulton, Wayne Messam or Joe Sestak? How about Michael Bennett, John Delaney and Steve Bullock? Give up? They are some of the 25 Democratic candidates hoping to have a shot at leading their party to victory in 2020 against the seemingly unstoppable Donald Trump. And while there are more familiar names shifting haplessly on the Democratic bench, including Joe Biden, Elizabeth Warren, Kamala Harris and Bernie Sanders, what is already known about these candidates only makes a person want to know more about the Moultons, Messams and Bullocks out there.

In other words, in an age of identity politics, the Democrats are suffering an identity crisis that includes a total lack of purpose as well as character. Aside from their collective fits of rage against Donald Trump – who they understand can only be defeated by impeachment or alien abduction – the Democrats lack a unifying rallying cry that is not somehow connected to the Kremlin.

Meanwhile, the freshmen brat pack that has infiltrated the Democrat ranks in the persons of Alexandria Ocasio-Cortez, Ilhan Omar, Ayanna Pressley and Rashida Tlaib has pushed the political goalposts so far left that party moderates find themselves living in a different time zone. And when they aren’t busy rewriting the rule book in the middle of the action, they are attacking high-ranking members of their own party. This political ineptitude exposes the entire Democratic Party to Trump’s savage Twitter attacks that has them scrambling to defend everything from bogus charges of racism to the (deplorable) condition of Baltimore.

All three were Democrats

Only one well-known individual has largely been spared the mud and blood of the ongoing spectacle, and that apparent immortal is Michelle Obama, fresh off a nationwide book tour where, to quote the Guardian, she was “filling stadiums” while still finding the time to play surprise host at the Grammy Awards. Not bad for a woman whose previous claim to fame – aside from being married, with children, to America’s first black president – was revamping America’s school lunch program, which, it must be said, earned flunking grades from the student body. But let’s not let ancient history ruin a nice fairy tale.

The former First Lady has managed to stay so far above the steaming, fetid swamp that she is now being hyped as a hot political commodity in her own right. Anybody who is surprised by that information has not been paying attention.

“She’s a rock star at this point. She’s now a political celebrity,” Lissa Muscatine, co-owner of Politics and Prose books in Washington, D.C. and past speechwriter for none other than Hillary Clinton, gushed to the British tabloid.

Meanwhile, despite solemn declarations that she has no interest in a political career, such modest refusals – as Obama certainly understands – rarely hurts a person’s true political ambitions. And for those who would point to Michelle’s paltry political experience as a reason to disqualify her from further consideration need only look at her husband’s own lackluster resume to understand that that argument doesn’t mean much. After all, the mainstream media is ultimate kingmaker and has the final word on a person’s political potential, promoting or destroying any candidate as it sees fit. And make no mistake about it; the mainstream media cannot get enough of their darling Michelle.

In July, Barack Obama’s now better half was ranked “the most admired woman in the world” in a poll conducted by the market research firm YouGov. Exactly what she has done to warrant such global esteem was never remotely explained, but it was enough to edge out Oprah Winfrey, actress Angelina Jolie, and even Queen Elizabeth II, who had to settle for fourth place. Of course such lists have little meaning aside from providing casual chatter around the social media water cooler. What it does demonstrate, however, is that Michelle Obama will never have to worry about a hostile media should she decide in favor of a presidential run.

By way of example, compare the way the Liberal media reported on Ivanka Trump when she appeared at the G20 Summit in Osaka, Japan with her father. During a break in the deliberations, world leaders were gathered around in casual conversation when Ivanka found herself in the presence of French President Emmanuel Macron, British Prime Minister Theresa May, Canadian Prime Minister Justin Trudeau, and Christine Lagarde, the French head of the International Monetary Fund. When she risked a comment in the presence of these global powerbrokers, the media reaction was, well, as one might have expected all things considered.

A denigrating Tweet by Alexandria Ocasio-Cortez (AOC) perhaps summed up the reaction best.

It may be shocking to some, but being someone’s daughter actually isn’t a career qualification.

It hurts our diplomatic standing when the President phones it in & the world moves on.

Ivanka Trump appears to be trying to get involved in a talk among Macron, May, Trudeau and Lagarde (IMF head).
The video is released by French Presidential palace. 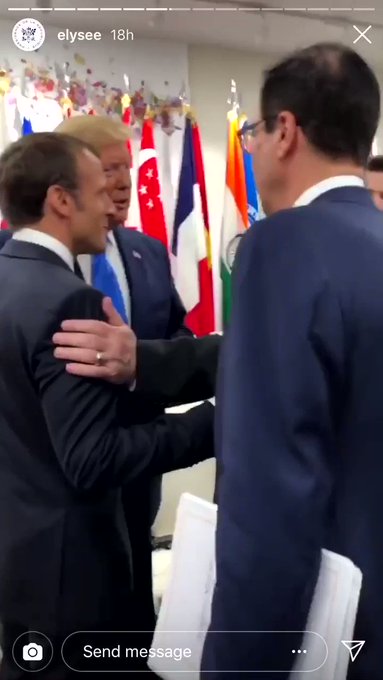 As a thought experiment, consider how the media would have spun the story had a woman, especially a minority woman, like Michelle Obama, been the interlocutor at the same global pow-wow as opposed to Trump’s daughter. But I digress.

Last year, an article in the Hill told readers exactly what they wanted them to believe: Michelle Obama is a “Dem rock star” that many want to see “run for president.” Again, the question: on what grounds? Why so much excitement over a woman with so little to offer in terms of political acumen and experience? The article enthused with a vague, meaningless explanation.

“As the country appears more splintered than ever, Obama’s aspirational tone gives the former first lady a high moral position within the party and American life. It is a similar tone Obama employed during her time as first lady, when she largely attempted to leave the political jabbing to her husband, focusing on children’s health and nutrition issues as well as assisting military families.”

The media, however, was just warming up. To prove they are not joking, none other than the Duchess of Sussex interviewed Michelle Obama for the September issue of British Vogue magazine. Yes, you read that right. Meghan Markle, acting as the first-ever guest editor of the “influential September issue,” interviewed Obama, I guess because that’s exactly the sort of thing a duchess does in between visiting various estates and equestrian events.

Still not convinced the Democrats and their media lackeys are up to something? The Vogue issue, entitled ‘Forces for Change’ – reminiscent of the worn-out ‘Hope and Change’ bumper sticker of yesteryear? – spotlights 15 influential women, including former first lady Michelle Obama and New Zealand Prime Minister Jacinda Ardern.

So at this point, what is it? Just a lot of media hype for a former First Lady named Michelle Obama, or more hope that she is the one Democrat with the media-generated star power, to dethrone Donald Trump?

Apocalypse Later? Trumponomics on the Eve of 2020 Presidential Election

The Empire Is Coming for Tulsi Gabbard