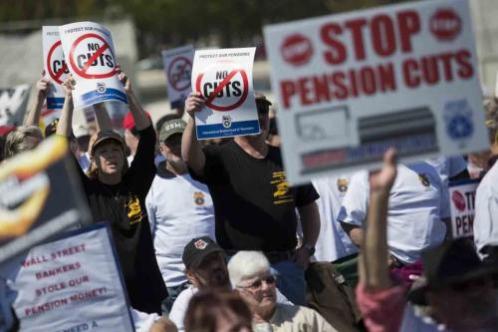 This article was written by Shaun Bradley and originally published at The Anti-Media.org.

Editor’s Comment: Decades of benefit promises to state workers, especially by socialistic large cities and left-leaning states, is reaching the point of no return. The promised money is not there, and there is no way to squeeze that much more out of the public – though many will probably try. Somebody is about to get screwed, and it probably won’t be the ones bailing out with golden parachutes.

Hordes of retirees are ready to cash in their benefits, but the coffers are running dry. Empty promises, smoke and mirrors are about to be exposed by the compounding pressure of debt piled to the roof.

Will this problem lead to bankruptcy for governments, or to riots and protests in the streets? What happens if the whole system ends up being one big I.O.U.? This is a huge problem that just can’t be overstated…

Pension Panic: The Coming Financial Bubble Nobody Is Talking About

For millions of public sector workers in the U.S., state-run pension funds are the only chance left for a comfortable retirement. In the hopes of providing a stable future for their families, an entire generation was duped into putting decades of their earnings into these supposedly ‘risk-free’ investments. Unfortunately, those who have entrusted the government to manage their life savings may end up destitute as a result.

Budgetary shortfalls that have plagued Detroit for years are now spreading to other municipalities. Since 2008, six local governments have been forced to renegotiate their debts in bankruptcy court, with many others on the same trajectory. The scale of the problem has been repeatedly understated by the media, but across the nation, a somber reality is beginning to set in.

States with large populations, like California, often find themselves in the spotlight when it comes to deficits, but there are several others that are in even worse shape. Illinois, New Jersey, and Connecticut are among those facing the biggest hurdles to meet their obligations to retirees. Instead of maintaining a surplus, politicians have continuously prioritized spending today on things like sports stadiums, for example, to ensure re-election. Policymakers on both sides of the aisle have echoed solutions that involve either massive cuts to benefits or shifting the financial burden onto the taxpayer. The price to prop up these insolvent funds will come in the form of higher property taxes, income taxes, and other stealth forms of subsidization.

The ongoing exodus of people from the Northeast to states that offer better opportunities and a lower cost of living is putting even more stress on the already fragile system. Pension payouts depend on the contributions of current workers, and as the labor force dwindles, so does the money available.

Pushing through substantial reforms is counter-intuitive for our representatives. If they do the responsible thing and defer excess spending in the present, it will undoubtedly have a negative impact on their voter base. America’s political pastime of kicking the can down the road continues, but the options to keep this shell game going are running out.

The rating agency Moody’s released a report in April of this year that outlined the scale of the shortfall:

“The unfunded liabilities of the various federal employee pensions systems, covering civilian and military employee benefits, amount to about $3.5 trillion, or 20% of US GDP…Additionally, Moody’s estimates that unfunded state and local government pension plan liabilities are of the same magnitude, bringing the total shortfall to 40% of GDP.”

These calculations don’t even include Social Security and Medicare, which compound the issue by trillions of dollars. As the baby boomer generation gets closer to retirement, the amount of money flowing out of these funds will only accelerate. Just this month, the Dallas Police and Fire Pension Fund was forced to freeze $154 million in withdrawals to prevent total failure. Emergency actions like this only serve to further erode the public’s confidence and foreshadow a bleak future for those anchored to the current system.

The promise of financial security from a bankrupt government needs to be seen for the fraud that it is. The ability to adapt when presented with unpleasant truths is crucial in this dynamic financial environment, especially when the path of least resistance has been rigged as a trap for those who fail to think critically about the future.

This article was written by Shaun Bradley and originally published at The Anti-Media.org.

An Unsolvable Math Problem: Public Pensions Are Underfunded By As Much As $8 Trillion