A startling scandal in our so-called criminal justice system is largely unnoticed by most Americans because the media in all their forms ignore it. But the American Civil Liberties Union does not.

According to a June 3 report from the ACLU, the “over-policing” of marijuana use combined with “staggering racial bias” are leading to appallingly high numbers of incarcerated African-Americans:

“Between 2001 and 2010, there were over 8 million pot arrests in the U.S. That’s one bust every 37 seconds and hundreds of thousands ensnared in the criminal justice system … Marijuana use is roughly equal among blacks and whites, yet blacks are 3.73 times as likely to be arrested for marijuana possession” (“The War on Marijuana in Black and White: Report,” aclu.org, June 3).

Citing the ACLU’s grim statistics, an August report from The Economist says, “blacks are almost four times more likely to be arrested for marijuana possession … in some places their arrest is over eight times more likely.

In other words, their lives could be essentially over. 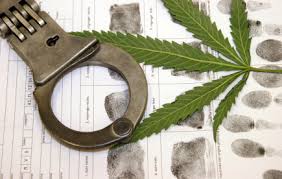 The leading, continuing source of documented information on this brazen American prejudice is marijuana-arrests.com, “an online library about marijuana possession arrests, race and police policy in New York City and beyond.”

The site is part of the Marijuana Arrest Research project, which examines “race, police policy, and the growing number of arrests for marijuana possession and other victimless crimes in large U.S. cities, especially New York City.” The organization’s co-director is Harry G. Levine, a professor of sociology at Queens College and the Graduate Center at City University of New York.

Furthermore, Levine, whom I interviewed when I was at The Village Voice for more than 50 years, has definitively reached a national audience in the Nov. 18 edition of The Nation magazine with his story, “The Scandal of Racist Marijuana Arrests — and What To Do About It.”

I admire The Nation for publishing this extensive array of revelations, but since its circulation is not extensive, I have chosen vital parts of it here as a public service. (As I used to tell my journalism students, I sure enjoy breaking scoops, but when another source has a crucially important story, it’s my responsibility to help circulate it.)

Writes Levine: “The vast majority (76 percent) of these arrested and charged with the crime of marijuana possession are young people in their teens and 20s.

“Over the last fifteen years, police departments in the United States made 10 million arrests for marijuana possession — an average of almost 700,000 arrests a year.”

I especially hope candidates for the presidency and Congress in 2016 hear this:

“Police arrest blacks for marijuana possession at higher rates than whites in every state and nearly every city and county — as FBI Uniform Crime Reports and state databases indisputably show.

If you live in any of these states, do you believe this should be the American standard of justice? Do those arrested for this “victimless” crime deserve to have their lives ruined forever? If you don’t think so, do you plan to organize and do anything about it — whether you are black, white or another race?

Thanks to Harry G. Levine’s report, let’s look at New York City, regarded by many tourists as the hippest city in America, and Chicago, which gave us the first black president:

“Since 1997, New York City alone has arrested and jailed more than 600,000 people for possessing marijuana; about 87 percent of the arrests are of blacks and Latinos.

“For years, police in New York and Chicago have arrested more young blacks and Latinos for simple marijuana possession than for any other criminal offense whatsoever.” (Italics mine.)

If you are black or Latino and have gone to any of the relatively few schools that actually teach American history, do you feel — after knowing these documented facts — that you still live in an America with a Constitution that’s fair to you?

Levine asks readers of all backgrounds to remember this: “Young whites (age 18 to 25), however, use marijuana more than young blacks, and government studies comparing marijuana use among whites and blacks of all ages have found that both groups use it at a similar rate.”

And here we come to the most basic source of accountability for this triumph of modern-day Jim Crow: “Such dramatic and widespread racial disparities are clearly not the product of personal prejudice or racism on the part of individual police officers. This is not a problem of training or supervision or rogue squads or bad apples.

“It’s a systemic problem, a form of institutional racism created and administered by people at the highest levels of law enforcement and government.”

Think hard about that. This entrenched Jim Crow system has existed much longer than the Obama administration. It’s far from the “new normal.” So how come We The People allow this to happen in the land of the free and the home of the brave?

Oh, it’s the press having failed us. Yes, but are the great majority of American whites so distant from the lives of black and Latino parents, grandparents and siblings that they don’t hear about members of these families being forever marred by criminal records?

Any American of whatever race who feels disturbed or worse, sickened, by what Harry G. Levine has spent his life revealing should read his entire article in The Nation. Then they should confront their elected representatives with demands that they restore the victims of these vicious, un-American Jim Crow laws to full American citizenry.