Bulls taking victory laps, bears crying, new highs on Friday in some sectors and charts settling the US stock market near a historically high 145% market cap to GDP.
What’s it mean? Nothing as of yet from my perch. It’s what happens next week and following the Fed’s 3rd rate cut meeting that may well decide everything. I can’t emphasize enough: The Fed has been on a tear in terms of intervention in recent weeks and is forced to intervene markets ever more aggressively on a daily basis (See: Intervention). A US military budget sized Treasury bill buying program, a daily repo facility to the tune of $120B a day, massive and unprecedented liquidity injections with little overtly apparent market stress.In context should anyone be surprised by $SPX drifting yet again into the 3,000+ zone? No. Not even bears. After all that price zone even into 3,100 has been clearly identified as a potential technical market zone, specially for the October 2019 time frame (see Combustion). It is what happens after the October time frame that will become a lot more interesting and how technical confluences resolve themselves:

In late June we also identified the 3,000-3,050 $SPX area as a Sell Zone and that has proven twice now to be an effective technical pivot to sell against. First in July (3028 high to 2775 low on $ES) , then in September (3022 high to 2855 low on $ES). Whether this third foray into this zone for the third time will prove to be a sell remains to be seen. But for now $SPX has yet to reach the 3050 zone, but may well do so or even a bit higher. But that too remains subject to evidence and proof.

Let’s drop some facts and charts:

There remains zero evidence that markets can sustain new highs as all highs in the timespan between 2018 and 2019 have been sold and any new marginal highs have been selling opportunities in the same way that dips have been buying opportunities. Bulls need to prove that they can make sustained new highs. That proof remains outstanding.

And that proof is complicated by a number of factors that suggest that these rallies are manufactured and weak despite some improving charts.

Most notable: Markets have turned into Zombieland, hardly any humans around, but the living dead walking around.

Volumes have completely collapsed. While shrinking volumes are a common aspect during rallies (as are increasing volumes during sell-offs), this here is not your daddy’s market. $SPY average daily volume has shrunk throughout the years and now averages around 73M shares a day.

Not this week. Volumes collapsed to the lowest volume week ever (outside a holiday week with a half day thrown in), with daily volumes barely making it to 30M-35M shares, it’s stunning:

Indeed 30% of the $SPY volume of the day occur during after-hours, that’s how deserted the actual open trading hours are.

And this is not a sleepy summer week we’re talking about, this is October. Record low volume in October? Unheard of. No, this market is so dead, nobody’s home.

One key potential consequence of little to no volume? When volume comes back, and it will, there is little in the form of support being built and a serious sell event/program can rip through support like butter.

What’s driving the low volume? We can all speculate, but I’ll offer a couple thoughts:

Impeachment? It is fair to say what we’re currently witnessing in American politics is unprecedented. I won’t handicap the merits of the events, but I’ll highlight the possibility that massive uncertainty is permeating the outlook, perhaps a sense that historic events are unfolding which may be keeping people on the sidelines until the smoke clears.

"The economy is in a good place" – Jay Powell

I could go on, but you get my drift, markets continue to rally on conveniently dropped China headlines, hopium and Fed liquidity in the face of weakening economic data.

Indeed, let’s talk about Fed liquidity and the market structure.

Have you noticed how all gains are driven by magic gap ups and then nothing but tight ranges void of any real price discovery?

Friday’s sudden surge on the heels of the $AMZN earning’s miss in particular took the vertical cake:

Massive ramp beginning in pre-market going full vertical, then another non specific China headline dropped on top of it and then: Nothing. Zombieland.  No volume, little to no movement. Again.

What’s driving these sudden surges in face of the data? Ask the Fed perhaps as every morning before market open they are cranking the liquidity machine now:

And so perhaps it’s no accident that on Thursday they upped their $75B facility to $120B, dropped over $134B in total liquidity on that day and magical markets print new highs on the next day as another $77B in liquidity rolled in. Massive liquidity + low volume = melt up.

Fact is the Fed is having massive problems keeping the secured overnight fund rate at bay and one wonders how much harder that will be for them when they cut rates for the third time this year.

On that note, know how absolutely hay wire their entire year has been:

A year in the life of the Fed.#study 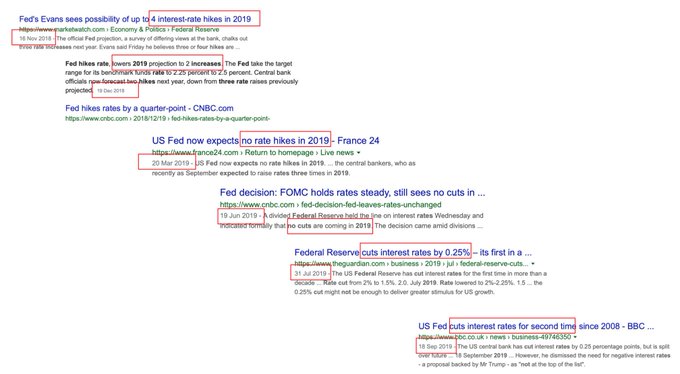 72 people are talking about this

What did Jim Cramer once shout? They know nothing. That wasn’t wrong then, and perhaps it isn’t wrong now.

I can only observe and what I’m seeing is once again ever weakening in the signals.

I repeat: The proof of sustainability remains outstanding.

A potential bearish candlestick pattern is making its presence felt on the charts:

The classic view of a hanging man:

The month is not over and a lot can happen next week, but it’s something to keep an eye on for month end as, ironically, this strength we’re currently seeing may be signaling a bearish chart signal.

And don’t forget there is precedence for a July high followed by an October high:

That marginal new high in October 2007 was a life time selling opportunity. The driver of that rally to new highs then? The Fed cutting rates in September all the while saying things were fine, no recession coming.

So where does this leave us? With slowing growth, multiple expansion and a market living off record low volume and perhaps artificial liquidity fueled open ramps with the $VIX crushed as a result:

$VIX filled one of its open gaps on Friday and may even tackle the next one down, but that’s a lot of $VIX crushing for very little gains achieved.

Indeed $VIX has approached key trend support while $SPX is once again confined to a very tight channel:

Until broken that channel has risk higher, but $VIX continues to signal risk much higher and perhaps some other folks are recognizing this as very bullish $VIX option trades were just placed.

As it stands that big megaphone structure is still intact:

As I said this summer: Bulls need to break above the upper trend line and then defend it as support to prove their case. And despite ever so marginal new highs printed intra-day during a record low volume Zombieland week bulls still haven’t been able to conquer that line despite all the Fed interventions and China trade deal jawboning headlines in the world. China deal going great is the tired daly rallying cry that keeps working despite the prospect of a China deal now having seemingly devolved into a phase 1 soybean deal that has been priced in over and over again since the spring.

Next week the Fed will be forced to cut rates again for the third time this year as they can’t afford to not cut rates for fear of disappointing markets. So far this year all Fed rate cuts have been sold. Bulls need to prove they can make sustained new highs. So far they haven’t, but have been living off of the artificial liquidity machine the Fed is so eagerly providing.

That liquidity injection machine may well succeed in causing a melt-up unsupported by fundamentals, but until I see anything structurally and factually substantive to support these equity valuations market strength and extreme low volatility conditions occurring on the underside of the upper megaphone trend line remain a selling opportunity. And there better be something substantive coming soon or this market is so dead.

All content is provided as information only and should not be taken as investment or trading advice. Any investments, trades, and/or speculations made in light of the ideas, opinions, and/or forecasts, expressed or implied herein, are committed at your own risk, financial or otherwise. For further details please refer to the disclaimer.

The Walking Dead: Something is Rotten in the Banking System