This article refers to GMO labeling, but also to toxic pharmaceuticals, harmful vaccines, and other chemical assaults on human health and life.

There is a myth that the free market wins out against all odds. The consumer decides. He buys what he wants, and doesn’t buy what he thinks is unhealthy. Pretty to think so, but false.

There is another factor at work.

It’s a crime to poison people. 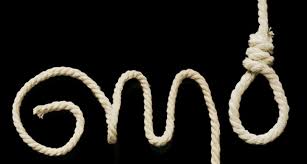 If you’re the CEO of a corporation which sells poison under any name, in any package, a state or federal attorney should have your ass in court, and then in jail. For a long time.

Label the poison products as “different?” That’s a stop-gap measure which comes after the failure to prosecute. It’s a solution put together with scotch tape and paper clips, and anyone who fails to realize that is sound asleep.

Unless…you really had a free market. If you destroyed any and all government enforcement-support and funding and phony praise of Pharma, big biotech, and other chemical companies, if you instituted a Wild West out there, a free-for-all, where anybody could sell anything and label it anything, then you might see some interesting results.

People dropping like flies, illness spreading like pools and lakes of cyanide, citizens gunning down sellers and purveyors and CEOs.

Then consumer choice would take on a whole new meaning.

But in this world, the one we live in, have you seen a single Big Pharma CEO put in prison for 50 years after killing thousands of people with a drug he sells relentlessly? A drug which he knows causes death?

Of course not. He pays a billion-dollar fine, after already making $30 billion on the drug, and he promises to straighten up and fly right.

If he’s a vaccine maker, he’s protected, by federal law, from civil suits filed by parents of children who died or were severely damaged by a shot.

If his factory releases toxic chemicals into the ground and water, causing cancers, he fights in court for years and ends up paying a settlement to families.

This is the sickening truth. And make no mistake, it is the government that protects and supports and bows down to these vicious criminals.

The government already runs its own labeling operation on pharmaceuticals. As skewed as it is, it’s supposed to give the consumer information he can use to make a choice.

But every year in the US, by the most conservative mainstream measure, those drugs kill 106,000 people. That’s over a million deaths per decade. (See Dr. Barbara Starfield, “Is US Health Really the Best in the World?”, July 26, 2000, Journal of the American Medical Association.)

Would you work in a campaign to force drug companies and government to provide more accurate labeling information, unless that campaign aggressively attacked the corporations and government for supporting and protecting poisoners?

And why would you even need to launch that attack in the first place?

Because the Justice Department is a criminal racket that protects sellers of poison.

They’re an active partner in a kill-and-maim operation.

Take off the sugar coating and look at the truth.

America is on a “Hot War Footing”: House Legislation Paves the Way for War with Russia?